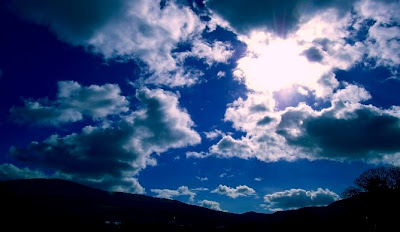 I took this yesterday afternoon as I knew today it would be too wet for the camera today. It's only good weather for ducks outside this friday, and even they have gone into hiding.. So a quick trip over to the nature reserve, at the back of my house, to snap this.

The Isle Of Man has (arguably, but it's claim is generally considered to be accurate) the oldest Parliament in the world, called Tynwald. The word again is Norse( as are so many relating to the island), and means meeting place or assembly. Founded in AD 979 it is definately the oldest continuous Parliament, with the 5th July, Tynwald day itself, not only a day of ceremonies at Tynwald Hill, but also a Bank Holiday for Manx residents.

Like the TT we suspiciously usually have good weather. Must be the Manx Fairy Folk working their magic.
Posted by Jane Hards Photography at Friday, April 11, 2008

Great lightning on the photo making a very good contrast.
Liked it a lot.

For one awful moment I thought you had posted a picture of Gorden Ramsey.. the mind boggled..

This is a beauty, and so is the history you mentioned..

Catch up again over the weekend..
Tom

Gorgeous. I love days like this. You have captured the lighting and perspective perfectly...

Fantastic shot ... love the color in this one!!

Love your picture, excellent shot.
I am always amazed how the sun, and the sky changes in an instant.
My pictures where taken a few days ago. Today the sky is grey and it is raining.

And, as for those Manx faires, where's that bridge, that every time you cross it, you have to greet them - massive memory falure here!!!

Louis likes the photo very much and found the historic brief on Tynwald to be most interesting! Louis thanks you for your return visit to "San Francisco Bay Daily Photo."

Stunning----what more could one say.

Thanks for the history lesson too. MB

I like this shot as well as the ones in the other posts!

What a beautiful sky! How cool that you can take a little walk and be in a nature preserve!

Looks like a big whole in the sky, very nice

Breath taking photo today. Love the saturation in the blue sky and how it highlights the sun and dark clouds. Nicely done.

Very nice to receive a comment from an old Norse settlement. I tried to get there in 2006 when we were going to the Lake District, but we were to late. Apparently we should have have booked ahead by six months since we brought a car.

There's a hole in your sky!

Good to know the weather is sorted for our holiday.
Dx

I love what you did with the colours. The deep blue is so beautiful!

That is impressive history. We think we are old? HA and the Isle of Man: I've always wished I could visit because I know it is beautiful. But this photo goes beyond what I ever imagined.

We do have some very nice skies. You should but them in a book.

Absolutely beautiful! I love the cobalt blue color of the sky!