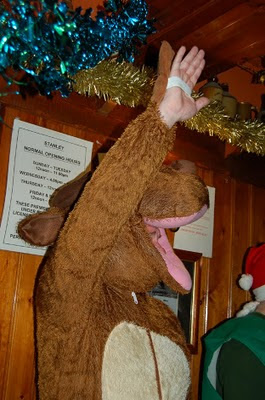 What can I tell you about the curiously named "Black Eye Friday" that you can't actually surmise from the title. Don't let the costumes (though this one inside was an angel) pic fool you. After a beer or several the residents of the town usually end up brawling. So what's it all about then?

Once a year this strange phenomenon happens, the last main pay day for most folks before Christmas a little earlier than usual. Now most of us are used to being relatively civilised and seem capable of going on a Friday night, let your hair down pub crawl, end of the working week type of thing we normally do. Costumes, hats whatever maybe worn week in week out. So no change there. Black Eye Friday though all hell breaks lose, and the younger folks tend not to be the idiots involved. Oh no, it's those middle aged men who go out once a year, can't hold their beer, miffed at their lives who are fully intent on causing a brawl....ending up with mass punch ups, a few smashed windows, pubs barring people and probably more arrests than for the last six months. Also the next day you will pass these shame faced idiots sporting the badge of dubious honour....the black eye.... hence the name "Black Eye Friday." Thankfully this idiotic behaviour occurs once yearly but does make me wonder is this sort or event unique to our island?

For more dips into other peoples lives around the world see here after 8pm.
Posted by Jane Hards Photography at Monday, January 17, 2011 19 comments: 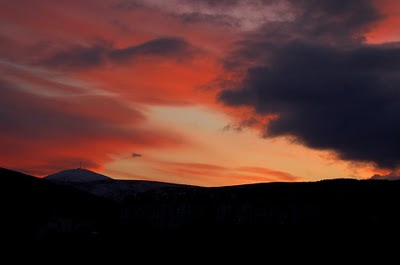 I'm going to keep this really, really short and sweet and just leave you with the image of a snow capped Skyhill under a fiery sunset. No waffling about life here on Toytown Island, mainly as I'm heading out later to hit the one horse town and actually get on with life so I can blog about it. Sure there is some logic in there, or a valid excuse to go for a drink. Back now after a gap of about a month. Caught the dreaded swine flu, which was rather annoying as I have not drunk with any swine for weeks! Ha Ha! I'm still doing humour though, this is not a travelogue.


For other skies of the world see here after 7.30pm
Posted by Jane Hards Photography at Thursday, January 06, 2011 28 comments: