THE SEAGULL HAS LANDED! 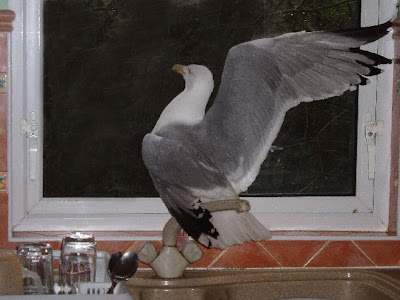 What is it with me and birds?

Two herring gulls were fighting in the back garden. I tried to separate them with a broom, the weaker one flew into the house and proceeded to have a mad half hour flying about. Managed to shoo the other one away. By this time the gull above had decided to sit where you see him now. At this point in the proceeding, I just had to take his pic, having texted my other half to tell him we had a gull in the kitchen. Now even for me this seemed in the realms of fantasy, as only so much can happen to one person, as far as birds are concerned, so pictorial evidence was required.

Now, getting him out was another challenge in itself. More shooing with brooms until he retreated to the garden , straight behind the oil burner. More problems! He sat there for about 2 hours, came out of his own accord, flew off and left me with a big pile of seagull mess as a parting gift for my trouble. You have no idea how much a scared seagull can pass. It must be me, beacuse I have moved house, even country and the birds still go crazy around me.

Katney's Kaboodle is also the place to join Odd Shots Monday and see other wierd and wonderful shots from fellow bloggers.
Posted by Jane Hards Photography at Sunday, April 27, 2008

Comment on the previous post. I never saw a "goldfinch" like the one you posted. Those around here are a bright yellow (males) and a olive green yellow (females). I am tickled to death that you did rescue it though and gave it something to eat and drink. Nice work you do.

This post with the seagull in the house is really nice to read and see and imagine. I have a habit of leaving doors and windows open when there are squirrels about and raccoons and chipmunks and rabbits and all shapes and sizes of birds. My wife of 52 years claims I will one day have either a heart attack or a stroke trying to get one of these creatures out of the house.

Of those I mentioned, I would guess the most laughable for us would be the squirrels as they can scamper up everything.

Glad you took a photo of the seagull sitting in the kitchen, your hubby might not have believed your story! (LOL)

btw ~ all your shots are great ~ thanks for sharing.

I loved your picture and this story! Poor scared thing. I also enjoyed reading about the goldfinch.

Seagulls make a seaside noise which is great for the townies here on hols but they have such bravado they will nick your sandwich, chips or pasty right out of your hand. They have mean eyes don't you think. Like the pic. though.

Funny post! I think it's a great shot instead of an odd one.

this has got to be one of the weirdest sights i've seen in a while!

The seagull in the house is really nice to imagine.
And read.

I have a habit of leaving windows open in summer, and last year my wife got a big scare because a bat (small one, poor lad) came flying from outside almost crashing into her face.

We heard a big scream and went to the bedroom where she was to see what had happened. She was a bit scared and told us (me and my twin daughters) a very big bat had attacked her!!

My daughters just stood there kidding her telling maybe it had been Dracula himself ... guess the laughter when we found a tiny bat shaking in fear hidden near a jar we have in that room. It was roaring!!!

Now the whole thing is odd and so interesting that you had that bird coming in your house, my goodness that would be a site to see

Lol... very funny! I've had that happen to me and have had better luck just leaving the door open till they go out on their own, eventually...

Thank you, this is very funny story in your post.

Oh my gosh that is odd and so interesting. Great catch.

Around the World said...

who but a blogger would take a photo before going back to her broom?

I had many a bird in the house when we lived on our Irish island, including a swallow that flew in, around and out again, but I've never had a herring gull! I'm glad about that - two hens and a cockerel were the worst to get out.

I'm so glad you stopped to take the photo. And I love your title!

Woohoo, what a story!

I laughed and laughed thinking of you running around chasing birds with a broom! Glad you have pictorial proof!

I usually don't read stories, but smth cought my attentsion, smth what was very real but strange (weird and odd, of course too) at the same time. That was the information in the picture, shocking notes of a big event...
Yes, you have a real life!

Great picture today, what a mad time it must have been!
Today I'm saying a huge big thank you for the support shown by CDP bloggers.

Another lovely picture, Babooshka. As the others have said, it would have been quite a sight to see trying to persuade the bird to leave with your broom. I enjoy all you pictures and descriptions even if I don't always leave a comment. Excellent work.

And this, my friend, is why I love coming here!

your photos are always such a pleasure to see, and your comments are so well written! I am laughing like you wouldn't believe. Scenes from The Birds come to mind, and I wish you had a photo of you and your broom...
: )

Lots of goodies on this blog! I understand, I've found some incidents with animals and birds etc to be unique yet quite a drama out of all proportion and I'm an animal lover.

I thought it was meant to be a funny post? It wasn't making a drama out of a crisis, Julia! I found it funny. You write in jokey way and play up to it. I am right aren't I? I do read it all the time.

Thanks for a great chuckle! And another fantastic rescue!

A bird in the house always leads to a good story. I enjoyed this one.

I'm impressed that you stopped to take a photo despite all the commotion! And he certainly strikes an impressive pose on your sink. Before I put screens on my windows, I used to have a sparrow that would fly in one window, land on my nice black sofa, leave me a little white present, then fly out the other window.

Excellent pic and story, and I understand what you mean about having a thing with birds!

I have a couple of wild doves who walk in and out as they please. Even when I'm sitting watching TV, they feel comfortable enought to come in and share my African Grey's left-overs with him.

Occasionally something will startle them, then they fly around looking for the door. I usually just sit quite still and they settle down and find their way out.

aw poor things, both of you!
I bet he was absolutely confused and is now mortified that he let himself go when you did him such a favor.

Birds can be a bit scary because they're hard to read. You don't know if they're going to go berserk or what. Great story!

Oh wow- I did a double take when I saw it INSIDE! Grat picture! (And Wow for taking the time to photgraph it!)

Odd for sure, when i say it I thought it was some kind of funky decoration, Great capture.

Seagull AND the kitchen sink. You really go all out to illustrate you stories -:)