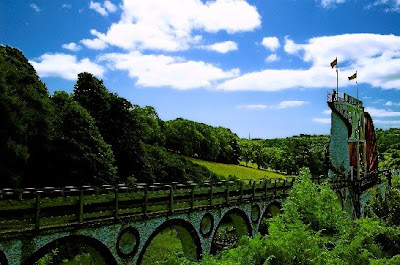 As you can see, we have escped the snow flurries today. We had about 15 mins when we had hailstones, but that was it. Snow is a rarity here. So our day in Laxey went ahead and I was able to take this photo looking onto the Wheel from the hillside

Laxey Wheel, The Lady Isabella(named after the Lieutenant's Governer's wife ot the time) was designed by John Casement in 1854 and used to pump water away from the mines. It still remains the largest working watermill in the world. Now one of the main tourist attractions on the island. The brave, for a small fee can go to the top and survey the land around.

The Triskelion, the 3 legs of man symbol displayed is the national image of the island and is actually the wrong way round.They forgot to reverse the image when it was transfered and so remains the opposite to it should be. Incidently you may have seen the 3 legs symbol on another islands flag, that of Sicily. The Wheel even has a piece of music dedicated to it by Stuart Slack.

Laxey, is again Norse and means "Salmon River." A normally sedate town, although the quiet is disrupted once a year for the Laxey Blues festival, where virtually the whole town is turned into a mini Glastonbury, without the mud, and good time is had into the early hours by all.
Posted by Jane Hards Photography at Sunday, April 06, 2008

Hello Babooshka. These picture are really lovely, and make me want to visit the Isle-of-Man even more. So, perhaps one day I will find the energy. I have been enjoying every one of those pictures even when I am lurking.
We had an inch or so of snow down here, and it survived until lunchtime.

Your first weeks of blogging are rather successful :) I love the pictures you posted and can't even tell which one I like best - all of them are stunning! Keep going!

And thank you for visiting my blog, you comments are a treasure for me.

We are snowed in today, no access by my car ...still I am warm and the shopping is being delivered between 11 and 1...how's that eh!
It is my first post in a new bridge photograph project. Check out my blog & see the link to Rune who has organised it, I think you will find it very interesting!

Hi from Rabaul and welcome to the family

Great spot and love the photos.

Still no snow.As you can see I am trying to pass on little snippets of info. about the island with each photo.

Lovely green countryside. Hardly think about snow when seeing so much green. Love to see that waterwheel sometime. Great information in your post.

Thanks for stopping by my blog today. ~Chuck

Thank you for the Laxey photo.
Do you have anyomre?

Absolutely, Babooshka. Make us all want to come and visit your lovely island! I need to try and find those webcams that I had bookmarked last year.

I think I found one of the webcams I was thinking about:
www.dotet.co.uk/index.php?type=webcam&name=laxey
You used to see the tram parked there at various times. But I guess, from one of your posts (in Purple Haze), that the tram doesn't go up there any more...

WOW what a beautiful picture, I am loving your daily photos thanks for sharing.