THE CALF OF MAN 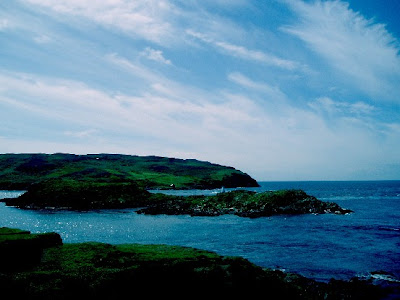 The land to the top left is known as the Calf of Man. A tiny island seperated from the Isle Of Man by the stretch of water known as "The Sound Of Man." Calf derives from the Scandinavian word "Kalif", literally meaning, smaller island lying near a larger one.

Prior to 1939 it had several owners, icluding, norman, danes, and celts.It 1939 it came under the ownership of The National Trust. Subsequently it is now owned By Manx National Trust and now a bird sanctury which, weather permiting can be visited by boat excursion, at certain times of the year.The Manx Museum in Peel is now home to of one of the islands great historical finds a stone panel, possibly from an alter. It dates back to the 1st half of the 9th century, celtic but with a byzantium style, of which similar are to be found in Ireland.

Worthy of more than one visit, this tranquil and rugged area is home to passing seals, basking sharks, the odd minke whale, dolphins a and a variety of shorebirds. In recent years a great place for experienced sucba divers to explore, tourists and obviously photographers.
Posted by Jane Hards Photography at Monday, April 07, 2008

The best place to dive.Will you do some more photos of Laxey.The photograph is really pretty.

Yes, you sre right, the tram will now only be running one way between Laxey and Ramsey, but as yet we don't know which way.

Very interesting names...calf of man and sound of man...

I love little islands - there's the calf of Eday up in Orkney.

Great blue on the sky.
Great photos on this blog too.

looks really beautiful. What are the origins of the name.

The colors are magic! Did you use a filter of some sort? Très beau.

No filters, but i did have the setting on for cloudy and the ISO at 800. I do this quite often on a sunny day as it intensifies the blues and greesnsof which the island consists of.