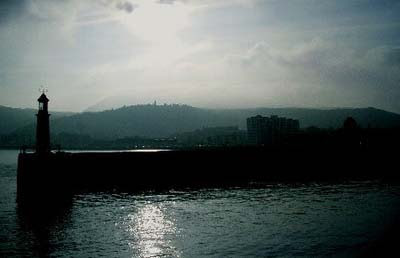 On  a not so Clear day
The Isle of Man is often used as film location, sometimes studio work other times outside locations often doubling for many other countries or England of yesteryear.  From Keeping Mom to The Libertine many Hollywood and smaller independent production companies make use of the stunning locations which just happen to be in my world. One of them is the lighthouse above which featured fleetingly in the film On A Clear Day

On a Clear Day is a 2005 comedy/drama film written by Alex Rose and directed by Gaby Dellal. It stars Peter Mullan and Billy Boyd(a former hobbit)

After 36 years working as a labourer in the shipyards on the River Clyde (in Govan, Glasgow), Frank Redmond becomes stagnant and quickly sinks into depression. A naturally strong swimmer, Frank gets an idea while on a 'booze cruise' with his friends to swim the English Channel to France. A simple but heartwarming tale, especially relevant now with so many people thrown on the scrapheap again during this next recession. A movie of hope just to make you smile, and that's not a bad thing is it?

The lighthouse is not the only landmark in Ramsey to feature in this film. Queens Pier also features in the very first sequence and later in the film. Coincidentally it's also featured here for a previous my world, skywatch and abc post.  Click here to see one of those posts.  Just before I started this blog we had a weekend away across in England. On the way to the airport we passed a tent in a field. Nothing special about that you might say. What if I told you that tent had the one and only Burt Reynolds in filming A Bunch of Amateurs. If only I had know I would be doing this blog I would have stopped the taxi to the airport and got the camera out and got his pic.

A very excellent photograph.
One of the best.
The way the whole mode is conveyed is brill.

Lovely photo. I am sure more films will be made in your beautiful part of the world.

Most interesting post, plus great photo of the lighthouse.

I remember Boyd...and yeah would be cool if you got Burt's pic (calling him first name as if we knew each other huh). I wouldn't wonder why ramsey is chosen for, from what you show us everyday...filmmakers know where the best location is!

Nice photo of the lighthouse, clouds, and sunshine. Plus I learned something. I didn't realize so many films were made there.
Thanks

Well done Babs. Totally breathe taking view like a dream hun. You only need one photo and you always nail it and I learn a lot. The best Isle of Man Blog my a Manx Mile. No one can get close to taking an view of Ramsey like you do. Ramsey should be proud, 'bout time it show'd it.

Not all Scotland then. Nice info.

Seems I've missed out on seeing the IOM on the silver screen, as I haven't seen any of the films listed on that film website.

I'll have to make do with Bab's blog photos.

Babooshka: What a neat and fun post on your island. It's wonderful that the island still has the old world charm.

This is such a beautiful shot, Babooshka! Sorry I took your snow, maybe it's on its way because it's gone now :D

How spooky that I chose Ramsey Harbour as well for my post this week though none of my images are as dark and mysterious as your brilliant shot. Love it as normal and thanks for putting our little town of Ramsey on the map.

Nice pic! With views like that, no wonder the isle is in movies.

Cool my world photo. I don't recall ever seeing anything filmic or TV-ic (are they even words?!) being shot in Cheltenham.

A very nice lighthouse on any kind of day! Nice photo.
Our Marlborough Sounds have been known to be shown in movies from time to time.
Merry Christmas to you.

A beautiful picture! I didn't realize so many films were shot (at least in part) on the Isle of Man.

What a beautiful and moody photo! Wishing you Happy Holidays and all the best in the New Year!

I can see why your world is such an attraction. Very gorgeous!

Rupert Grint came to Ramsey. Did you see him? This is a nice photo.

There was a thought provoking movie I saw about two years ago, about an estranged father and his two sons, which started with a scene of the youngest of the two boys up on that tower, and his mother coming to get him. It was quite the powerful allegory used later towards the films conclusion.

The filmography adds to the intrigue you have so well-created for the Isle.

Never seen that movie but I've heard others mention it being good. I'll have to put it on my Netflix list sometime.

My only brush with fame like that was passing Hulk Hogan and his body double while they were on the campus of Stetson University filming a movie (which I'm sure was never big and is now forgotten, lol).

Your island portrays a lot of charm and self contained magic. Wishing you warmth through the Holiday Season.

Having seen your piccies each week, I can totally understand why it's a popular film location. Lovely piccie and love the tent story! Merry Christmas.

B,
This is a quiet, lovely shot . The monotone shade is very interesting as well. I have never really experimented with colors like this. I might have to fiddle a little. Thanks for your continued comments and suggestions. I always appreciate as you know.
Christmas wishes to you and G.
V

What a beautiful view. I think I was stood in that exact same spot the other day it didn't look as nice as that though.

Beautiful..I came to catch up..So this is with a borrowed laptop that is acting strangely? I would really hate to live without mine as using the desk computer ties me down to the office and then I would have to arm wrestle my husband and of course he would win...yadda..yadda.. Love your jackdaw as it reminds me of our blue jay.. With all our snow, they are in to visit the birds feeders often and I put out peanuts for them. Lovely photo below also. Happy Holidays..I hope you get some good news for the new year as you certainly deserve it..Michelle

So many films. Who knew.

I'm sorry you have no snow. We have had our fill of it. Sending some right on over if you don't mind spoiling the view.

Yep, you're right. Seems I've seen that lighthouse scene in many films, as well as, Queens pier. Maybe it's your posts I'm remembering. :)

Love the mist in this shot. Great story. Too bad you missed the chance of a Burt pic.

Should I run into the movie i'll keep an eye out for the lighthouse.
Didn't the Libertine have Johnny Depp in it? Please tell me you had a pint down the pub with him...

Very nice indeed. Glasgow is used for films too, but usually the grittier ones it has to be said.

A very moody photo and interesting commentary. Our hospital was used for filming a couple of years ago and it was most interesting to watch the process over two months. It was even more interesting to see the movie at the theatre.

Beautiful pic and info.
As for having no snow---maybe you are the lucky one. We are not used to having snow---we have your weather- rain rain rain. Now I don't want it to rain--with all this snow we will have slush and flooding. boy, if it's not one thing it's another. So..... I guess we all should be careful what we wish for. LOL MB

Wow. Great capture! I love the near silhouette and the sparkling water. Excellent!
:-)

I love this mysterious photo! I can well understand thast this place is chosen as a filmset. It's beautiful!
Babooshka, I wish you a very merry Christmas and an excellent 2009.

I which you a Merry Xmas and a Happy new Year... and keep on with your great blog.

Lovely shot and nicely composed.
I wish you and yours a merry Christmas and a great new Year!

Around here lighthouses are towering structures mostly 100' or more high. So this guy looks practically travel sized by comparison. But it makes a striking photo nonetheless.

hope you and Gary have a great Christmas, chickie!

Thanks for sharing your lighthouse in unclear day. From the list of Isle of Man movies the ones that stood out for me were: Thomas and the magic railroad (kids love Thomas) and Waking Ned.

what a wonderful post..i find something romantic and alluring about old lighthouses and harbours

How lucky you are to live in such a scenic place, and how lucky we are that you share it with us.

Great image and interesting read!
That must be exciting - and having a good story in these times is good as well!
Have a very merry Christmas and a good start into the new year!
Cheers, Klaus

I love lighthouses, Babooshka! And your is amazing! I watch for your special lighthouse in the movie! Have yourself a happy Holiday! :)

The wonders that cameras can capture.

What a gorgeous shot!