ABC - X IS FOR XENODOCHIAL IN THE XTREME 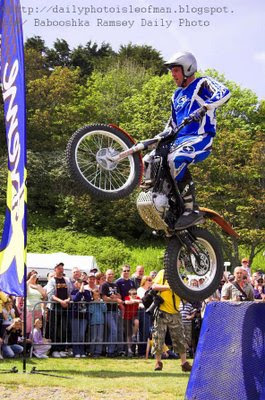 Are you Xenodochial on New Year's Eve?
X
X is for Xenodochial In the Xtreme.
The image is a favourite from Ramsey Day, the fun day we have in Ramsey when The TT Road Races are here. Look at the pennant on the left and you will see the word Xtreme, and an X on the riders shirt for Xtreme, the people behind the stunt bikes. What of the other X though?
For those of you who know my blog you know I first found this word for my 1OOTH post. What of it though. According to varied sources it's an archaic, bookish, obsolete word rarely used word for Southern Hospitality. Think Gone With The Wind. Xenon is from the Greek for stranger as in xenophobia fear of strangers and therefore the opposite is xenodochial. Strange isn't it that the obsolete word is the friendly one and the uglier word is in still in every day usuage. I'll let you ponder that little irony, but what a fabulous word to describe this year of blogging, the cdp and y'all out there in the bloggoshere you have be so kin to lil' ole Scarlett, I mean Babooshka. You're welcome to folks.
Xenodochial New Year's Eve To Y'all.
Hop on over Mrs N. To play Abc.
Posted by Jane Hards Photography at Wednesday, December 31, 2008

I do love the ingenious X's folk have unearthed this week.

You have the X Factor. Cheers B.

What a bunch of creative X is happening here! Have an Xtra Xciting New Year Babooshka!

Fabulous and unique word for today and I love the photo! Happy New Year to you, too! :D

Xtremely interesting. And a xenodochial New Year back to you.

I'm not sure what is best - the photo or your Southern accent! Um...the photo. Defo! :)

Never heard of it but happy NYE too.

And the very same to you too. Fun shot and interesting information.

That would be xtreme fun .. but unfortunately not for me. Great shot.

Babooshka, I learn something new every day in Blogland! I've been particularly impressed with all the creative X posts this week, and yours is at the top of the list. I'm trying to remember what I learned in studying the Iliad, but didn't Xenon also refer to hospitality in the Greek culture? You're right--why did we keep the negative definition?

Wishing you a happy New Year!

Well bless your heart Dahlin, for that nod to the south. Ya'll and all!! Whoooeeee, I've gone and converted Miss Babooshka. Me likey!
V

Thanks for teaching me a new 'X' word. Have a Happy New Year.

Congradulation on the 100th word!

Wishing you a very happy and prosperous new year!

May the coming year bring to you, the best yet!

I know the root "xeno" in the word xenophobia but did not really know xenodochial ... i like the word, though. Thanks for the vocab lesson, B! That's useful.

I like the x-treme action captured in the photo.

Since this will be my last comment on your blog for 2008, I'd like to wish you A VERY HAPPY NEW YEAR! May 2009 be a year of peace, prosperity and progress for all of us.

beautiful picture of this biker.
I wish you a Happy New Year 2009.

Great choice - and I'm sure he didn't get Xed-up.

i'm glad you explained that word!

The Isle of Man in general seems to be very xenodochial.

I love that!Wish you a very Happy New Year!

Хвала! That's how you write "thank you" in the Serbian Cyrillic alphabet. The "X" is an "h" sound, making the word "hvala," pronounced HVAh-la, if you can manage that! We're giving language lessons today!

Very good post about X words, though they are difficult ones. Bloggers always find the right words!

I wish you and yours a very Happy New Year

To find and to use an old word is an X traordinary idea, and I agree with your clever analysis "Strange...usuage"...
In french, the opposite of "Xénophobe" is merely..."Xénophile "
Happy new Year!

I opted for xenophobia, and, like Miss Yves, know the opposite xenophile - it's true, you can learn something new every day on the Internet!

Brilliant X Babooshka. Hope you and Gary have a great 2009. All the best for the future.

I have enjoyed your photos, knowledge of your home and the tips you have given along the way. I hope you and Barker have a xenodochial new year.

Hi!
Thanks for the info on that word!! The Photo is eXcellent!! Have a great New Year!!

Y'all have a Merry New Year, as well. Xenodochial, if you wish! LOL

So weird indeed that it is not used anymore. Maybe our world has gone mad and forgotten all its xenodochiality?
Great X nevertheless.
Wishing you a brilliant 2009.

Babooshka, I wish you a beautiful new year.

This is a new word for me and I LOVE new words! A well written post as well!

New year'S to you happiness, and quiet and the welfare will bring.