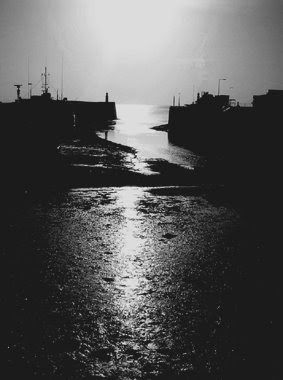 Ramsey Harbour Silver Shimmer
Well the monochrome bit is obvious but what of the odd? How often do you see sunrises or sunsets without colour? Think of all those skywatch shots we all see every Friday, mainly sunsets. Isn't it the colours mostly that prompt us to leave complimentary comments? Does sunset or sunrise look odd to you without layers and ribbons of colours? In fact without colour in an image can you still relate to the image, in this case being a sunrise? Back to the harbour.


Whilst undertaking further research about Ramsey Harbour and it's past I happened upon many a quirky tale. One, I am really hoping to post sometime, but I want to separate the myth, legend and fact. History remember isn't always what actually happened but who committed it to paper.


Ramsey Harbour still is a working harbour, though not the grand shipbuilding harbour of yesteryear. I've mentioned previously of The Star Of India known as the Euterpe as the most famous ship built here but not of The Jane.


Mid 19th century Ramsey it seems led the way in shipbuilding. The first ship designed to carry bulk oil, commonly known as an oil tanker was built at this very harbour and name "The Jane." Apparently The Jane transported oil around various places of which the only one I have found named is Philadelphia in 1853. Again I find out a cute little story and find the trail ends abruptly.


I've asked about The Jane before. No further news on it . Any ideas anyone?

Want to join the weird world of Odd Shots Monday? Then see KATNEY

Want to join the beautiful and creative world of Mononchorome Monday? Then see Aileni at LOOSE ENDS
Posted by Jane Hards Photography at Monday, November 24, 2008

It makes a simply brilliant B&W - it is the kind of shot that works well either way and both media can show their strengths.

Wow - it looks more like a moonrise thanks to the B&W.

I know as much as you have found out.
The sunrise is strange without colour, but I really like it.

I like that in black and white so much. The light and dark are brilliant.

I thought it was a sunset so your right, great shot.

I got the sunrise(set) part, but it does look a touch odd with only the tonal range to define it. Not that "odd" equals "bad"; far from it! Just agreeing with your point about the ohh-ahh factor that color so often plays in shots of sunrise or sunset.

But B&W suits this image perfectly in my view. It gives it the feeling of a war-era naval movie. You can almost hear John Wayne's voice.

I thought like Jackie that it was a moonrise...nicely done, babooshka...

Perfect for B&W(monochrome)Thank for sharing and also Thanks for commenting on my MM.
Have a nice day.

As I looked at the photo, I felt apprehensive, like something bad was about to happen. Now if there were bright colors, I'm sure the feeling would have been more cheerful. Still, I like the black and white version.

Are you still here?

I like the b&w, teh way the light plays creating a freshness, newness against the dark hard line of the harbour and ships. well played.

encore un superbe b&w, on dirait la photo de la fin d'un film.
a superb b&w, it looks like the photo of the end of a film.

wow! this shot is simply fantastic :)

That is a very serene shot.. so pretty!

My monochrome shot is posted here. Drop by if you have the time, thanks!

Great photo! Thanks for posting :)

Even if I can't have the layers of colour I'll settle happily for that ethereal silver.
The Jane, I wonder who that ship was named after...

Ooooh, I really like this. The lighting is wonderful. It doesn't need color. In fact, I think particular shot says more without the color.

The "wow" factor for a sunset or sunrise in colour is obvious, as you mention. I left the colour of the yesterday's sunrise in my photo today, because the rising sun was already so visible that probably in black and white it would not have had the same effect.

I totally agree with you that the indirect sun-light reflecting in water is marvellous, as it creates those different silvery shades.
Have a good week!
Diederick

I love the Silver Shimmer. I think the strength of the light points to sun rather than moon, and the black sets it off wonderfully.

Before I got a digital camera almost all of my pictures were in black and white. This reminds me to go back to playing with shadow and light.

I have seen something about the worlds first oil tanker somewhere. If I managed to remember where (and it is relevant), I'll let you know.

Nice one about how history is made! Not everyone knows that.

I would of said moonlight. I take your point about colour.

Interesting question you pose... you've shown the sun on the sea has a sparkle all it's own with or without color. Love that shot!

That may be an intriguing piece of research. Keep on it an share when you find out.

You offered us a new conception of sunrise. B&W gives a certain strength because it just remains the light.
I love the black frame it gives to your picture.

I don't know if this is your Jane or not but it is an interesting tidbit:

Wrecks around Shetland
The Jane was an iron steamship of 840grt that ran ashore on 19/07/1923 due to a navigation error. The wreck now lies on a sandy seabed in 20m of water in an area of strong tide, keeping her clear of silt and covered in marine life.

The Jane was an iron tanker, I think. Try some of the maritime sites. Good luck. Cool photo.

Hmmm… you're right about not seeing many monochrome sunrise and sunset photos. But it definitely works here! Very atmospheric result.

Makes me want to climb aboard and head out into the wild not so blue yonder...

I find this seascape odd primarily because of its unusual perspective but no less pretty because it is in black & white. Nice job!

Jc & Runne- Thanks for the Jane info.

Jc- I've had a look at that site and i'm convinced it's the same one.

I don't find this ODD at all. What I do think is that it is AWESOME. It would make a fantastic large print.

It has an allure in b&w that it wouldn't have in colour I think.

It looks like the harbor drops off at the edge of the world.

A very involving composition and I love the light ..

I like how the bright light, reflecting on the wet sand, takes your mind away from the lack of colour.

the monochrome really draws my eye to the light at the center. head toward the light! crud, now I sound like Shirley Maclaine.

The isle of Man is very pretty...

beautiful controluce... And in B&W even better...

Hello! A Wonderful photograph, congratulated you can i. Achievements, may it be easy. Good days.

That is a GREAT shot!

This looks very much like a shot from the 1940s.