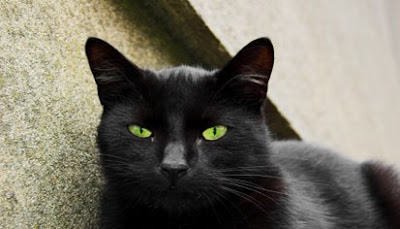 Following on from "Hop Ta Naa" the Isle of Man celebration that is now intermingled with Halloween I give you "Ginnie The Witch." Alternative spelling of Jinnie can be found too. What do witches have, a black cat of course. This one isn't actually true black if you look closely, but the eyes are true green. Back to Ginnie.

Ginne the witch is the "Manx English" version of the Hop Tu Naa from yesterday. Here's the poem. Well two versions of the poem. Just to be typically Manx, why have one just one version.

Jinnie the witch is in you house
Give me a penny and I'll chase her out
Hop-tu-naa, Traa la lay

More Manx Madness on Ramsey Daily Photo. The original one. You will always here it here first.

For more wonderful camera critters see MISTY DAWN Camera critters and be sure to leave a nice comment for Misty' s own outstanding posts.
Posted by Jane Hards Photography at Sunday, November 02, 2008

Such lovely green eyes - so striking against her black fur! Great shot!

I'm off to bake some bonnags!Lovely cat.

Even though some people think they are bad luck; I do not. :-) I think it is a beautiful cat.

couple of beamers there!

love the poem and the kitty is gorgeous! Thanks for stopping by my blog :)

Baboshka, we're leaving you a wee thanks to you in our Nov 3 post. Rules, etc., are there if you want to continue the thread.

OK, not at all a cat person, so I'm making a quick exit now.

Ginnie is an adorable little cat, such a pretty face. Great photo!

That cat is sure scary. Weren't u afraid to go so near it. I have this incurable fear of cats. I'm more of a dog person.

Super black cat - but then they are, aren't they.

Is Ginnie a true Manx cat?

This looks like the black panther we have since our daughter moved back in with us. He bit me too but now, after several weeks we are becoming good friends.

The black cat appears friendly. How about ginnie the witch? A healer of sorts? Fascinating folk lore.

Lovely! I was watching QI the other night and it was the one with the terrifying cat - it kind of reminds me of that lol!
Ciao

Beautiful cat! I love black cats and the way they LOOK at you.
I've enjoyed your Hop-Tu-Naa posts.

Another great post! I'm really enjoying learning about all the quirky customs, lol.

Great cat pic! Cats always remind me of the virtues of keeping quite and acting deliberately. Even and idiot can look wise when they act like that!

Thank You for the text...

She has gorgeous green eyes! Cute poems too.

Lovely green eyes this witchy kitty has. The poem is a nice addition. BJ

Hi!
That's a beautiful cat!!! And loved the poem! Thanks for stopping by my place. Take Care!!

Beautiful cat!
I have read that in Spain belief is stray white hairs on a black cat bring good luck
I have had a couple black cats, I love cats but stay away from owning black ones as they seem very skidish...
the eyes are gorgeous

love the green eyes! and love the song too, I dont think we have any halloween songs here in the U.S.

She seems to be saying MEOW! Who the h-e-double hockeysticks gave you permission to take MY picture?!

I hate when cats half shut their eyes when you take photos of them.

I read your postings about the Manx Halloween traditions - all is very-very interesting; and tried to find some connection between Norwegian language... too many thoughts to comment here...
PS. Thank for visiting!

What a lovely kitty!
Those green eyes are stunning.
Thanks for sharing the poem with us - you so do your research and well I might add.

Gorgeous cat...we've owned two black and they are always the sweethearts. Very nice photo as well!

What a great photo of a natural beauty. I have thoroughly enjoyed browsing your recent posts. Please, if you have a moment, check out the start of our latest fun, at ELLEA, #1, or Edna, Lucy, and Lynette’s Excellent Adventure, #1.

Gorgeous crutter! And perfect for Halloween weekend! I was checking out the front page of your blog, you are a wonderful photographer! :-)

Hi little sweetie kitty! You're quite the internet superstar, I hope someone told you!

I must be a witch ! I also have a black cat !
Your cat looks cute !

This is just wonderful .. our Gus who looks just liek this has cataracts and his eyes are no longer clear now and they reflect the flash so I dont have many open eye head on shots .. this is how he used to look when he was younger .. thanks for reminding me!

She's got such pretty eyes.

How can you have posted this within the last hour and have this many comments already?!? I thought I was on top of things!

I guess that's what happens when you have such a great blog. Congratulations!

It's funny...I kind of have a self-contest going. The most comments I've ever received on one photoblog posting is 9. It's happened twice, but the second time, unfortunately, simply tied with my previous record instead of breaking it, as I'd hoped. It's a way of motivating myself to take better pictures, comment on more blogs, and explore CDP more often for even more blogs to enjoy. (I currently follow 38 on Bloglines.)

Sorry, long comment just to say that I think this is one of the most beautiful cats I've ever seen. I love the eyes. (And I'm not a cat person.) Happy Sunday!