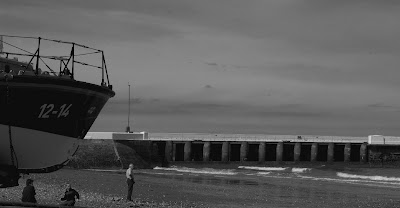 As yesterday's skywatch post was so colourful I thought a little monochrome was needed to redress the balance a little. It was beginning to be a bit too dazzling on the eyes so I went for this one from Ramsey Lifeboat Day, last Saturday. It even has some elusive locals. Of course it rained so I had alternative plans and arrived when everyone had gone, but the lifeboat was still there.

The Royal National Lifeboat Institution (RNLI) is a charity that saves lives at sea around the coasts of Great Britain and Ireland, as well as inshore. It was founded on 4 March 1824 as the National Institution for the Preservation of Life from Shipwreck, adopting the present name in 1854.

The RNLI operates over 230 lifeboat stations around the coasts of the United Kingdom and Republic of Ireland. Since 1980, lifeboat rescues have doubled; the RNLI rescues an average of 22 people each day.

The charity also employs lifeguards on beaches in the southwest, south Wales and Norfolk. In 2008, this service will be expanded to cover over 100 beaches. [1]

The RNLI is funded entirely by voluntary donations and legacies (together with tax reclaims), and has an annual budget of £130 million.

Sir William Hillary came to live on the Isle of Man in 1808. Being aware of the treacherous nature of the Irish Sea, with many ships being wrecked around the Manx coast, he drew up plans for a national lifeboat service manned by trained crews. Initially he received little response from the Admiralty but on appealing to the more philanthropic members of London society, the plans were adopted and the National Institution for the Preservation of Life from Shipwreck was founded in 1824. Thirty years later the title changed to the Royal National Lifeboat Institution and the first of the new lifeboats to be built was stationed at Douglas in recognition of the work of Sir William.

At the age of 60 Sir William took part in the rescue, in 1830, of the packet St George, which had foundered on Conister Rock at the entrance to Douglas harbour. He commanded the lifeboat and was washed overboard with others of the lifeboat crew, yet finally everyone aboard the St George was rescued with no loss of life.

As you can appreciate The RNLI is godsend to those in peril upon the sea. Manned by volunteers around the Isle Of Man and Great Britain the brave men and woman who give up there free time to train and save lives lives, and sometimes sacrifice their own are a wonderful testament to the better side of the human race. This island of sea lovers alone owes a lot to this institution. In fact one of our bloggers is a volunteer and you can have a better insight into the RNLI through words and images at their website MANNANANS CLOAK
Posted by Jane Hards Photography at Saturday, July 12, 2008

Hauntingly wondrous! I love this so much... B&W is my favorite.

Hehe, is all that colour too heady for you? Clearly used to grey skies :) I like the mood of the photo. It speaks volumes about the dark storms that these brave volunteers go through to rescue others. I had to smile about the name change though, RNLI is certainly an improvement on National Institution for the Preservation of Life from Shipwreck, by the time they said it the sailors would have drowned! In those days they were clearly not so big on acronyms, I just noticed if it was reduced to one it might have been NIPOLS!! hehe.

this photo is gorgeous. the black and white makes it so moody. :)

Great shot.. I love the write up too.

Thank you for all your kind posts

I think you have inadvertantly entered this weeks Saturday Photo Hunters - yours is a perfect photo & post for the word SUPPORT!

Have a good w/e - hope the suns finally shining!

Very nice writing about the history here. Thanks for sharing.

The Ramesy Sunset colors are so intensive and very pretty too.

I am involved in a black and white photo project over at dot's. Really enjoying it! Lifeboat, excellent choice! Ours have been very bisy, lots of people out near Whitby getting stranded, fishermen too.

I didn't realise until I read this article and looked it up that a "packet" was a king of ship. Now I understand the "Steam Packet Company". Thank you Babooshka. A lovely picture as always. Also, I see you passed 10,000 yesterday - well done.

Hear, hear, to the lifeboat people. As a child, I remember my grandfather swimming out too far off the coast of Atlantic City, New Jersey. My mother called the lifeguards, and I still remember their pushing the boat out, leaping in, and then the ride to the hospital with my mother and him...he was okay!

*Still* getting back to normal and catching up after the computer problems. Thankfully haven't lost any of my old photos either :)

I'll be back soon, but just dashing from blog to blog at the moment.

Thank you for providing me a nice explanation about RNLI. Nice photo!

Thanks for your visit to my SkyWatch Friday post, Babooshka.

I'm on the road and in the field doing another photo trip chasing the bloom of our Rosebay Rhododendron (white blossoms) in the northern area of the Southern Appalachian mountains, and with lodging that does not have the most reliable internet service. I won't be home again for a few more days yet, but I did finally develop and upload a few images to update my July 7 Rhododendron post.

Sunrise this morning was a washout, literally, with locally heavy thunderstorms--looks like the rain won't ease up until later morning so I'm going to breakfast soon. But I wanted to try and get around to all who visited my SWF, and others too while I still have good internet access. So, please forgive this cut & paste with a small bit of personalization added--I do appreciate your visit and your comments.

You have some absolutely stunning photos that you posted on your SWF! Just a beautiful capture of the colorful reflection. I sure could have used something similar this morning!

It's interesting though that you follow up that great SWF with a black and white. I guess that puts it all into perspective. Tonality and color both make great photography.

Babooshka. Yet another fantastic photo. The old tub looks great in black and white. For the record she is a Mersey class named Ann & James Ritchie after the very kind people who funded her. She has recently arrived back in Ramsey after having a major refit during which time we had a relief boat on station. All this and more can of course be read on my site. Thank you for linking to it

an average of 22 people are day are rescued?!? sounds like a lot of people are putting themselves at risk - don't they read the weather reports?

A great tribute Babooshka - keeps the cause going because they don't get enough recognition.
I'm glad you covered it too.

I like the people in your photo to compare scale with the boat. Gray seas, grayscale photo, great connection, and thanks for the background on the RNLI

Its a great black and white photo. Lovely quality too it. Thanks for the info about the RNLI, I didn't know half of that.

Loved the detail about the RNLI! The photo is great! The man standing down the beach a little looks dwarfed by the boat in the foreground! Neat!

Hey really nice website, I noticed your website when doing study on some methods to develop my web log. I was simply inquiring which spam software system you use for comments as I get tons on my site.
I never comment on blogs, but this one is awesome! Thanks.

It's a blog not a website run my Blogger, so all spam software moderating comments is taken care of them until you decide if you want to publish them or not. Thank you for your awesome comment. Maybe you could point me in the direction of yours,that is if I unaware of it?