RAMSEY ROCKS OUT ON JULY 4TH 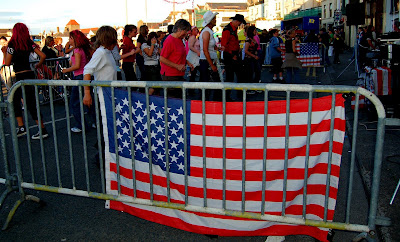 As Ramsey Week officially starts later today, I thought I'd kick things off with an archive Ramsey Rocks Pic. When I upload this post it will still be July 4th across the pond so I thought this one would go nicely with something Manx/American I have recently discovered. Not a phrase I ever thought I'd be writing on this blog!

NAMA, I mentioned in a previous post, is the North American Manx Association. Here's a little about them.

The North American Manx Association (NAMA) is a non-profit, ethnic and cultural heritage institution founded in 1928, as a successor organization to Mona's Relief Society of Cleveland, Ohio. NAMA is a group of Americans and Canadians dedicated to the preservation and appreciation of the Manx culture. Most of NAMA's 850 active members are second and third-generation North American. In the U.S., there are chapters in Chicago, Illinois; Cleveland, Ohio; Rocky Mountain; Galva, Illinois; the Greater Washington, D.C. area; Minnesota; Nebraska; Northern California; Utah, San Diego, California; and Wisconsin.

In Canada, you will find Manx groups in Ontario; and in Vancouver, British Columbia. NAMA is interested in helping Manx in all areas get in touch with local chapters or assisting those who want to start new chapters.

NAMA publishes the quarterly NAMA Bulletin, sent to each of its enrolled members.

For those interested in their Manx forebears, NAMA has Calvin Quayle as a resident genealogist. He serves as an archivist and information-dispenser. Please contact him to find out how to submit your research findings so we can build a greater Manx family tree. Please do not contact him to do genealogical research for there are just too many of us. But he will point you in the right direction.

For more Manx genealogy, there is the Isle of Man Family History Society (IOMFHS)

Will have to check this one out in depth. Could prove to be very interesting for this parochial little blog. Any members out there, your're more than welcome to stop by and educate me.

Gary and I were due to go for a drinkies tonight, but never got there. Good job as I noticed the sky was awesome, so I dragged him (not litereally caveman style, but figurativley you understand) over the nature reserve at 10pm. Quite what the neighbours thought when I was breaking world sprint records before the light went altogether in my scruffs I don't know. I snapped until the battery went, but got loads for next weeks skywatch. We don't get skies like this often so hey , a photographer's gotta do what photographer's gotta do and a cartoonist has to accompany her, even though it set his hayfever off. Thank you Gary for indulging me, yet again.
Posted by Jane Hards Photography at Saturday, July 05, 2008

NIIICE photo & thank you for posting it - I had never heard of NAMA, and I'm still not sure as to their purpose or Manx either, but I'm going to google it and see what I can find out.

BTW, thank you so much for your comment on my Sky Watch Friday post, it's much appreciated.

amazing that you have people in another country willing to carry on the traditions of a small island!
this has motivated me to find out more about manx culture - will start by looking up wikipedia

Thanks for posting the flag photo. I appreciate the gesture of friendship in your doing so! :-)

Lookin forward to your sky photos - last night was awesome here in Blackpool too...camera was snappin away.

Nice gesture to post that picture for those of us on the other side of the Atlantic. Your Gary sounds a little bit like "he who does not blog" with Jules in PNG:)

Interesting info about the Manx Association; the internet certainly makes it easier for smaller organizations in a large geographic area.

Certainly made me smile to see Old Glory on your blog today! THANKS! The explanation for the post is fascinating. I, too, will dig deeper but also look forward to learning more from you. Your tease about SWF makes Friday seem far far away, but I'll be there Thursday night to check it out! Please thank Gary for indulging you and us!

Nice post today. I look forward to next weeks sky watch pic. The things we do to get that shot.

This should be interesting concert, and Old Glory become point of my view in this post. Cool shot.

Well do I understand the drive to forego social fun for work activities. Sadly, many people seem to think making photos is quick and easy and rarely comprehend the intensity of effort involved much of the time. Looking forward to seeing your results!

Background history is always interesting. It is never to late to learn something new.

Drop by when you have time - I have something for you...

So cool, I love the photo and information.
mary

Love the photo! They look like they are line dancing. And the mud-eating duck is so fine.

Fascinating! Who would have thought!