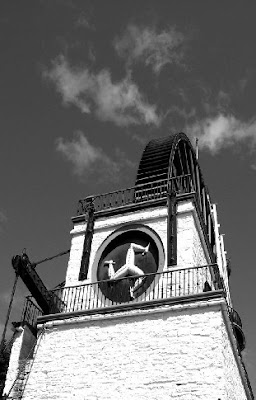 Well we've had Canada Day and American Independence Day, well make way for the big one(heavy dose of irony) put your hands together for July 7th, Tynwald Day, the Isle of Man's very own National day. It's actually July 5th, but we are celebrating on the 7th as the 5th fell on a saturday. It's still Ramsey week, but no activities today in Ramsey and the shops closed. The Triskelion, the odd shot above, I'll get to later.

Tynwald Fair Day, held annually on old midsummer's day in July is the Isle of Man's national day and is the occasion of the Tynwald Midsummer Court. The Members of Tynwald - the Manx parliament - meet at St John's village in the west of the Island for the ceremony, a legal requirement established by the Island's ninth century rulers.

The name comes from Thing-Vollr, the Norse for parliament field. Tynwald Court, together with the Island's senior public officer-holders, assembles on Tynwald Hill - a four tiered hill in the centre of St John's, reputed to be constructed from sods of earth from every parish. The open air sitting at Tynwald Hill dates back more than 1,000 years. During the ceremony, the Deemsters (the Isle of Man's High Court judges) promulgate Acts of Tynwald by proclaiming to the people in English and Manx Gaelic the titles of new laws which have been passed during the year. It is also an opportunity for Island residents to exercise their ancient right to present a petition for redress of grievance at the foot of Tynwald Hill, and for the swearing-in of the Island's four Coroners.

The Triskelion, the 3 Legs of Man symbol displayed in the photo is the national image of the island and is actually the wrong way round on the Laxey Wheel. They forgot to reverse the image when it was transfered and so remains the opposite to it should be. Incidently you may have seen the 3 legs symbol on another islands flag, that of Sicily. There are many theories about how and why the Triskelion is on the National flag, but again it seems a lot of people believe it was introduced by our friends the Vikings. Wil have to have a dedicated post to Triskelion theories.

I have recently received a few blog awards. As they are pay it forward kind of rewards, I will this week be displaying them and passing on to some deserving blogs who I'd like to highlight that may slip under the radar, but I am an ardent fan of.
Want to join Odd Shots Monday?

What a great ODD SHOT....Thanks for the story, you know something I've visited this great place on many an occasion and never noticed that the legs were the wrong way round...Also what I find odd is that even though the Manx National day is July 5th if this falls on a weekend as this year they hold the festivities over until the Monday. I think that they should keep it all on the fifth like the Americans keep everything on the 4th.

This is truly an odd shot, and I enjoyed reading the text along with it. Thank goodness those are legs and feet because that's all I could think of that they could be.

Interesting. They have the same symbol in Sicily - the trinacria but it has a head in the middle.

It is a very interesting symbol. Of course having the celebration on the Monday gives you a work day holiday.

Thanks for the info: I enjoyed readingit.

Having a holiday on the Monday devalues the day itself and turns it just into a lazy long weekend.

As "Louis" wrote previously, he's buried up past his cowbell in a work project for several weeks, so he won't stay long enough to comment very often until he has more time, even though he stops by daily. "Louis" thanks you for your continued visits and comments!

This looks similar to the Mercedes Benz emblem as well, though without the feet.

Excellent shot of the wheel.

Oh, & happy Tynwald Day!
Hope the weathers better with you than it is here, for the ceremony on the hill.

entre b&w et sépia, cela rend très bien. je ne connais pas la marque, mais j'aime bien cette enseigne.
between b & w and sepia, it makes it very well. I do not know the brand, but I like this sign.

And another day of rain!
We know how to celebrate!
Will raise a glass on this special day!

Ah, so Tynwald day it is. I was just wondering what would be the purpose of this rainy Monday... ;)

Happy Trynwald Day, and thanks for the interesting post!

Ah - so Tynwald Day is today, so that isn't after all the reason why the triskalion was on Saturday. So what was that about then?

Ah - so Tynwald Day is today, so that isn't after all the reason why the triskalion was flying over Barrow Town Hall on Saturday. So what was that about then?

Isle of Man National Day? LOL! Seriously, happy Trynwald day but I find this hard to believe. Good job you said that there was a large dollop of irony here.
Ciao

If I'm allowed to say this ... lets hope Isle of Man haves more days so we can see such great black and white photos and read interesting posts.

I'll be waiting for your blos that slip under the radar :)

Thanks for visiting - I'm late as my brain is suffering from an extra hour sleep - I actually got over seven hours. It must be true that you need less sleep as you age.
Love the mono'.

The Triskelion certainly looks odd enough to count, and your photo is excellent. Have a good day.

I'm back. I meant to say that so much is made of the 'Mother of Parliaments' and of another countries so called Democrasy - but the Norse did it first.

Noce post! Sorry it took me so long to get back to you. I have had a crazy weekend. I really apreciate you support and readership of my place.

I was not particular about the way the legs should face but thanks for pointing that out! The triskelion is quite popular in the Philippines but has to do with fraternities, and not the beneficial ones =) More of the hooligan types actually but are less honorable lol...I mean really the members would gang up an enemy member and like that just because they like to. Have a happy week ahead!

Great post... interesting. My 2 yo nephew would call that your town logo... and I would agree ;-)

Several ways odd. The angle, and the reversal of the symbol for example.

Cool Odd Shot. I've always wondered about the three legs and now I know! Hope you can keep up with the excitment of Tynwald Day!

Once again I have learned something new - I even got an answer to the question on how the Tynwald functions today.

I don't know anything about the Triskelion, but there where certainly connections between the rulers of Normandy and Sicily at that time. I'll look forward to your post on that theme!

From Wikipedia:
The name Tynwald, like the Icelandic Þingvellir, is derived from the Old Norse word Þingvǫll meaning the meeting place of the assembly, the field of the thing.
The Wald where decisions where made. In Norway today "Stortinget" and the day of our constitution Mat 17th
Great to learn more

I'm glad that I don't have three leg! I lose enough socks in the dryer as it i!

Somehow I believe the tale about every parish contributing earth. Sounds like what I want to believe about people more than 1,ooo years ago. ;-)

The island hs been on the news again today about the dig. Any updates?

such a great shot... love the angle and the stories are Always a pleasure! thanks for sharing :)

Three legs, yes, I see. but my first impression was a person, running.

I'm not sure if you noticed but I featured you on my blog!