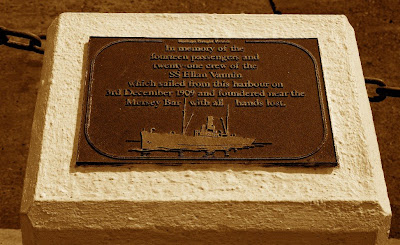 I have lost internet connection on my laptop. Had to wait to borrow Gary's. His BBC Political cartoons come first apparently. Who do the BBC think the are. Total disaster tonight. Above is a plaque along the harbour dedicated to the loss of the SS Ellan Vannin and 35 lives. Gone for sepia again, just to set the tone.

In the terrific hurricane that prevailed on Friday morning, Dec. 3rd, 1909, the s.s. Ellen Vannin of the Isle of Man Steam Packet Company's fleet, went down with all hands, in some thirty feet of water (at low water), about a mile or more on the Liverpool side of the Mersey Bar.

At about twelve minutes past one o'clock on Friday morning, the steamer left Ramsey Harbour bound for Liverpool, carrying passengers, mails, and cargo. At the time of departure there was blowing a strong breeze, from north-west, but there was nothing in the weather to delay the sailing of the steamer. But about an hour and a half after the Ellan Vannin had proceeded on Lee voyage, the wind very suddenly increased to almost tornado force, the gusts being the most severe that have been experienced for several years past. With the rising of the wind the sea ran in fearful fashion, but as it was aft of the Ellan Vannin no anxiety was felt at the headquarters of the company, the vessel having on many occasions come safely through ordeals quite as bad, if not worse. When, however, telegrams arrived late on in the day announcing that the Ellen Vannin had not reached her port of destination, considerable anxiety was expressed, though the officials at Douglas hoped that nothing worse had happened the steamer than a compulsory run for shelter. There was a constant inter-change of wires between Douglas and Liverpool, and by five o'clock in the after-noon it was recognised that a serious situation had arisen. Mr W. M. Corkill, the manager of the company, summoned the directors to a meeting, and further efforts were made to elucidate the mystery attendant upon the non-arrival of the vessel in Liverpool. At about seven o'clock a telegram was received at the office which caused a feeling of consternation. It was to the effect that during the day the crew of the Formby Lightship had seen floating in the Mersey channel lifebuoys inscribed " Ellan Vannin," several dead sheep, and a quantity of turnips. A portion of the cargo of the steamer consisted of live sheep and turnips, and the flotsam in question gave rise to the fear that the steamer had foundered. More disquieting still was the picking up by the lightship crew of a mail basket, which was sent to the Birkenhead Post Office, and, on being opened; was found to contain letters despatched from Ramsey. The news quickly leaked out, and was spread by word of mouth and telephone all over the Island, the result being general consternation and mourning. Among those whose friends and relatives were on board the fated vessel, hope, died hard. Wreckage of all kinds was being washed ashore during Friday evening and Saturday morning, but they still clung to the possibility of the vessel being afloat somewhere in a derelict condition. The steamer carried no deck cargo, so that the wreckage that was seen floating in the Mersey was dislodged from the holds and saloon of the vessel; but there were those who still refused to believe that the worst had happened, and it was not until Saturday afternoon that all hope was abandoned. Then the Mersey Docks Board's boats brought tidings of having located the wrecked vessel in the position above-mentioned.

The Ellan Vannin, it would seem, rode into the Mersey Channel before an 80-mile gale, She probably passed the Bar Lightship in safety at about 7 o'clock, and entered the "gut," as this part of the channel is called. Here an outgoing tide of five-mile-an-hour was met with. It would come harder through the narrow gut than anywhere; it would here meet the seas that the gale was driving along— a five-mile-an-hour tide fighting against an eighty-mile-an-hour wind. The waters would seethe and bubble, and the poor Ellan Vannin would drive right into the thick of it. It is quite useless to speculate as to the cause of the foundering of the vessel ; but the fact remains that it is one of the worst disasters our annals bear record of.

Wanted to to more on this but unable to at the moment. Ramsey Week is also proving to be a washout for most outdoor events. We better have Ramsey Rocks or I won't be a happy bunny. I am not a happyish bunny as it is. By the way, Ellan Vannin is the Manx name for the Isle of Man. I'll tell you all about the poem, anthem and the Bee Gees when there is no G8 summit meeting on that Gary simply has to draw for the BBC. This is going to be a very hard hitting image, you read it here first. Now can I have my internet conncetion back on my laptop so I can do the posts I want to when i want to. Argggggggggh!

fascinating story - and a great picture. good choice of sepia...

That's an interesting story. Disasters at sea are terrible, but we eventually learn something from them.

while your neck of the woods is a washout, ours here is a burnout - it's sweltering hot every day...

Thank you Babooshka for another lovely post, and for enlightening us on the history of your Island.
I hope you have managed to rescue the photos from your dick PC and that you get your internet connection back soon.

I really enjoyed this... anything like this is a great read.. I don't mean that in a morbid way more the history of events, how there coped as so forth. Not been around much this week.. which I have to say sorry for, a mixture of mental tireness and being busy here at the moment.

you make history readable! thank you!

I think it's good to be slightly offline for a while... once in a while...

Very sad put part of our history. I hope you get your connection back
soon. That's the island for you though. Looking forward to Ramsey Rocks photos, hopefully.

well, i must say, you managed a fasciating post in your short allotted time! I saw the village idiots from SA and USA sitting together at the G8 on the news last night.... look forward to Gary's take on it!

Posting from a city younger than I, it is always a great pleasure to read your captivating historical perspectives on Ramsey, Baboohska! Thanks for hanging in there with your laptop and internet problems. And thanks to Gary for sharing! Many of us would feel cut off if we didn't get our Daily Dose of Ramsey!

Sad tale...A number of years back I read the story of the Medusa, the French ship that sank off the coast of Africa, whose raft of survivors inspired Gericault's famous painting. If you haven't read it, you should; that's one heck of a story!

Thanks for making the effort and getting a post done for today! Thanks Gary, for loaning your computer. ;-) The sepia tone not only sets the tone for the image today, but also for the story. Thanks for sharing it with us...

Such a sad story and the sepia really sets the tone..

Thanks to Gary for helping out...

(thanks for your visit and nice comment! Unfortunatelly lately I am having so much work I cannot post as I would like, nor visit my CDPB Friends!!!)

You said about the internet going down on 365to42, and I've had the same problem with my laptop!

But seriously, who do the Beeb think they are? Putting Gary's political cartoons before you and your brilliant blog? It's an atrocity! Lol...
Ciao love

I like it in sepia...adds a historical feeling to it.

Interesting piece of history. Thank you.

BBC, eh? I used to listen to th eBBC on shortwave radio, not sure they broadcast to the Americas anymore as I can not locate the station.

I like learning about your part of the world...and the internet lack is soooo frustrating isn't it??

Thanks for the story. I've heard the song many a time and even sang along to it when I've had one too many. But I have a question for you. Been in Ramsey seven years now and never seen this plaque, where abouts is it?....Not too wet a day today. Hope it keeps dry for Saturday and Ramsey Rocks. Really looking forward to it.

I'd never heard about this tragedy. Sad. Being Cornish I fully understand the power of the sea but it's Stories like this and also tragedies like the Penlee Lifeboat that really illustrate that power.
Oh and tell Gary that he should let you on his PC while yours is out of action. Or else! :D

I'm loving to learn some of the History of Isle of Man through your eyes and words.

It's on the corner of the harbour opposite the Ellan Vannin Pub. Ramsey Rocks Saturday and Party in the Park Sunday! Can't wait.

I'd heard of this tragedy, but not the details. I've also heard the song. I love the way you've presented the memorial.

That's a very moving story, and fitting photo as a tribute to those who died.

I also love the sunsets!

Just noticed your "Bee Gees" link on the sidebar and clicked out of curiosity. What an adventure that led to! More about Ellan Vannin and my first time to hear two favorite groups (Bee Gees and Spinners) sing about her. There's no end to what we can learn here! :-)

Nice story, although a bit sad.