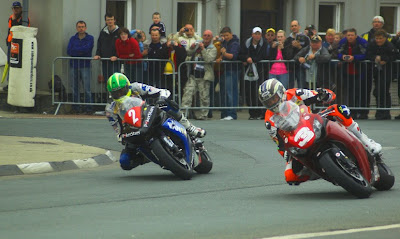 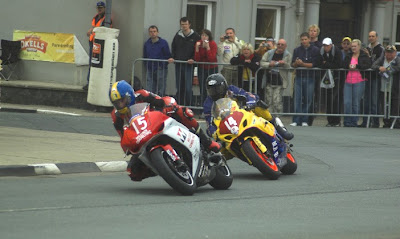 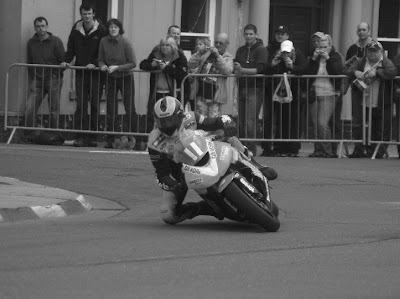 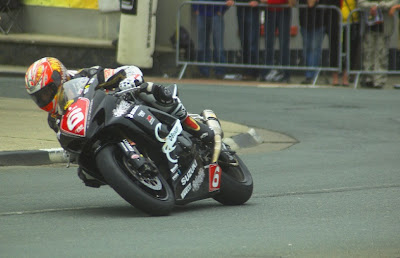 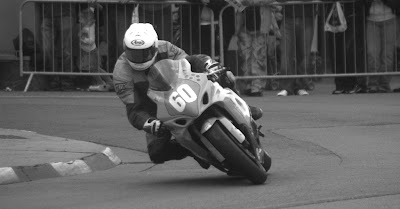 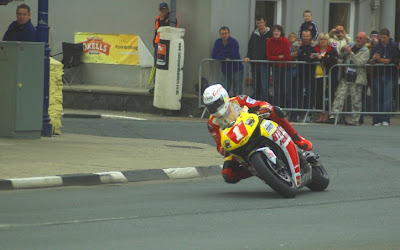 Here are a bunch of images from Monday 02 June 2008 Superstock race. Again in no particular order. Put it this way, I've 175 to sort out so it's going to be a long "day for night." Only two deleted but those 175 left are all on the money. That's only one race too. Haven't even contemplated looking at the afternoon race!

The Winner was No. 6, Cameron Donald. Second place went to No. 3, John McGuinness. Third position was No. 1, Guy Martin. Those three lads are amongst the pics. I was one of the few fortunate ones who actually got McGuinness waving, which was a real crowd pleaser. We didn't get any wheelies today, but maybe later in the week.

A big thanks to the guys down the back alley of Taubman Street( where they were taken) for making a little space for a slight female and her camera. Hustling for position is never pretty, we all want a bite at the photo cherry, and they allowed me space to have mine. I hope you all got the goods too lads.

The T. Shirt now seems to have it's own fanclub and is a life force beyond my control. Being asked if you can have your T.Shirt photographed is well, surreal. Being called Babooshka in the middle of my local high street even more so,especially as the name does not appear on the shirt.

Well, eats shoots and leaves post again. I am going to be a bad blogger this week, but I will be "calling at a blog near you" soon as I can. I will leave you with some stats of todays race.

Amazing shots - especially the one gentleman whose knee seems to be touching the road.

I would so like to be there watching and taking pictures. Pretty neat that people knew who you were. Keepem coming.

Awesome pics and great post!! I'm there watching it with you, lol - through your lens. Thank you for being such an awesome photojournalist!

Those speeds leave NO margin for error! I'd love to be there, though I fear that metal barricade provides an insignificant protection should one of those bikes lose it in the corner. Yikes!

Great work. Hope it's profitable for you in the days to come.

I am sorry that I am not there to see if I can spot you, but well done on being called Babooshka in your high street. Lovely photos again, of course.

Great shots - I prefer my outrigger though. Speed is not my thing!!!

Great photos, I'm dead envious wish i could have been there

Just added you to my "highly recommended sites" list, being meaning to do it for ages

Seeing your photos is so much more fun than reading about it all in the on-line press. It gives me a much more "immediate" feeling, in spite of the fact of being a day late!
When are the sidecar races? I love them!

I have a relative who had a bike like these and he raced it and wrecked it with him on and off of it, more than once and then he quit. His family finally came first he said.

I saw some fantastic photos he took of his bike with him racing on it and wow I was impressed. Like your photos. You got to be there to appreciate the action.

I love your photos of motorcycles, this should not be easy to take. you have never had wanted to make a filet effect?

Excellent in-motion shots. That s something I am lacking in my photo skills. Now you're a local celebrity, that is quite fun.

Brilliant, just brilliant. You must be so pleased with these. When will you get around to uploading the others? Again brilliant.

Fantastic pictures, and how fantastic that your fame has gone before you! I agree, I think we need a picture of the T-shirt for all your fans who can't see it in person!

Wow. That's for the riders AND for you!

I've done some riding (never racing) and can't imagine being able to wave in that position!

Keep having fun and thanks for sharing with us!

Supercool! The Courier should print these. AWESOME. Can't wait to see more.

I just found you at imagekind.

Cool shots! I like the way you've really captured the speed of the scene! Look forward to more :)

You know, I've always wanted to do this; guess it'll have to wait until my next life. It looks like so much fun...

Fantastic photos, those speeds are just mindboggling. i get scared whizzing around on the scooter here. shameful hey :)

Spectacular action shots! You picked a great corner to shoot. Hope you get a shot of you in your custom Tee... would love to see it :-)

Great shots. It is amazing how they can keep their speed around corners.

These kind of bikes scare me. I know they are fun but they are so dangerous. I guess with age comes more common sense. LOL

Great action shots. I had heard of the Isle of Man bike races; and did a little research on the TT. I discovered that Cameron Donald, the winner of today's race, was born in Australia.

Speed in kilometers seems bigger than in miles .
Nice shots.