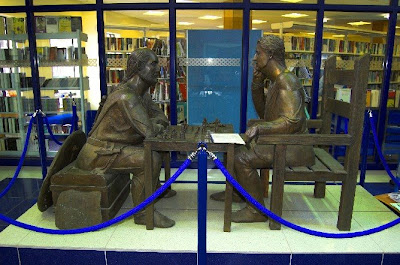 The founder of the last dynasty to rule Man and the Isles was Godred Crovan, a son of Harold the Black of 'Ysland' (i.e. Iceland). His origin is obscure, although various conjectures have been made to trace his genealogy. It is, however, certain that he was not a mere adventurer. He derived a considerable amount of support from the Hebrides and he was successful in establishing a dynasty that lasted for two centuries and was never seriously challenged. These circumstances argue that he was in some way related to some of the previous Kings of the Isles. "He first came to notice in 1066, when we find him in conjunction with Godred, son of Sigtrygg, king of man and the Isles at the time, assisting King Harold Hardrada of Norway and Tostig Godwinson, in their invasion of England. The invaders were routed by Harold Godwinson, King of England and a brother of Tostig at the Battle of Stamford Bridge. King Harold of Norway and Tostig were slain. The two Godreds managed to escape to the Isle of Man. King Godred Sigtryggson of Man and the Isles died shortly afterwards and was succeeded by his son Fingal. Godred Crovan seems to to have returned to Iceland, but in 1071 he is in Norway, busily collecting an army to invade the Isle of Man. He received strong naval support from the Hebrides, but for some reason, he met with stubborn opposition in Man. Despite two setbacks, he finally triumphed in battle at Scaefell(Skyhill) Ramsey. So grateful was he to his Hebridean supporters that he gave them a choice of taking possession of the island or plundering it. Eventually the Hebrideans received the South part of the island in close proximity to his own residence; the people of Man were driven into the Northern portion. All accounts agree that Godred Crovan was a powerful ruler: he conquered Dublin and a large part of Leinster: he forbade the Scots on the western seaboard of Scotland to build any vessel requiring more than three bolts in its construction. He was married and left issue, three sons, Lagman, Harold and Olaf. He died of pestilence in Islay in 1087.

Olaf, who succeeded Lagman, was a minor, when King Magnus Barefoot raided Man and the Hebrides. He is variously known as Olaf Klining or Bitling from his small stature or florid complexion. He reigned for some 50 years and brought a long period of peace to the Isles by keeping on good terms with the Kings of Norway, Scotland, England and Ireland. He married Ingibiorg, daughter of Earl Hakon of Orkney by whom he had one son, Godred the Black. Some chroniclers also state that he married Elfrica, daughter of Fergus, Lord of Galloway. He had several illegitimate sons and many daughters, one of whom, Ragnhildis (Raghnaid), married Somerled MacGhillebrighde, regulus of Argyle and progenitor of the great Clan Donald, later to be Lords of the Isles. "Olaf Bitling sailed to Norway at the end of his reign to pay his 'scat' of 10 marks of gold to his superior. In consequence, he was ceremoniously crowned at Trondheim and left his son Godred to be educated in Norway. On his return to Man, he found that the sons of his deceased brother Harold were conspiring to overthrow him. On the Feast of St. Peter and St. Paul, 1153, Olaf arranged a meeting with the conspirators to consider their claims. Unfortunately Reginald, son of Harold, took advantage of the opportunity to dispatch his uncle with an axe an he was slain in Ramsey.

Godred Croven then established the Kingdom of Mann and the Isles after the Battle of Skyhill, Ramsey on his third attempt. Again trying to sift through entries and info concerning anything to do with the events and timelines can be a nightmare, but the above married times, dates, places and names most frequently. It's also the best evidence of Ramsey connections, rather than just generic Isle Of Man.

The photo depicts a sculpture by Amanda Barton of Godred Craven and his son Olaf1 playing what is supposed to be an innocent game of chess. Apparently not! Olaf is said to be playing classical chess and Godred playing "merels" a far more aggresive game. An analogy for the old
and new powers and times to come and changing landscape. Thanks again to Ramsey Library for permitting me to take photos and the use of older local books.
Posted by Jane Hards Photography at Thursday, June 26, 2008

Babooshka, just to let you know I'm still visiting as time permits. Blog visiting and commenting is fun, but very time consuming. I'll be by from time to time. Wish visits were all I had to do.

the statue is beautiful (but this bizarre piece of paper (it seems) on the table games), now I'll take my time to try to bring all your post.

So interesting... I know I've said that every day of this week but hey, it really is TRUE!!
Ciao

Thanks for report and photo. I know small of Isle of Man. The statute is nice big.

I think that they would both rather be playing twister or a rouing game of go fish!

I have a bit of time on my hands 'til next dig. The statue is well statuesque. All good hun. Bring on those Celts for me hen!

The statue is magnificent and the History lessons keep on great shape!

Great shot of this statue! I like the interpretation/symbolism of their game. I am enjoying your scholarly reports! This one was really interesting reading!

As before interesting history with the photograph of the work of art.

Great post. Since my recent visit to Orkney I have become fascinated with the history of the vikings and celts.

Babooshka, Having this series and getting photos that are so much related to your series is very very much a great job! I really commend you for this! I love the photo! Is it Life size? I guess it is!

Mabuhay from the Philippines!

A very interesting post. Thank you for your comments on my blog!

That must have been some job to research. You don't manage all that in an afternoon.

For a Norwegian it is once more interesting to see the close relationship that has existed between the Isle of Man and Norway of old. It is very strongly shown in the names of the various rulers.

Very much of this was news to me - the most surprising was that there ever was a king of Iceland before it came under the Norwegian Crown with king Haakon Haakonsson around 1264. The people of Iceland had fled Norway several hundred years before to escape the kingdom there, and they were in many ways governed by a combinations of clans and the church.

Hats off - once more!

Ramsgate is Norse too. It's history has always fascinated me and I see the common ground with your island.

Just to say enjoying the vikings. A photobook would be handy for the island.

All been said. Good work.

Activated an interest in my norwegian roots.

wow an amazing history of you part of the world! thanks for doing the research and taking the time to post this.

Those are some fantastic clouds!