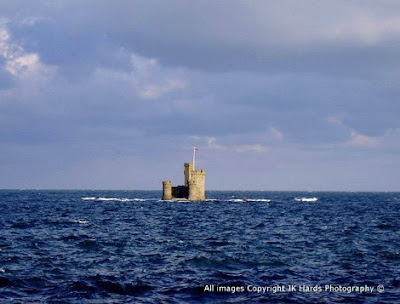 I will not have a cable for my laptop until next weekend, so in the meantime all images this week will be from older stock. You may notice my real name appears on them as these are my copyrighted images from my sales site. I will answer emails and comments as and when I can. Basically when I can get access via the and only internet cafe or my partners laptop, when it's free, which isn't that often.

This shot is odd because it's real, not an optical illusion or superimposed. The minature castle in the sea actually exists. It's in Douglas, Isle of Man, which is south of Ramsey, but shares the same postcode/zip code. A little more info.

Sir William Hillary moved to the Isle of Man in 1808 and found out for himself all about the dangerous waters of the Irish Sea which surround Douglas Bay. In 1824 he formulated the idea of a lifeboat service manned by a trained crew, to rescue those that were cast adrift. The idea was new and ambitious, but soon prompted the creation of the R.N.L.I the Royal National Lifeboat Institution we know today.

When Sir Hillary took part in a rescue for a Steam Packet vessel and cast overboard he realised the coast was too far to swim to. A place was therefore needed for sailors to wait for rescue. Soon after an idea Sir William Hillary had became a reality. The Tower Of Refuge took shape. Designed by John Welch the Tower was completed in 1832. Situated upon Conister Rock, or it's other name St Mary's Isle in Douglas Bay a haven in the form of a small castle sits. A place for sailors to take refuge. Built at a cost of £254 of which almost half was paid by Hillary himself and the other by subscription. The tower was kept well stocked with fresh water and bread, offering shelter from the weather and sea.

It's sill owned by the R.N.L.I and when a freakish low tide occurs you can walk to the refuge from Douglas Promenade. For those though in peril upon the sea, it remains a constant beacon, an oddity for the tourist and an emergency photo for the photographer with laptop woes. A safe haven indeed.

Katney's Kaboodle is the place to join Odd Shots Monday and see other wierd and wonderful shots from fellow bloggers.
Posted by Jane Hards Photography at Sunday, May 18, 2008

A very interesting story indeed. It must be a unique tower and extremely difficult to build. I hope it has saved many.

a bit like a fortified lighthouse - hope the 'puter woes get sorted soon.

That's a picture-postcard photo - brilliant! And the accompanying information makes it more interesting.
As a family, since living 12 years on our Irish island, we have a very soft spot for the RNLI (in fact our cat Rinli is called that because his purr sounded like the huge motors of the local lifeboat!)

Neat photo and even neater place--a cross between the Chateau d'If and Mont Saint-Michel, that you can also walk to in low tide.

Wow, what an amazing place (and thanks for the history, what a great story. The RNLI are a wonderful outfit). I didn't know about this tower, I'd like to get to the island to see it myself some day.

I love that shot! The story behind it is inspiring.

I know it well. I have walked to the refuge only once with my grandad. Happy days! So many super images you have photographed so expertly.

I remember this and I did look at it - when I could tear my eyes from the bikes on the prom.
I worked on a team on my second visit and apart from the inside of the garage and the course - saw everything in terms of the TT... such a lovely island. Yes, that always came through.

I love the name "Tower of Refuge": we need those all over the world for everyone in danger. It is a beautiful and innovative creation and I'm glad you posted it.

It's a beautiful tower but I'd rather keep my feet on dry ground!
MY ODD SHOT

Interesting post, and I like its name for tower of refuge. And story behind this tower is inspiring.

What an interesting shot ... it does look as if its sinking or rising out of the sea

Looks a bit like a piece of Mont Saint Michel in France broke off and was carried north by the tides across the English Channel...

Wow, that's amazing! Very informative post too, enjoyed it.
I've seen a lighthouse that sits in the water and during low tide you can walk to it. I think it was at Tybee Island, Ga.

Its one you see in the movies hehe. Great story behind an odd yet great photo! Have a nice week!

A very nice odd photo and interesting story, Thanks

Good luck with your computer troubles.

Wonderful shot and I was so curious I had to stop skimming over your blog and read about it...I like the birds below too...you take interesting photos...cheers.

Neat photo and interesting history!
Excellent choice for a (not so) Odd (after all)Shots Monday!

I'm rathering enjoying your computer woes, Babooshka! This is a fascinating story I never could have imagined. Thanks!

Have a great week!

What a wonderful place and story!

This is such a brilliant odd shot! I was signposted here by Katney who visited my ABC Wednesday post - please come over and have a look! I decided to do my post all about the RNLI. Your post is so relevant and gives more insight into the founder of the institution - I didn't know about this haven. It is magnificent.

A safe haven indeed and a wonderful odd shot.

Intersting story. It is amazing what can be done with vision and drive