ABC WEDNESDAY - S IS FOR SUNRISE ,SUNSET AND SARKOZY 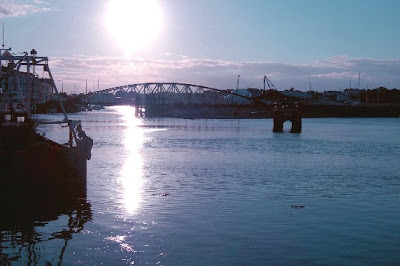 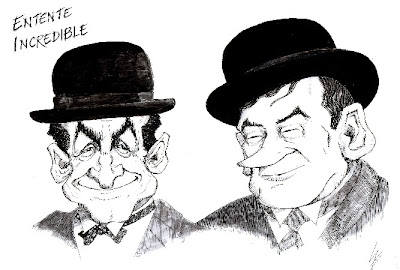 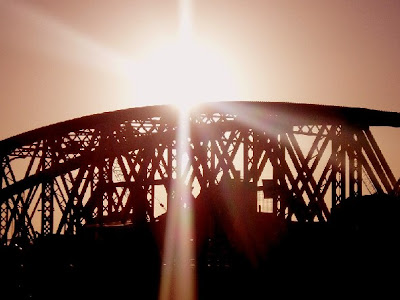 Well it was no stretch of the imagination to envisage this island dweller would have to show a sunset or a sunrise. One of each then. Wanted something else to go with them, not quite so obvious. That's why the cartoon is posted too.

Image one is the sunset shot. It' s taken from the spot that you can see in Tuesday's post, the real working side of Ramsey Harbour. This is the part of the docks where all the ships and boats were built such as the Euterpe, or as it's known to us Ramsey folk "The Star of India."

Image two is a caricature entitled "Entente Incredible". The two figures depicted as Laurel and Hardy are (on the right) the UK Prime Minister, Gordon Brown and (on the left) the President of France, Nicolas Sarkozy. That's the odd "S" for today. It's a cartoon by my partner. I dedicate it to Louis, the owner of the best bar in the world, (and the regulars)of the "Up & Down" in Montpellier, France. There is a beer mat behind the bar with a Sarkozy cartoon. My partner drew that too.

Image three is the sunrise shot. Taken from the walkway into town ,looking towards the working side of the harbour and through the bridge. I never tire of photographing the bridge as you've probably noticed!

Well not long now 'til the TT and to the arrival of a very important visitor to the Island, your ABC host Mrs Nesbitt. That makes you a visiting celebrity by the way, Mrs N.

Like to join ABC Wednesday? Please got to this link, MRS NESBITT'S PLACE
Mrs Nesbitt is the host for ABC Wednesday, where you can find details for joining, her own ABC shot to comment on and a list of fellow bloggers who are playing today, who would also appreciate your comments.
Posted by Jane Hards Photography at Tuesday, May 27, 2008

Don't blame you - that's a very photogenic bridge! Two lovely shots.
That cartoon is excellent. Your partner is very talented.

Do look after Denise for us all!

Wonderful s-shots! The last one have to be my favorite! It's fantastic! So is the cartoon!

Yes, you must look after Denise for us all and give her a BIG hug:)

The sun pictures are beautiful! The cartoon is funny! Altogether a fun ABC!

Love the cartoon! Great shots, as always! What a beautiful, sunny shot from the bridge! No wonder you love this bridge!

great shot of ur sunrise and sunset.

Mine in here Thanks

The cartoon is very good and I love both pictures.

hello Babooshka! You really made my day on your greeting! Especially when you said that you enjoy my photos, that was truly overwhelming! Thank you so much! You are one of the friends here in CDP that I really am proud of because you really visit a lot and comment most of the time!

Bye the way, your ABC Shot was great! Especially the sunset one, Gorgeous!

God BLess and Thanks so much!
Steven

Altogether an excellent post.
What are you going to do for 'T'- or can I guess...

This is a great post! Your cartoon made me laugh out loud. Pauvre Sarko! I like the photos of sunrise and sunset.

Hey, what happens when ABC Wednesday ends? Do you have to do it all over again or what? Just wondering because you're near the end of the alphabet now!
Ciao

That was a cool flare picture for sunset/sunrise. The flare in this case made the picture way more interesting.

Love your 's' shots--some French people I know would like the Sun to Set on Sarkozy!

these photos are so amazing! :)
I like them very much.
beautiful captured light rays on the last picture.

Smashing shots! I'm going to love getting to know the Isle of Man! And do say hi to Denise from me!

Never heard of Sargozy before so that is something new for me this Wednesday.

Fine photos! I also love that one from the Ramsey Harbour.

Nice caricatures, but I fell for the sunset and sunrise by the bridge(s?)

hi bab,
I really like the last one !
by the way, it spells SARKOZY and not SARGOSY which is nice, though ;-)

Great sunset and bridge ... and a very well catched caricature ... guess Gordon will be going with a Flash so Sarko will be alone!

Beautiful - both shots.
It`s the same bridge i guess?

Beautiful shots and what a talented partner you have!

Great 'S' post! I like the bridge sunrise and set, but I love the cartoon! It is really good.

Your better half should have a cartoon blog. I know he does them for papers etc and gets paid but he could show past drawings.

I think your partner has captured Sarko perfectly too!

I found you over here...lurched over from the other place...nice shots for this ABC thing...I will have to look into it...I think I like the second photo also..cheers.

Good luck with hosting Mrs N!! (From one who knows!) You'll have a fun time.

A great S choice!Love the sunrise and set! I hope you all are able to stop and say hi to each other while Denise is visiting! Sounds like fun!
My S is here
And here

These are great! What a fun yet eclectic group of pictures!