CAN YOU SPOT THE BIKERS WAVING AT BABOOSHKA? 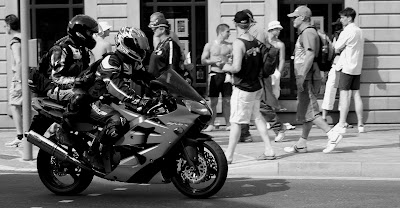 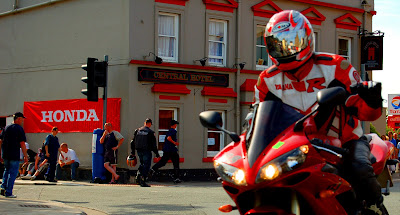 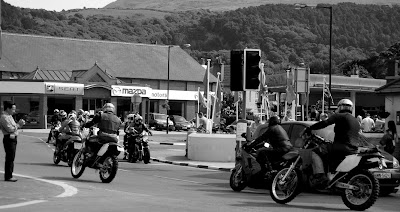 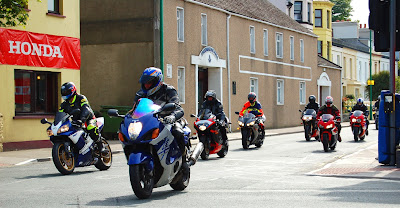 Here they are then the TT tourists! These images portray a tiny fraction of the thousands of people that are setting foot on the island as I type. It's been building slowly, but this first friday always see the great swelling of numbers.

The images are in no particular order, just a mix to give you a flavour of my town around 6pm friday evening. I took them from 3 different sides of the crossroads at Parliament Square. You can see glimpses of the Swan and Central pubs, the Town Hall and Library and Ray Motors Garage. Compact is a word that comes to mind. For UK readers if I said Ramsey reminds me of Trumpton, they would understand the sentiment. Trumpton was a 70's kids tv show, a tiny town which had all facilities more or less within inches of each other. Not aware of it having Pubs though! That's why I draw the comparision between the two.

This post is a bit of a hit and run. Didn't get to the laptop 'til late so a quick upload, grab a few, quick crop, desaturate and post. They're just to give you an idea what happens to a kind of "Smallsville" town during the biggest even of the year. So did you spot the two bikers (yes two, if you enlarge) waving at me and the Japanese tourist resetting his camera missing all the action. I hope it's gets the setting right before the races or he won't stand a chance.

Collecting the T.Shirt and will be wearing later today. I'll give you all a wave on the T.V if they fim my way
Posted by Jane Hards Photography at Saturday, May 31, 2008

What a fantastic series of photos!! I did see one waver and the guy with the camera, but couldn't find the other waver, lol! I noticed the Freemasons Hall ... funny, because I just noticed one in Kissimmee for the first time today and I've been here twelve years!!

The final cropped picture is great!! And the reflection in the helmet, very cool. Okay, I'm done now!! LOL

Great photos of the bikes taking over your town. I hope they're not too rowdy!! I think your t-shirt idea is wonderful and I can't wait to hear about people's reactions!

I caught the Japanese tourist. Looks like he might just be looking at the last photo to see if it was a good capture. I love the last panoramic -- lot of detail there.

Hey, these bikes are riding on the wrong side of the street ... the bikers must be waving a warning to you Babooshka :)

You've received a reward at One A Day - Mostly Seattle today. Pay me a visit to collect. If you want to pass the "5 blogs that make my day" along simply right-click the award and save it to your computer to use in your post when you're ready. No obligation to participate unless you are so inclined. Ciao, Chuck

oh these are great, you really capture the 'small town being invaded' feel. Hope you have fun photographing the event, and interracting with people who react to the T-shirt.... let us know how it works, I think it's a great idea

Well I wouldn't normally watch the TV coverage of the TT but now I'll probably try andwatch at least some in the hope of catching you in your T-shirt!

Fantastic pictures - I really must get to see the TT one year, having heard so much about it from mum and dad it is part of my heritage! I especially like the bottom cropped picture.

Thanks for your kind remarks on my blog Babooshka. I have considered millions of alternative careers, but funnily enough not photography. I think maybe my husband would like me to do that, I'm always stopping mid-walk to snap away so maybe it would be less annoying if I was making money from it! Maybe I'll consider it once I've also trained to be a landscape gardener, landscape artist, marathon runner (hahahahaha), rambling bookshop-owner, travel book writer, etc!

I only see one guy waving at you - second photo, second rider in blue shirt.

I love the third photo. The reflection on his helmet is amazing, as is the shot.

Ooooooooooooooooooooooooooooooh! Hold me down!
Will definately watch out for you.
Our ferry leaves at 2.15 from Heysham tomorrow....and I'll have a duck on my back! You know what the bike looks like and we both have matching bright blue lids (helmets)

Brilliant photographs, brilliant event. Have a good time and keeping posting the photos.

Yes, I saw them! I love the third photo - all that matching red and a visor reflection too. I tried very hard but I couldn't see a reflected Babooshka!

Cool photos! Closest thing we had here recently was a bike marathon, strictly fun, no race. I wonder when the Harley one is in the US...

Second photo, the guy in the blue waving.

Third photo, the reflection one, he's waving too.

Off soon to get the T.hirt and snap away.

Nice photographs. Love to see a large group of bikers enjoying the day.

It really has come to life for you hasn't it? I didn't quite grasp just how huge this thing was.

jajaja those photos of waves are so fun! I really like all the shots! Fantastic and full of action!

I'll be here being a member of CDPB for a month this coming 5th of june! While I'll be celebrating my 18th Birthday this 4th of June! I really want you babooshka and Marley of Cheltenham to know that here in this Daily Bloging world, you two are my best friends because you really come to my blog and comment most of the time. You just don't know how grateful I am whenever I see your names on my comment lists! I hope you guys feel my deep gratitude to both of you! I hope that you two will continue supporting my blog. If only I can find more friends like you, this CDP world will really be a great place!

Even if there would be just the two of you visitng it, I will still continue doing this with a smile in my heart!

Mabuhay from The philippines,
Steven Que

All of these shots tell me a story of TT, great job! And lookit the tourists! Have fun, looking forward to more cool photos.

Waving... the second guy in the second photo, though I think he's signaling a turn, lol... the third photo... that looks like a real wave.

Love the shots... reminds me of our Sturgis and brings back happy memories :-)

Found one waver, and one tourist, but not the second, so I am going back to look again! This is an exciting series! I love the shots of the downtown in the background!

I used to love to look at bikes and to hear them and to see the people riding them. And your photographs are a reminder of those days. I have not seen anything like this in about 4 decades or longer. In those days, I think gasoline was about 26 cents a gallon. LOL

Wouldn't expect so many motorcycles on your island...what's TT stand for? :D

Cool action shots! It gives us a real sense of whats going on. I couyldn't spot any wavers. I'm going to check again!

So I wonder if you've caught our ABC Wednesday host Mrs. Nesbitt and Jon in any of those.

"Louis" knows you are busy this week end and may not have time to stop by - but he thought he'd check in and see how your "TT" weekend was going! :-)