RAMSEY SWING BRIDGE NO 5 AND A FLETCHER CHRISTIAN TALE 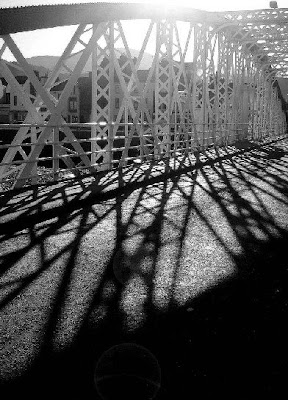 Ramsey Swing Bridge No 5. ( sounds a bit like a dodgy perfume)

Fletcher Christian. Now there's name synonymous with all things mutinous and apparently Manx, that is the Isle of Man. Ooh er. How exciting!

Fletcher Christian was born In Cumberland in England, however he was related to The Christians of Miltown Ramsey. So explodes the first myth he was a Manxman. Afraid not. His family though did at one time including the man himself seek refuge in Ramsey to escape bad debts in England though.

As we all know Fletcher Christian( Marlon Brando to me) instigated the Mutiny on the Bounty (more Isle of Man/Bounty links for another time) settled with a load of mutineers on the Isle of Pitcairn(many Manxmen amongst them) and then it all gets a bit Hazy. In other words here starts the myth and fact nightmare.

John Adams the last surviving mutineer gave several accounts of Fletcher's whereabouts, changing his story several times. Firstly Fletcher had committed suicide. Secondly he was killed by Pitcairn natives, and thirdly he escaped back to England, an onto the the Isle of Man.

The poet Wordsworth was distantly related to Fletcher Christian by marriage. It is rumoured that Wordsworth and Christian met in Bristol and Fletcher recounted details of the mutiny to him. Subsequently the Rhyme Of The Ancient Mariner was written and rumour has it, the Ancient Mariner was Christian himself, as it bore uncanny details to certain events of the mutiny and time after that were never for public consumption.

The date or place of Christian's death is still unknown. No remains have ever been found. Could he in fact of died on the island, with his Miltown Ramsey relatives? Who knows, but it's a great tale either way.

Just remember this blog is a bit of fun. So please think about your comments. Don't get all po faced. I'm not an historian, it's all whimsical Isle of Man related stuff, with some photography thrown in. Ok!
Posted by Jane Hards Photography at Thursday, August 07, 2008

"Louis" enjoyed this installment, as he has all the others, in the Bridge series!

What about Mel gibson? Interesting story. My favourite bridge to date.

Thanks for the baseball tips. I got two good shot out of twenty. Your advice on the speed was so right.

What a web of intrigue - both your photo and the Fletcher Christian story. A veritable bounty of image & narrative - you'll get no mutiny from me.

Well I love the photo with the marvelous shadows. Don't fret about me checking up on your facts. Not my deal. Thank you for your kind comments about my granddaughter's portrait. I think you will enjoy knowing that under that sweet dress, she had a bare bum. Yep, forgot her panties! Giggle giggle!

I'm loving these bridge photos. Plus your ABC Wednesday. And, well, to tell you the truth, your blog's just plain good and interesting.

I can tell right now, with bridge take #5, that I'm going to like all one hundred! :) This is great!

This will set the cat amongst the pigeons with the ‘Manx ‘n proud’ crowd!

history always brings an interesting to any photo

Other Fletcher Christians were Clark Gable and Errol Flynn, who in real life was actually descended from a member of the Bounty crew...

the shadow is magnificient and I like the choice of b&w which was necessary in view of the photo.

Am I under the impression that there's about 60,000 bridges on the Isle of Man? Surely there can't be that many!

Doesn't matter though cos they're all amazing pics. Loving it!
Ciao

Took me an hour to get onto the blog. Darn connection problems :(

Very interesting lore! Would be nice if it was true. Nice shadows effects of the bridge - a bit 70s taste.

Concerning Blogger: They have changed the language set-up for my Norwegian blog and altered the set-up of some of my links. The number of comments for ABC has gone radically down the last two weeks, but that is probably my fault and not blogger's. I haven't noticed if they have removed any extras. They may have - I thought I had passed at least twenty (usually 40-50).

The comments have vanished from mine too, but seem to be reappearing one at at time. No I have no idea either or an explanation. Can't sign into Blogger either. I agree infuriating. Maybe time to worpress?

This is certainly a fun series to follow, your photos and brief history lessons. I enjoy history.

Strange, about comments, and connection problems. I notice more difficulty in posting comments, they don't show up. I have been considering moving to a different format, (shudder, will Blogger read my comment and delete it?), but with all the links and name recognition, I'm afraid we would loose track of everybody.

I love these stories. Great photo to match.

Yet again a cracking piccie of the iconic swing bridge here in Ramsey. Love your style.....

Lovely photo and the Christian lore is fascinating. There are many Pitcairn islanders with that surname aren't there? Here's a link for further reading http://www.nationalgeographic.com/adventure/climbing/pitcairn-island/expedition.html

Great use of b&w, I appreciate the background you provide as well.

I really love this photo. (The contrast and all those angles!) And thanks for the fun lore on Christian. It's fun to imagine the possibilities.

You play so well with lights and shadows...
Fletcher Christian and the Bounty...Marlon Brando of course but also three aventure books among the best I've ever read.

Your bridge photo's are always well done and interesting. Really enjoyed the Fletcher Christian history too.

I am always partial to shadow photos, and this is no exception. Love your bit of folklore, too; not checking facts either, just enjoying!

When I checked one of my commenters' blogs today, he also was complaining about comments having disappeared. Hope it's not contagious!