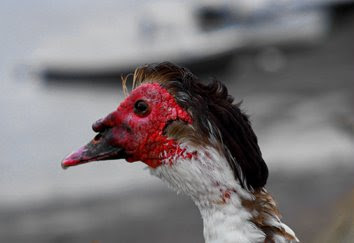 Flamming June was a flamming cold, it was not Hotter than July and August has been just plain Awful. Welcome to the world of the Great British Summer! So only one type of critter I could post today to go along with all the rain, the one creature as they say it's nice weather for is a duck.

Now what duck this is I couldn't tell you. Anyone out there in Blogland know, throw the answer this way. Do you like his quiff? Along with his bright face his head feathers brushed back really drew me to him. I think he was all spruced for his this little duckette girlfriend, which is why I was able to snap him. Poor thing she never did turn up.

I wasn't a close to the duck as it looks. For this shot I had what's called a telescopic lens. Not as scary as it sounds. It's a longer fatter lens as opposed to the shorter slimmer wide angle or portrait lens. To get the blurred out of focus background, and the focus on the foreground in this case the duck it's dead simple. Just turn the zoom on full, and focus on whichever part of the image you want as the main subject, in this case the duck. The light was really poor so I had the ISO on 600 which is not ideal. The higher the ISO the less definition you get, but you can compensate with practise by honing in as sharp as you can on the focal point, your subject. Again it's a manual shot. Auto would have just bleached the white feathers into a block of colour due to the poor light, and the background would be too dark, not allowing the duck to pop out of the image.

So was that info of any use or was it as clear as mud? Just trying not get too technical, but impart the know how as simplistically as I can.

Phantom of the opera duck.

Heck, I just point & shoot my digital and hope for the best. That is one weird looking duck! He looks mean!
We haven't had much of a summer over here either. The weather is changing every year.

He looks a kid of the 50's with that slicked back hairdo!
I think your instructions were pretty simple - now if I just had the right camera the lesson might work. :)

Babooshka: You have such different birds in the British Isles then we do in the USA. What a fancy looking duck.

Grin for the title - and we do have those Muscovy Ducks in the states, too! I think they are almost everywhere in the world! Our summer was not so smashing either - and that coming from the sunshine state.
We just had 18 inches or 45 cm rain last week. While urgently needed - it was a bit much for the mood - an entire week without seeing the sun!
Well - let's hope it gets better! :)
Cheers, Klaus

I got it. No you told it good. Still on the point and shoot but when I get the new one I can try it out. It's a duck honey is the best I can do.

Is it a Muscovy? Our weather has been awful this summer. Cool and wet..

The scientist who sits on the other end of my couch (seriously) says it is, indeed, a Muscovy duck. Somebody ought to talk to him (the duck, not the scientist) about using too much rouge.

Such different face! Looks like Phantom of the Duckala!

You weren't kidding about the quiff - he looks like he stole it from Elvis himselvis.
I enjoyed your techie explanation, thankyouverymuch.

A good sharp photo, like Klaus and Rambling Woods, I think it is a Muscovy. It's amazing how good the newer cameras work on the higher ISOs. I don't like to go that high, but have been using ISO 1600 quite a bit lately and on the Canon 30D and 40D, I have less noise than I had at ISO 200 on the old 10D.

What a funny face. At first glance I thought it was some kind of weird turkey.

That was a good tip on the ISO factor, I too have taken a manual mode shot of elephant's eye. I am awaiting your critical comments on that, especially whether i could have got a better shot with different settings.

I liked your shot very much and got to learn too. :)

Great closed-up shot! I am a bid afraid of big birds because of the beak, so for sure I'd miss capturing this one if I am there.

My critter is here. Hope you can stop by if you have the time. Happy weekends!

That's a duck??? It must have been eating radioactive refuse. Could it be a turkey?

I thought it was a turkey when I first glanced at it! HA, so much for what I know.
Thanks for the camera tips, a bit confusing, but maybe someday I'll be brave enough to venture off of the auto setting, someday, sigh.

I'm sorry, but I just about cannot look at the duck because that looks like blood--it's my fault, not yours. I read too many murder mysteries.

I really appreciate the photography info. I will remember to look back at it when I learn more about my camera's manual setting.

And I am so glad that you stopped by to look at the black and white and red all over post. I remember one innocent joke and one not so innocent one. I won't repeat either one, though.

Check out some just littered kittens

The Fonz of the duck world. Happy Days! LOL

Well captured, Babooshka.
I also have captured a duck who looks like yours with the red face, maybe mine also is a Muscovy duck.
When I use high iso as iso 800 for example, I also use exposure compensation EV +0.7. With my camera it reduces color noise and give better details in the shadows.
When I develope my raw file in Lightroom I must reduce the exposure with EV -0.7.
I seldom or never use higer iso than 400, as you say the higher the ISO the less definition you get.
Have a nice sunday and I hope you understand my oddly english. :-)

Yes, Muscovy duck - not attactive and their feet have claws. A friend kept some until they all flew off after ripping the felt of a vintage caravan to shreds.

Well, I have to agree with what everyone has said before me. Scary; a 50's duck with a bloody head. Hmmmm, very interesting. :-)I've never seen one of those before.

Ducks heart the rain! Too bad we don't although in saying that it has been SWELTERING here today - not typical bank holiday weather at all.

But then, it's supposed to be naff again tomorrow - there goes our one day of summer!
Ciao

Sounds as if the world over we have all been waterlogged in the last few weeks! It's no different on the east coast of Australia, especially where I am down south! Trying to get a sunny pic is sheer pot luck! Blink and you'll miss it!

Great duck pic! I have never seen one like this! If I had been asked, I would have called it some kind of farm chicken!

Terrific shot and love your tips! When I get a good camera beyond my basic digital, I hope I remember!

nice weather for a duck - must remember that one!

what a strange looking duck!

We have one like this. It's face is deep red with a bump on the beak. Tremendous close up.

We've had a cool. wet summer too. The ducks in the animal world and the weeds in the plant world are "grinning from ear to ear" - and yes I KNOW plants don't have ears. LOL Do ducks?

Cor! A funny looking duck. I've never seen a duck go mad with the lipstick before. Did his mummy know he had been playing with her make-up?

Beautiful in its own way, thanks for visiting

Poor duck, looked like it was bleeding first off, but on closer inspection realised that was obviously how it's feathers should be!

Fantastic shot, as usual. I'm sorry, but in my opinion this is one ugly duck! A duck with a mohawk. Interesting.

This is an interesting looking duck. Those feathers on his head look almost like human hair and remind me of the hairstyle that was worn by Elvis and others, way back when.

Great title! To be honest I'm not surprised his girlfriend didn't show, the wet slicked back look is so over....

LOL.. now that one could take the ugly duck prize hands down.. er feet down.

Yes we did have the same idea on these posts :)

Thanks for the techy info.

Great shot, but he sure is one scary looking duck!

He's a Venetian, wearing a mask.

Kinda cute in an odd way. Thanks for the technical info it alway interests how the pros do it.

I came via Strive Notes on a reco. without knowing what to expect. Blown away by your blog and what you are doing for the island as a one woman show.

Keep up the excellent work.

Muskovies aren't the prettiest ducks - maybe that's why they use all that make-up!
Another fine shot Babooshka.

That is one weird looking duck!

I don't know what kind of duck he is but he must be an English duck as I have never seen one like that in America.

He is a pretty cool duck. We had a few similiar to him at the pond we used to go to in Georgia. My youngest called them chicken ducks. LOL

What an awesome looking duck! I've never seen one like this in person.

I think your explanation of how your achieved the shot was great!

My goodness .. poor duck looks like the morning after the night before! lol It must have been quite the party!
Great shot!

It has hair, with a duck tail! If it looks like a duck, it is a duck; but what if it doesn't look like a duck?