Here, chair and everyhwere. Not anymore. 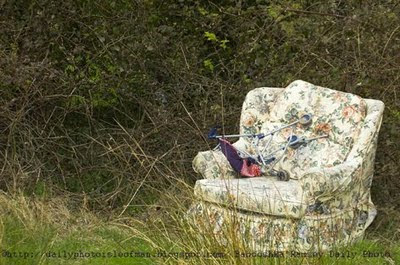 This it not my artistic statement just a load of rubbish


Long, long, ago we had the tale( should I say one of my more ferocious rants) about this pile of crap you see above. You all read the hullabaloo of me happening upon this unwanted chair and kids trolley just dumped in the nature reserve. You also read my pleas for idiot scum( they are not human beings) to not chuck out their unwanted furnishing but maybe pass onto charity, and certainly not dump it in a rural area. You also read and have re read by pleas to our Government here to clean up the area and remove all the garbage that gets dumped in what should be an area for wildlife, not the local wildlife's trash. So do I have to ask again....

..... No! I walked through there today(without the camera oops) and couldn't believe my eyes. Finally the chair has been removed. Don't know where, don't know when, hope we won't meet again don't know how, just know it has vanished without a trace in a lot longer than 60 seconds. About time too. Also good to see that there is some general maintenance going on and some tree planting. I know some of you assumed it was my Tracey Emin style art project but no it was a pile of crap( I never said what you are thinking, but I just might agree) and if it was, I could have earned a fortune by those who can't distinguish art from garbage. All I know is sofa so good. So long.


Do you get this in your area?
Posted by Jane Hards Photography at Wednesday, August 05, 2009

Have you been hanging around David McMahon's blog again?

Yeah, we get that kind of thing here. Not usually on this scale, where someone's tried to furnish a nature preserve, but there's enough other trash to more than make up for it. In fact, I posted a photo of just such a sight in a place I used to play in as a kid not too long ago. Maybe for Photo Hunt? That sounds right anyway.

Cheeses me off no end. Glad you got rid of the chair. (And I was kidding about the pun. I actually did groan, but I was snorting at the same time.)

Mojo- Now David really does have bellygroan puns. Luna tick being one of my all time favs. Think that's what I have been POTD for the puns. It's been a battle but as always I knew I'd shame someone into doing something.

One persons rubbish is someone elses
treasure.
A good way to get rid of what you dont want is to advertise it on Freecycle.

Freecycle is regional so folk dont have to travel far to pick up their new found treasure.
We often find articles that we dont want and put them on Freecycle, there's usually a few folk ring up - 1st come to fetch, gets there treasure.

great to hear it has been cleared away

Glad its been cleared up. I hope that the area remains clear all they'll have you back on the case.

One man's trash is another man's treasure, right? Hopefully someone found it and LOVED it and just had to have it for their cozy living room :)

glad to hear someone did something about it...travel the trails often and can not believe the things i find...really the effort to drag it out that far had to be more than taking it to a dumpster.

Well done. Knew you could do it.

Hip, hip, hooray! We must all respect our surroundings, or we shall be eternally lost. Thank you for the update, Babooshka.

Sure does look like someone got their money's use out of it.

cette photo me donne une impression de temps qui passe...
this photograph gives me an impression of time that passes...

Well said!!! We have an area out this way that dumped upon now and then. One time a small trailer loaded with or should I say crammed with junk--but thanks to the county workers (Isuppose) nothing has ever stayed longer than 3 days. Thank goodness. MB

Tracey Emin´s "my bed" and other artworks are very intriguing.
as they say in eLondonArt:
Tracey Emin’s art is one of disclosure, using her life events as inspiration for works ranging from painting, drawing, video and installation, to photography, needlework and sculpture. Emin reveals her hopes, humiliations, failures and successes in candid and, at times, excoriating work that is frequently both tragic and humorous.

Sadly we have rubbish dumped around here too in two of our local SSSIs (Site of Special Scientific Interest)The Forest Rangers and the Police frequently patrol but still lazy people choose to dump rather than go to the very well organised recycling centre.

I remember that, as I showed a pic of a sofa on top of a bus shelter the same day, or day after or something. Glad it's gone at last (the bus shelter sofa only stayed a few days, thankfully!).

Well done for highlighting and the update.

Looks not a bad chair! Do nicely for my dogs...

Here in France, or at least in my region, when we need to dump something, we take it to the rubbish bins and leave it nearby and you can count on someone taking it within ten minutes for the next Vide Grenier sale. The councils also advertise a date, usually once a month, when you can dump refrigerators, etc and again, they will be collected. I've never seen rubbish polluting the countryside around here.

Jilly-more reasons for me to move to France. Thank you for the Perpignan info too. Can't wait to go.

Yes, there are always shopping carts abandoned where I live. It sums up everything that's wrong with the world in one image.

Could you do something about the lack of rubbish bins here, be grateful. The terrorist excuse is a cop out to me. A bomb could just as easliy be dropped on the street with the rest of the rubbish. Maybe in was those manx faeries that whisked away the chair. Think they'd like to come to London?

We don't have people leaving their trash out like that in my town. They would be heavily fined.

Some knuckle head dumped trash on our road (two grande bags..sort of in the bushes) it nags me when I take my walk..now it's starting to rip open -YIKES

I see where Tracey Emin is coming from. I see where you are too. To make rubbish look artistic is a gift. You are both gifted, you just choose to show humour. Step back be serious and the art world would take note.

Glad it's gone. Maybe your rant did some good.

Yeah, every few weeks I come across discarded beer bottles in the fields and the occasional garden along my walks. Really ticks me off.

I see Tracey Emin popping up in many various UK stories and never in a good light. I have to see if there is any truth behind that.