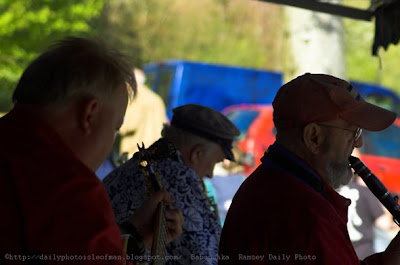 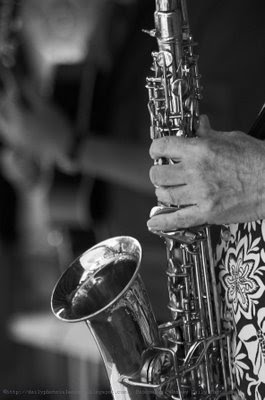 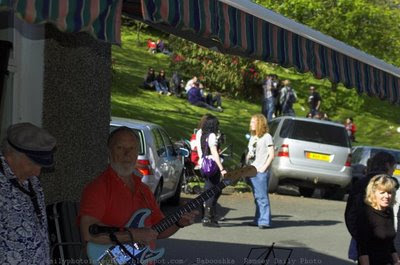 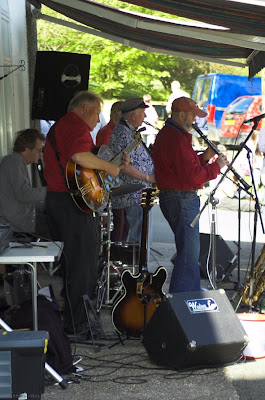 
This week we are up to R in the ABC so I've thrown in a little Manx for you roie-yssagh. Ah but what does it mean? Read on and all will become clear, well I hope so. This is me remember, all for a little lateral thinking. For now though the images, all five of them,(one pic may not open) of the Manx Jazz Kats, who formed in 1993 and regulars on the gig circuit here(yes locals!)playing outside the Riverside of course at the Laxey Blues Festival. Terrific they were too. Terrific to photograph as well I might add.

Last week I showed you the guitarist and the saxophonist. Well guess what the saxophonist left a comment to tell me who they are. These are his words below


"Hello Babooshka
Well, the floral shirt and the alto belong to me, Colin Clark of the Manx Jazz Kats.
And the blue bass guitar and the red shirt belong to Robert Woollams, our bassist.
So, fame at last!
Before we did our set I made comment that the blues festival was the only gig we do where appearance seems to count for more than the music, so I am now feeling most prescient"


How about that! So there you are, but note the closing word, prescient. We do like a wordsmith on this blog don't we folks? Prescient means foresight like the prediction of events or outcomes, foreseeing a certain situation. Colin Clark spooky predictions about his own shirt, so true and used the marvellous word prescient to sum up. Prescient in Manx is you guessed it roie-yssagh. Now who could have predicted Colin, you would choose the word for R this week. Most roie -yssagh indeed.

Posted by Jane Hards Photography at Tuesday, May 12, 2009

I love the two fist photos. The b&w is the color of Jazz, and it goes very well on the Saxo, we can see shadows and reflections on the sax

Yo B, Clevercloggs. Love the guy checking you out!

Thank you! Just thanks for showing so many from the LBS.

I got REALLY (another r) scared when I saw your R post, thinking it was now Wednesday. But no matter! Mine's up tomorrow, but I love your rockin' r photos.

Look very interesting. I would love to stop and listen to them playing.

Hehehe, same thought Bibi had. Thinking I had missed a day. Phew. I like the Manx-lessons. Wondering how to pronounce it.

love the b&w pic! as always, an education!

Hi! Me again. I knew something was wrong, and I see Carolina (another dog avatar!) saw it, too. It's Q tomorrow!

Hi! Me again. I knew something was wrong, and I see Carolina (another dog avatar!) saw it, too. It's Q tomorrow!

Very neat that he found your site and left a comment.

Really glad to see you're out of jail. Bet the band was awesome. And you've given them so notoriety.

OOPS! Sorry everyone quite right it should have been "Q" this week, but my scheduled posts have published "R" instead "Q", re my dates mix up. Didn't notice as I had to go straight out this morning. Ah well, enjoy my mistake.

Nevermind chuck. Don't know what your ABC is anyway. Can't open the 5th but 4 good ones.

Your jazz-based photography is always of a brilliantly high standard love! And your anecdotes and history lessons even more so!
Never tire of Ramsey!
Ciao

Great mistake Babooshka. Love the piccies, especially the first one as well as the new Manx word. Just wished I could have attended the festival. Still there's always next year.....

We will always enjoy your mistakes!
I like Jazz and of course 'The Blues.
Super shots. MB

You had me confused there for a moment, Babooshka! But hey! R, Q? Still fun photos to show what great blues festival it must have been. ;-)

The Manx Jazz Kats is the coolest name ever!

Great shots as always. This was a great R for Q :)

Cool photos, especially like the b&w one. And it was nice they got in touch with you. Too many big words for me though!

Maybe your it is quirky to post the wrong letter. You said you would be posting a Laxey Blues Festival Album on Facebook? Is that still happpening? I know you're busy but dying to see more.

Great post as always, don't care if it is the wrong letter! Keeps us paying attention. Wish I could have gone to that Blues Festival!! Look forward to more!

Look at you : ). Practically a celebrity! I love your R. It is brilliant. I can almost hear the jazz!

Laughing at the 'r'...but the photos are wonderful and the story is superb! Quality post!

LOVE LOVE the BW of the musicians hands B. Just perfect.
V

Superb, Babooshka, simply superb. I love the photos, the comment and your enjoyment of the wordsmith! That black and white photo is my favorite. Thanks.

Great R post! What happened to your Q? Uh?
Thanks for your visit!

Oh well, everyone can make a mistake. With such a great R-post you don't have to stand in the Queue next week...

Wow, you are way ahead of us, but anyway, very nice post. Thanks for sharing.

Fabulous pictures! I always adore music and all things about!
Léia

My turn for technical hitches. Cant open any of your links. Still happy with what I can see.

I love the jazz saxophonist in black and white.
Janice