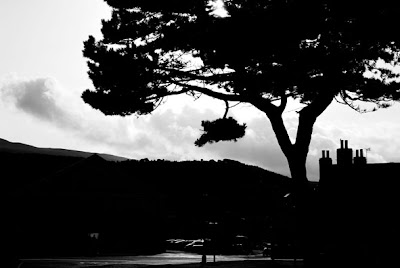 Not that you can see it but the bus station is the building on the left under the sliver of the mountain. On the right hand side you can see the outline of the tree you have seen before. The one with the huge hand sign on it. To the right of the tree you can trace out the outline of chimney pots. Some days you will actually see smoke rising from those pots, especially with the price of fuel this ensuing winter.

Why Silhouette? The weather and lighting conditions were fairly poor so again work with them, not against them. I took several, trying to obscure as much as the sun as I could, but with light enough to serve as a backlight, to bleach/whitewash the sky, but keep a little cloud definition. Again just fiddle around with the manual setting until you get the desired effect. A simple desaturation to strip the image of any colour, like the road lines or cars to finish the job. No need to alter contrast or brightness, as I wanted to keep the sliver of ground light.

I'll show you Ramsey Bus Station in a more visible straightforward image next week.Only if you're good boys and girls, I'll even throw in a bus, hell I'll even show the bus queue of locals. The image today was purely for me. Not meant to be a work of art or indeed show you much of Ramsey. Just an image I shot this week that I personally like, of an outline from an angle I favour.

I'm Blog hopping light again. Apologises for my lack of response to emails, I'll get there. Not just the blog plagiarist to contend with, but my usual printing site and I may be parting the ways which means I'm also sorting out that end of the photography business end.

Imitation is the sincerest form of flattery
Wrong!
It's theft, get your own blog or pay for my words and images.
To the theif.

All the best with all those distractions!

I recognise the the place even like this. Keep on blogging! The idiots will just fade away. I emalied some island bigwigs about your blog and your photography. You are the best. Enough said. Thanks for the Mannanan link I promise I will check it out.

I am sorry you are having problems;

Thank you for writing a comment on my blog....

I stopped my blog for the same reason, and re started under another name. It happens when you are popular or have good photos. No idea where Ramsey is. Never heard of the Isle Of Man but it looks like a pretty place.

I love this photo and how you play with your camera on M. Sorry you are having this scraping trouble.. I have no tolerance for this blog scraping.. I hope you have reported them to blogger for sure and have their blog removed immediately or if they are on another blog host contact them.

Well I guess I am out of the loop because i am clueless. I do know that I like what you do and have learned so much from you. MB

hope all is well.

"Louis" loves the effect here, Babooshka! You really do fine work in black and white.

this is really thoughtfully beautiful!

not easy to do as photo, bravo for this b& w. I see that you have problems with thieves blogs o ;(( I hope this will get better but it's not easy to make understand

A bus station never looked so good.Pity the Scots Pine unbalanced it a little - get your saw out.

Certainly a different kind of shot. The sun was out here yesterday, but disappeared at lunch time, then came back out when I sat back at my desk. Typical!

Pretty is a pretty does.

I like bw photos, especially ones like this. I am sorry you are continuing to have trouble with people snitching your photos. That is so low.

Sorry for Your photos which are snitch...

I'm sorry my comment struck a raw nerve, it was meant to be helpful but clearly it wasn't. I don't understand why anyone would want to steal/reproduce another's work but I hope you find the culprit and that it stops soon.
Another great photo by the way.

Beautiful b&w silhouette!
The photo on the 21st post is absolutely gorgeous!!!

Grandanglais. Oh no it was helpful. Just been the final straw, another one filching, taking credit and even trying to sell them on. Being new to the blog you won't know the full story but I'm not the only one it's happening too, I'm just the one that will sort get the buggers.

WOW! I didn't know bloggers are being ripped off! Sorry it's happening to you.

People are strange aren't they? Sorry this has happened to you.

I am so clueless. I thought the photos on our blogs were too small to do anyone any good! Yikes. Well nobody wants to buy my photos and I doubt want to steal them either. I am showing my photos at a small art show Saturday. I am sure I will haul home as many as I took.

Well I do love this silhouette B., fine job here. Thanks for the info on it too. Always helpful.
V

I have not worked a whole lot with silhouettes. After seeing your shot today, I feel the need to try this once again. Thank you.

Virginia well done. Told you so about your images. Have to take images of the images on display.

Very stark, striking! I like the way you turned a negative situation into a creative opportunity.

Many bus station attributes are best not seen :)

Very pretty, Babooshka. Wish I were there.
Well, I have been close, I've been to your train station which has to be near. :-)

I'm off on a mission too, I'm heading south and won't catch a thief. If I see yours I will tie him up and call you.
Seriously, this is serious business, I suppose it happens more than we want to think about.

I do have a late WW post showing a few pictures of last year's travel south.
..

Hope you get the plagiarism issues sorted. It's hassle you don't need isn't it?

Fabulous photo. Love everything about it. Question. How do you track down where your work is being stolen?

Love your photos and intentions. Such a shame you are having problems Please DO report it to Blogger.
We both post pictures of our small islands.....so similar...so very different. So very interesting!
Aloha from Waikiki

I'll guess lovely photo (as all I can se is a mini box with a red cross!)

I'll get a better view with bus and queue next week :)

I love the photo Babooshka!

I've obviously missed something here, but I sincerely hope you continue posting. It is a delight to see the love you hold for our island through your talented eyes.

I think it's a great silhouette. It's such a perfect one it almost looks like one of those cut-out silhouettes rather than a photo.

This is a terrific silhouette. I love the tree against the sky.