WE'ED WELCOME YOU TO RAMSEY, BUT IT'S JUST GONE TO POT 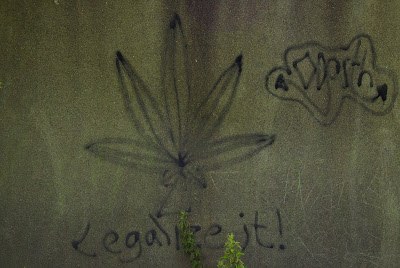 For those of you expecting one of my ABC posts we now have a brand new blog over at ABC WEDNESDAY. I will be displaying all manner of non related Ramsey pics there, mainly France if you want to stop by there and view the others. Mine is the Arc In the Park, Nice, France.

What can I say. Took a detour down a back alley. Now this is not your city "I'm going to get mugged for my Manolo Blahniks"alleyways, we have perfectly safe ones. We do however have the odd bit of graffiti. Who could resist little beauty!

The plants by the way are just weeds(oh dear I mean wild flowers officer) but I wanted to leave them in the pic just to well amuse me really and to get you to do a double take. Strangely the first part that caught my eye was the wording. Legalize spelt the American way with a z not a s.
Talk about not seeing the big picture! Then perhaps the artistic merit, the tag and the fact it was a statement rather than a question. Note the ! instead of a ?. Someone obviously has made their decision.

Now we don't have major issues with drugs of any sort on the island. There is the odd bust and raid. Boats do get caught at customs. Sure there are many a baby pot plant being green housed somewhere, but as I said it's really a low priority issue for us.

So do you agree with the author of the statement. Does the medical evidence that it eases the pain of certain types of ill health out way the steady decline to using harder drugs, psychosis, and resorting to crime for others. Anonymous answers are fine, if you don't want to name yourself. Understandable for this one.

Well this isn't my most aesthetically pleasing image, but it's going to be one of my most controversial. Hey, you know with this blog, it's always pot luck what you get.
Posted by Jane Hards Photography at Wednesday, July 23, 2008

There are worse things than reefers.

To toke or not to toke, that is the question. ;) Seriously though, I don't care for the stuff; so whether it is legaliZed or not, it makes no difference to me.

That said, I find it odd that this form of drug, "weed" is illegl, yet another form of drug, alcohol is legal. As is caffiene, a drug...which I must say I am a full fledged coffee/espresso addict.

Remember the Prohibition experiemtn that The U.S. inflicted uopn this nation so many years ago? It would appear crime flourished with moonshine and speakeasys popping up from the gangsters of the roaring 1920's.

Not an easy question to answer. To make it legal would be wrong, but the results of it's non legal status is also wrong. And lastly, does mankind have the right to deem a naturally growing plant as illegal?

Is it that some men call "Rasta

when something is banned, it makes it more desirable...

hehehe
People don't even pretend to try to hide the fact that they are smoking polio weed in The People's Republic of Berserkeley!

"Louis" once attended a performance of the San Francisco Opera - and a bunch of the Birkenstock crowd was passing a joint around their group IN THE LOBBY OF THE OPERA HOUSE during the intermission!

there is a quite strong movement in Hungary for legalazing cannabis. But the opposite movement is strong, too!

Banning something just makes it more attractive - the forbidden fruit.
One should be free to decide whether to smoke pot or not.
I've lived with friends who did, got quite happy on secondary smoke but never felt the need to partake my-self.
And, as it's been shown to be a helper in certain medical conditions, I think it's wrong that patients who need it's help should be criminalised.

No question ut should be free and easy. Neat blog.

I don't have an opinion either way. I do not smoke anything. But I do drink alcohol and take pain-killers. To each his own ...

Neat post and even neater puns. Puns are meant to make you groan and shake you head with embarrassment ... aren't they?

I'm not into illegal drugs, but what's illegal in the UK could be legal in Holland.

But if I were giving birth, I certainly want drugs!

Thanks for visiting Norwich Daily Photo and leaving your comments.

Oh we see that lots where I live - just say no, kids! I do however believe that people with arthritis and such like should be able to have a small amount available to them on presciption to ease their pain.

There was this old granny who used it in her cakes and coffee and was sent to prison even though she was just using it to ease her arthritis - that's shocking in my opinion.
Ciao

This sought of thing lowers the tone of Ramsey. Please don't show the rubbish and the graffiti.Please concentrate on nice photographs or don't bother showing any!

Legalize pot; criminalize Oxycontin, and put the manufacturers of it, and purveyors of it, in jail.

Babooshka, thanks for sharing...what a great way to start a dialog. I also think it's great to show our areas "warts and all" as we say here. If we want to visit a site that's all smoke and mirrors we can go to BushCheneyRove.com! (OK, I made that URL up but you get my point!)

that weird graffiti above the plant looks like a stoned face.

Well I hate it and your blog. Get a life or move. Why show good photographs with graffti ones?

Being a Gemini I can see all sides of the argument but recent research on the relationship between psychosis and cannabis use makes interesting reading. We've also had locally several fatal road accidents where the driver was high on the drug so if it were to be legalised there would need to be some regulation in place to protect others..
Good post and I too enjoyed the word play..

Ganja do somethin' about this graffiti? Weed like to see more. ;)(um, I'll get my coat...)
It's the interplay of bad and beautiful that I find so interesting about Ramsey and the Isle of man. I think it raises the tone.

i love graffitis. thanks for posting it.

I think it's good to show all sides of an area - not just the beautiful (and I've shown grafitti more than once on mine). Personally I'd stick with the situation as it is, but allow it to be prescribed in limited situations such as extreme pain relief when nothing else seems to work. But I think the dangers re psychosis in particular outweigh the benefits, in most cases.

I like seeing the grubbier side of Ramsey! I don't really have views either way, sorry to be so on the fence. I like the pun though...and Knoxville Girls :)

I think we should say no.

Babooshka. Firstly I'd like to say well done for showing Ramsey as it is and not just the chocolate box image that people like Manxie Cat and IOM resident ask of you. Why miss out the dross that just wouldn't be right would it. In my opinion its as much part of Ramsey as the good stuff I live in Ramsey and love the town and your blog. I've had my own site for over three years now and I report and photograph the good, the bad and the downright ugly and let me tell you there is a lot of ugly out there but thankfully the good far outweighs it.....And secondly thank you for visiting my site and making your kind comments its very much appreciated. Oh and thirdly keep up the good work

i say legalize it... and thanks for showing us your city, as it is warts and all, and not trying filter your content and see things through rose colored glasses...

hmmmmm an interesting blog.....I like all your pictures you show.....I am constantly amazed at the people in the world who feel they have the right to censor you or anyone...it is a BLOG...sheesh....perhaps they would be better off doing their own and staying out of yours.....

Quite a controversial topic. One of my family members who shall remain anonymous was able to get some marijuana for a friend who was dying of breast cancer. The relief it brings under those circumstances was enough to convince me that it should be legalized for that purpose BUT how is it monitored then? Good question.

Only since you asked, I say decriminalize it. Tax it. Fund schools and social projects with the money from it. Regulate it like tobacco, alcohol and firearms. Make and enforce strict penalties about driving under the influence of it. Take away kids' easy access to it by taking it out of the domain of drug dealers and putting it behind the counter at the convenience store, must show ID to purchase.

Love the honest representation of your home. This is a wonderful blog.

Well said Mannanan, keep up the great work Babooshka, life is good and bad, not all sweet smelling roses, surely a blog should be honest of representative of what it sees. Manxie Cat and IOM resident get a life, and live in the modern world...

I love your headline and I love the graf. Whatever way you cut it, writers keep the conversation alive!

Love the headline and the puns.
I think if people do not like a blog, why are they reading it? Duh!

Cannabis - definitely not legalised, but a prescription only form (as a controlled drug) I agree with as long as it is clear what the potential side effects are, and that the pain or whatever warrants taking that risk. The risks are real. Proven. Like lung cancer with smoking. BUT not everyone who smokes gets lung cancer. Not everyone who uses cannabis or marijuana becomes psychotic. They are the minority. They are the "lucky" ones. It is not about it "leading" to hard drugs - I agree, often it doesn't. It's about the effect of this drug on your body. Devastating and irreversible. I have seen too many.

It is a shame manxie cat and IOM resi hide behind anon comments.

It is petty-minded people like them that would put me off visiting not what I see on your blog.

Instead of criticising your warts and all they should do their own alternative blog -- now if you ONLY showed the warts they would have a point but you concentrate mainly on the positive side of things - why can't they see that?

Was going to comment on the skywatch pic (title made me laugh) but then I scrolled down to here and it is time I was gone.