RAMSEY HARBOUR OR DON'T TAKE PHOTOS WHEN YOU HAVE HAD ALCOHOL! 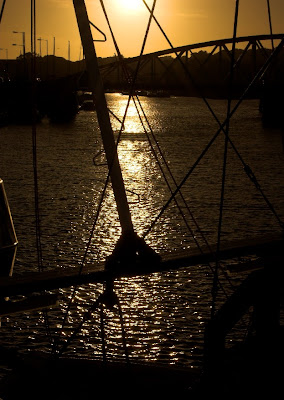 It happened one night! What I'm not quite sure but , one minute I was fine the next I felt like I 'd been kicked in the stomach by a mule and then being held in a vice grip. Now it was it was either, the curry, a bug, or what I suspect the booze. Not to much, I hasten to add, but the pipes not being cleaned properly. Put it this way next time I'm in a certain pub, I 'll play it safe and have spirits. Anyway, we had to cut short the night out but not before I simply had to take some photos.

I just couldn't resist the light. I know not very sensible but maybe it was because I was feeling a little delirious that I started to see the most wonderful shadows, shapes and lines. The colours seemed particularly golden too. So after about50 photos later we finally went home. As for Ramsey Rocks well I do have some, but the night was shorter than planned and so was the photography.


So the moral of the tale is well I'm not sure really. I 'll let you be the judge. Would I have noticed the golden tones? Would I have decided I simply had to photograph on bended knee through the boat masts. Not sensible in a skirt and killer heel boots may I add. Would I have even noticed those lines if I hadn't been bent double in pain and so low to the ground? Who knows? So was it worth it?

So, what lengths have you gone to get a shot, and were the results worth it?
Posted by Jane Hards Photography at Tuesday, July 15, 2008

Its a super photo ('super', I sound like someone from the 1920's!) The colour and the light are fantastic. I think the combination of curry, booze, bug lead to this! Was it cheap wine? It has that effect on me. Like having a thorough clean out!! Sorry. That was to much. Lol.

Sorry to hear that you weren't feeling too good but what a fantastic photo. I just love it. The colours are exceptional. Dodgy pint? Please let me know which pub. Hope it's not my regular haunt.

Very beautiful photos. Love the reflection in the water. Thanks for visiting my blog. Have a nice day.

I love how you wrote this!! I like the golden tones and I am some what embarrassed about snapping some photos.....so I guess I don't go that Far.!!! Hope your next evening at the pub is as good!

this picture is as brilliant as others posted by you earlier!

photo of a dream, the light and colors are beautiful.

Well, despite your misadventures, this is a lovely picture. Great light.

This is magnificent! I absolutely love the color! Terrific composition!

It's an inspired photo, & I'm all for alcohol fueled photgraphy - you saw yesterdays odd shot!
But sorry you were feeling ill that takes away all the pleasure.

Just goes to show that a great photographer's eye is always there - even when doubled over in pain. Beautiful.

the things folk do for art -- just don't go cutting any ears off like vincent.

Aww, the things you'll do for your art eh Babs? I hope you've recovered - I hate the thought that you're suffering from some horrible disease like thing!
Ciao

I love the golden colours of this picture. I can't make up my mind though about the various ropes and masts and suchlike. Actually I'll tell you what the ropes remind me of - do you remember playing cat's cradle at school?!

You two have certainly suffered for your art lately! Makes me feel a little guilty for the pleasure, but I'll get over it! LOL. This is a great shot...wish we could see all 50!

Definitely worth it. Have another drink. LOL

I think this picture is lovely, despite its questionable inspiration. Thank you for visiting my blog.

It's so beautiful again hun. Keep up the good work.

From my perspective, your pain was worth it!

The lines and the angles are stunning against that sky. A terrific study ... under any conditions.

Another blogland Award is winging its way to you from me.

I too love the photo...and for your comment about soccer...both of my sons played soccer as children, one, on the national team, the other still plays (he is 32) and now is the coach of both of his girls teams. Both teams have girls and boys. Soccer is growing in the US but it may take many years to be as big as it is there. Football, baseball are the main sports here.

Booze or not, I think it turned out lovely.

For love of the art! A trooper you are, Baboosh, and your camera work reflects that in all cases. This one is a beauty as well. Hope you're straight on course again.

Whatever the reason, the shot is worth it. Take as many as you like until you get one that really like to. If you can plan, it is better but spontaneous shot gets really interesting in many cases.

Love the photo and love the story behind it, that golden colour is just beautiful, very summer evening.

What magnificent picture, many congratulations.

Whatever made you bend over in pain---I am sorry about---but what a great shot. great colors and lines.
BTW I came back---I knew I would. MB

The light is indeed splendid. The masts and lines look like modern art. You suffered for your art, but I hope you're done suffering.
Cheers!

I've found that some of my better photography was taken while drunk.

Not doubled over in pain, though, so good for you. :)

Beautiful shot. I like the lines and shadows, too, and there's no booze in my system! :o)

Thanks for stopping by my blog. Looking forward to more photos.

I love all the silhouettes in this shot :) Rather stunning, indeed.

superb...calm and so warm.
great shot.

What a great read this is... I have the same trouble thinking pictures... I seem to wobble on my high heels and my skirts are far two tight.. I look like something from a Viz comic.. ha!..
Glad you and Gary ( say helloto him BTW) enjoy Bakewell and the spookiness we got up to..