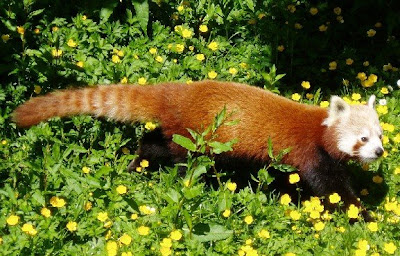 Due to there being lack of pictorial evidence of the escaped Wild Wallaby, Big Manx Wild Cat, and no new sighting of George the escaped pelican, I give you a very cute Red Panda all the way from Curraghs Wildlife Park here in the Isle Of Man.

Obviously the Red Panda, or Lesser Panda (shining cat) is not a native creature of the island. Well if we don't have foxes we are hardly going to have these cuties running around. Curraghs Wildlife Park has been paramount with the breeding of the cute little animals which are sadly on the decline, for many reasons ie. habitat fragmentation in their native dwellings of China, Nepal and Myanmar to name a few. So much so that they are classed as "threatened" on the Conservation List. Thanks to not only the wildlife park, but others around the world, these other wordly cuties are currently breeding and hopefully can be saved.

Pichu and his mother Isla, the escaped Red Pandas from Scotland were of course originally from the Island. We breed adventurous spirits here.

Gary and I are both a little unwell this weekend and mostly been confined to the house. Gary by the way added his comment on my skywatch pic out of his own volition, about him being my witness, being there when the image was taken. I am still annoyed at the idiots who dropped some lousy comments on about the image not being real, and if it continues I may have to rethink the blog. This also goes for the emailing idiots. So apologises for not visiting, just hadn't got the inclination too.

Hope you're both feeling better really soon. IGNORE THE IDIOTS! For every one of them, there are HUNDREDS of us enjoying your blog. This little fella is adorable! I don't think I've ever seen one.

Babooshka: What a great animal to show, theya re so colorful.

What an interesting critter! looks like a mix of a fox and a raccoon.

what a beautiful creature!! hope you two feel better soon....

Great shot! Sorry to hear you're not feeling so good. Get well soon.:)

Very cool. I agree with B13. It reminds me of a cross between raccoon and fox. Also I would like to reiterate what lake lady said. Ignore the idiots. I saw your skywatch photos and they are gorgeous. I have seen sunsets that look like those before. They are few and far between but they are real. Love the pictures.

I've never seen one of those. Very good photo!

what idiots - all they need do is look up 'red panda' on the internet and they would have realised it was real!

He's a very fine animal, I think I prefer him to any fox.

Do hope you're both feeling better soon.
As to those idiots - forget them they're not worth a thought, certainly not one that means you might change this terrific blog.

Sorry to hear you are both seedy - get well soon.
Fascinating post. I had never heard of this creature.

I've not seen one of these, so thanks for showing it.

Try to ignore the idiots. There will always be the envious ones. Of course those shots were genuine. These skies don't happen often, but they can be seen if you keep your eyes open. Of course, if their heads are always stuck in a beer glass or up their own behinds they wouldn't know this! Keep going.

What a great shot! Thanks for showing him and telling about its background. I hope that you feel soon better and please don't leave blogging because of an idiot who tries to insult you. Your entries are always interesting.
You know something: we get more and more non indigenous animals here, because they are introduced by people who liked them first and then want to get rid of them. Now there is an invasion of raccoons. I also took pictures of Muscovy ducks, which were bought by a Dutch farmer.

Only two things are infinite, the universe and human stupidity!

You are doing fine, Babooshka. All bloggers receive comments from trolls. Just think of all your happy readers instead. And, of course, this is a lovely picture again; the variety on this blog is really nice.

Never heard of red pandas before - just been looking at the delightful pandas on Hangzhou DP (they'll cheer you up a bit - they did me).

As for the idiots here here to what t'others have said about them.

It looks like a result of love between a cat and a fox ! never saw such a critter !

Whenever I've been to a zoo, etc these cute animals are always in hiding. Its good to see one at last!

Please ignore the miserable sods out there. As I've said before, don't let the bastards get you down. There are more of us out here that love your blog so don't go changing (is that the start of a song?!)

Sorry you are under the weather. Hope you are up and around again soon! I did think it was an odd looking fox before I read your post! This is a beautiful animal. I have heard of them, but don't think I have ever seen one. Not what I think of when I hear "Panda." Ironically, I went to see "Kung Fu Panda" last night... : )

Love the red Panda...I saw a film recently of a baby one being suckled by a cat. I'd never heard of them before but they are seriously cute.

Please, please don't be bullied into closing the blog...I do enjoy your pictures and stories.

Please try to ignore the crazy idiots out there. It's not worth the aggravation to worry about them. Of course the photos are real!

Bibi would love to chase this little guy, but am afraid she'd come out the loser. Ignore the detractors... Don't let them affect you.

What an interesting little animal! He looks busy too! :-)

Have a nice Sunday!

A fine capture of this animal!

They are SO cute and this is an adorable photo of one!

I hope you both feel much better very soon, and I am sorry to hear that you have had to deal with some idiots. Please, do not allow those people to cause you to give up your blog - that would be a terrible sacrifice!

Never saw one of these before. Thanks for sharing!

Ignore the idiots! They're the same type who were POSITIVE that the earth was flat and that giant squid didn't exist.

What a beautiful animal! I hope they can be saved too. Thanks for stopping by earlier.

Cool photo of the Red Panda ... thanks for the info and the visit to Small Reflections.
Hugs and blessings,

Those animals are so photogenic - right up there with meerkats & wombats. I got to see some capering & cavorting in the Berlin Zoo recently - we have a lot to thank wildlife parks & zoos for...

Oh, very nice. The Knoxville Zoo has had a very successful breeding program for red pandas.
And as for trolls, they like to annoy. Ignore what they say. As my dad, an old Navy veteran, might say to them- that's the biggest steaming pile of Happy Horsesh-- (um, manure) that I've heard today.
Be well.

Hi. This is such a wonderful photograph. Thank you for sharing this.

Do not feel bad... I also encounter some people like those... they're just insecure.

Keep on smiling and shooting! :)

Sorry to know that you haven't been feeling well. Hope you feel much better now.

It's a beautiful animal. I've never seen one like it before. Great shot.

red pandas are so very sweet. used to tend to a pair of them when I volunteered at the zoo!