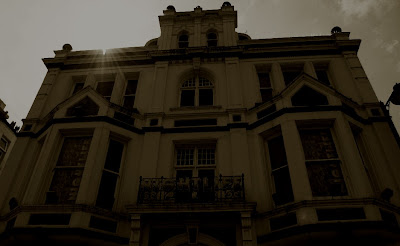 This is the world famous Nightlife. Ok, it's not at all world famous (or even infamous), more island famous. It's Ramsey's one and only nightclub, imaginatively entitled Nightlife. It also has alternative names locally of "fightlife" and er another name, not for a family blog. Just substitute a letter with a "sh" and I believe you will arrive at it's other not so pretty alternative name. This is where when the pubs close, you will find the local wildlife after hours dancing round their handbags , spilling beer, falling over and having a fab time in this building right along the harbour. It's also where the world famous Patrick Swayze was found to be dirty dancing, not putting anyone's baby in the corner when he was filming "Keeping Mom" a couple of years back. Patrick by the way described the island and the people as magical. What he thought of Nightlife has never been recorded, or if it has disclosed. I'm sure he thought it was magical too. Ahem!

Of course it has done nothing but rain here, with the odd dry spell. Typical! Ramsey Week and the camera isn't witnessing much action of it. Putting a few bits and pieces together and will plod on and get the locals somehow.

Awards time. I have been given 3 lots of awards recently so it's a bout time I dished them out. I recieved this one twice. First one was from Quin at LENSES AND VISIONS called Arte Y Pico award.

1. You have to pick five blogs that you consider ‘deserving of this award for their creativity, design, interesting material, and which contribute to the blogging community, no matter what language they are in’.
2. Each award has to have the name of the author and also a link to his/her blog to be visited by everyone.
3. Each award winner has to show the award and put the name and link to the blog that has given him/her the award itself.
4. The award winner and the one who has given the prize has to show the Arte y Pico blog so that everyone will know the origin of the award.
5. To show these rules.

Thank you very much for the comments that you have left on the Daily Photo site that I started for Costa Rica about a month ago. I have enjo hope that our respective sites help open a window for the world to be more familiar with our little corners of the planet all of us share.

That looks like a beautiful old building. So glad it is being used!!!! Wouldn't want such a place, to fall into disrepair.

Wowie, what a rocking place! I'd definitely visit whenever I go to the Isle of Man. Am very, very curious...

And thank you for the award! This coming Saturday, I'll be posting some photos of our Greek vacation seen through the eyes of a mystery passenger who accompanied us, so I hope you and those reading this will drop by...if you're curious like me!

What a wonderful sepia image. I would not have guessed it to be a disco.

Fright Life....What a place......In the seven years I've lived here in Ramsey I've visited on three occasions and on all three occasions I've been a bit worse for wear.All that I can recall is that the floor is rather sticky.... Still at least they haven't knocked down what is a fantastic building which was once the Saddle Hotel....See image here...

Fright night is right if I ever got out on the dance floor. I have two left feet when it comes to that sort of thing. But what a great place to simply people watch.

Thank you for this award, very much honored and flattered to be recognized. Thank you!

the one and only nightclub, that must be pretty deja vu for everyone...

It's a dump but no where else to go. Who can afford £30 taxi from Colours!

You make it look like something from the Addams Family!

Congrats on your award - you deserve it.

Great blog! Love this image of that great building... I grew up partying in a disco named "Suds & Sounds" & this place sounds to be cut from the same cloth. Mahalo for visiting me!

that place has to be haunted!

Cool photo - did you dare take a picture of the inhabitants?

A moonlight shot of Ramsey's nightclub!!!
But with all the things you have been showing and the long walks I will take along the seaside, I will be completely asleep by the time this place gets rocking!!!

If you went there would you have 'the time of your life'? Lol. The way you've described it, I doubt not!!

Awesome shot and a nice building.
Sounds like a great place.. ;-)

Thank you so much for the award, it really picked me up.

Oh, Knoxville has those kinds of places, and being the absolute curmudgeon that I am, I tend to agree with the "sh-" title. Hey you kids get offa my lawn! This is a very atmospheric shot - maybe vampires dance here.

And well hey, thanks for the award! I really appreciate it. And of course its on the one day I don't swing by to visit.

Love the building's architecture and the glint of sunshine....