THE TALE OF THE MODDEY DOO MYHTICAL DOG, THE MODDEY DHOO MOTORCYCLE CLUB AND A KNOXVILLE GIRL 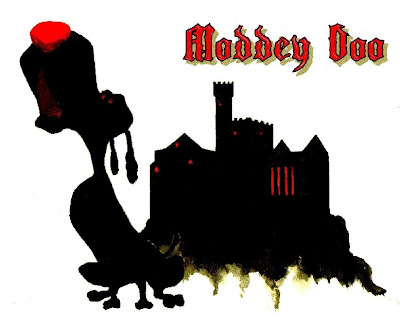 What is this all about then? Six degrees of separation that's what. How confusing is the title? I suppose I had better explain. Are you sitting comfortably, then I'll begin.

KNOXVILLE GIRL sent me and email about a couple she met called Marie and Dave in Knoxville. They just happen to be from the good' ole Isle of Man, and get this they know acquaintances of our very own cdp KNOXVILLE GIRL. .They are also the founders of the infamous MODDEY DHOO MCC .Well known around the island and in biking circles worldwide and by all accounts a rip roaring bunch of biking folks. Where else would you find this lot but on the Isle of Man, the home of the TT Road Races. The aims of the club are.

1 - To enjoy all aspects of motorbiking in the company of like minded people
2 - To attend and organise social functions as a group
3 - To help other members in any way possible
4 - To have a bloody good time
Now you can't argue with that philosophy can you now.
So where does the name come from, and the slightly different spelling. Ah, that would be the tale of the mythical  Moddey Doo black dog, the mysterious dog that haunts Peel Castle.


So there you go, from black cats, to black dogs thanks to KNOXVILLE GIRL . Now if I can just find the escaped wallaby and a manx fairy I'd have the full set.

What's going on? You live in a mad part of the world.

Cheers for the link. I've heard you're the mystery blogger, but I think I know who you are. Friend of a friend. Lost In Japan, but be back soon. The Dhoo's are gonna love this.

Well I came to tell you I had left a comment for you, my cohort in bloggin crime, on Knox's and I see this. Love it and G.'s great illustration. This is great. We are a pond away and still kickin' up dirt.

I would have liked to understand your post, but I sank with my English so limited, damage, I try the translation of master Google, but it is completely delusional.

wow that was some tale!!

That is just brilliant! What a surprising coincidence:)

Great post, and thanks for the warning about the awards, i will be more careful.

My favourite Manx Legend. The bike club used to ride out on sundays. Do they still do that?

The Black Dog is a common feature in Welsh folklore - and I have even used it in my novel.

Black dogs myths are quite common around the world. Like the black cat myths you featured previously, each has a basic deviation. Ultimately it is one tale adopted to suit the needs of the area, ie "Black Dog" uses the Manx form to distinguish it from other such tales. The Hound Of The Baskervilles, yes, is simply another recounting of the familiar story we see around the world.

Interesting to note the various spelling. A good document for the student and collector of such myths.

Oh, I never knew this tale! How delightful, and wonderfully spooky.

I love the illustration, very atmospheric. Um, I HAVE captured a fairy, well, take a peek 'cos I'm sure at a loss as to how to explain it (cue scary music)..

Hooooooowwwwlllll!
Come visit Knoxville!
Or maybe I'll hijack Virginia and me and my tattoos will come and check out the Dhoos. I don't ride, but WTH.
Marie tried to explain this to me too. You tell a good tale.

Maybe I should go on one of those London night walks to hear the tales of old London. Although I wonder how much the fog and gin paid a part. I mean whhat is the origin of mad dogs and englishmen? Good black dog story though.

Dang, I wish he would have told what happened out there, I was on the edge of my seat!
Love the sketch of Moddey Doo, it doesn't make him look all that threatening!
It sure is a small world isn't it?!

Thanks for the full low-down. I'd never heard the full story before. Nice image by Gary as well. The Moddy Dhoo are a great bunch of people and do a hell of a lot for others.

We're keeping our eyes open for the wallaby and manx fairy..

Great tale! It made me go all goose bumpy!

This meeting in Knoxville just shows its a small world!

babooshka, its no wonder you have so many visitors! At first, I thought it was simply the appeal of your cute name, Babooshka but now I am convinced its your eloquent writing and clever humor. I need to have a clone of you sitting next to my desk to entertain me haha.