A COLOURFUL PARTY IN THE PARK 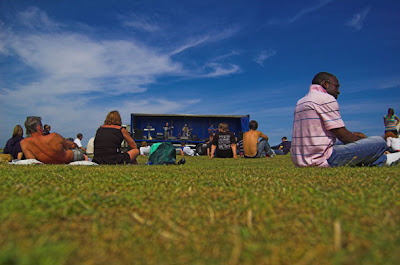 For ABC Wednesday I posted this shot as a monochrome, a black and white shot. This was the original image, before I desaturated the colour. Which though is the better image?

The black and white one is a classic ground eye shot. I said this before but it's the kind you see in
Sunday supplements and music mags. You tend to notice that certain shots are favoured for different concepts and mediums. This version is in it's natural state, which is already quite bright and rich in colour. You wouldn't see this image though. If this image was used the colours would all be bumped up, saturated, very artificial. No individual colours would be picked out the image it would be saturated en mass. The grass would have a yellow hue, the sky a richer blue and certainly the guy with the pale pink shirt would find he was now sporting a hot pink shirt. To me this already has a vivid enough hue anyway, but that's' just the way it is. Take a look at your Sunday supplements this weekend. None of the colours will be natural.

So on a personal note what do you prefer? No right or wrong answer, it's personal taste. It's just to give you an idea of how one image can have two identities and how the market place uses them. I haven't even commissioned the colour one, it's gathering virtual dust, just the black and white which I put for tender. It's sells and I know it would always outsell the colour if I chose to offer for use.

It's been a crap day here. Confined indoors due to the weather. The internet has been a nightmare again, so my absence may have been noted. Apologises for negelecting blogger duties. Gary is in the zone at the moment. Sarah Palin, I have news for you. You are a godsend to the political cartoonist! I think he will have to tone down the sketches he has at the moment. It must be amusing to our American Friends out there, that in the backwater of nowhere known as Ramsey, Isle of Man, your electioneering is followed so closely, it pays ours bills.
Posted by Jane Hards Photography at Saturday, September 06, 2008

You have nice photos @ your blog.

This is such a busy image with such a wide foreground. I do like the blurry grass at the beginning of the B&W and had not even noticed the bare backs in the coloured version until you pointed them out.

It is not an image I would even have considered for desaturating (new concept for moi) because of the multitude of elements within it. For that reason alone, I think that the colour version works better.

Well I think it's pretty funny that the duffers are offering opinions to the professional, but let me just bust up in here and say my piece-Ha. I am going with the BW. Timeless is a good word B. BTW, I would dearly love to see Gary's latest work on Debbie Reynolds, I mean Sarah Palin. Guess my blog visits will drop to zero on that comment. I think I have been hanging around this blog too long. I am starting to give my opinion at the drop of a hat. Not that I wasn't famous for that already! I loved your Skywatch photo yesterday but there were sooooo many comments I decided to stick mine in here. Cheers! V

The very low angle and the people sitting on the foreground make a nice lead to the stage at the background. Well calculated and nice composition, B.

I will preface this with--I like B&W, I even do Scratch Art which is B&W but I do like your pic in color. It just make me feel good. MB

I am very interested in your Ramsey photos as I have a great friend who lives in a converted warehouse/bar/something-or-other overlooking the river. We visited her some years ago and she drove us all over the island.We loved it. But that was in a good summer!

love the DoF in this scene ...

I think I prefer the B&W too. Maybe that's because I'm too culturally inculcated (I think that's a word!) and have read too many Sunday supplements and so the B&W is more familiar.

I hope your internet gremlins sort themselves out soon!

I prefer the color...I find it draws my eye in more deeply into the photo. The B&W was nice, but I found it less interesting.

It is a nice colour shot... and that is, frankly, it.
You are right, the mono will last. See how much better the foreground shows up.
I am hoping to get Monochrome Monday running but I have to set out the 'rules' in the post.

I can't decide. The colour one is so clear. The mono so classic. The mono, it will last forever. I think?

You took a nice and different photo.

Personally, I prefer the color because I love the blue of the sky. But I understand why the b&w would be considered more of a classic.

Black and white images never date. It is classic image, either version

I'm a fan of b&w, but this is the version I prefer. I can feel the vibe and energy. Great shot!

Thanks for visiting Norwich Daily Photo and leaving your kind comments. Have a nice weekend!


joy
A Pinay In England
Your Love Coach
I, Woman

I think the color version is better, but the colors need tweaking.

It's on the magenta side, I think. Both the grass and sky have too much magenta.

As you say, they both have their charms. And they look 3D to me. How can that be? maybe I ought to cut back on the JD.
Did not mean to rhyme, sorry.

I love seeing the contrast between the two photos, but I'm a color girl all the way.

I don't see magenta. I see sharp green and blue.In fact there is no purple/magenta at all in the photo. I think your screen needs calibrating properly Kitty. Your white balance sounds out of whack.

I prefer this colour one to the black and white.It's clean and sharp.I prefer colour photos anyway. It's tac sharp and the colours are well balanced.

Photographers always say black and white don't they? I'd go with the colour. It has got a 3D effect. How do you get that. Yeah colour for me it's so prefect.

great angle and color! Who played at the concert?

I see and understand what you're saying about the B&W but I'm addicted to colour.
Intellectually it's BW all the way but, you know, I still would pick the colour..
Re. your comment of ages ago I'd love to look at your Nice photos if they're online...

Just because of the great color in the sky I would choose the color shot but I too love the monochrome for lots of shots.

For me the B&W without a doubt. It is the more powerful image.

By taking the photo from that angle the life we live gets a new perspective. Nice!

I think I prefer it in b/w. Interesting to see it both ways, however. Thanks.