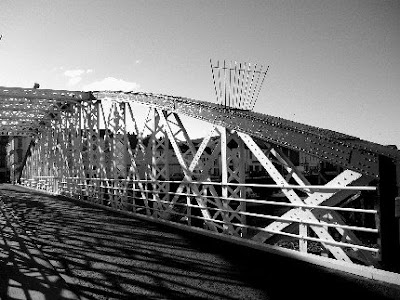 Not quite Sydney Harbour bridge, The Forth Bridge or San Fransico's Golden Gate Bridge is Ramsey's very own Swing Bridge. It's also as close to a cityscape as I can find on the Island. Don't forget we have no skyscrappers, and a much smaller population that run away when I point the camera in their direction.

Built in 1892 by the Cleveland Enginneering Company at a cost of £2o,325(what would that be in todays terms?) primarily to transport people to the other side of the harbour, to the newly built housing that had emerged around this time.

The bridge is still the main access route across the harbour. At certain times of the day the bridge is closed to cars and pedestrians when it is swung out to allow tall mast boats through. It was also featured in another British Film called The Martins, Staring Lee Evans and Kathy Burke. It's also going to feature heavily in this blog as I never get bored of photographing it.
Posted by Jane Hards Photography at Saturday, April 26, 2008

Lovely photo, and such a neat angle. I am just amazed at your talent every time I visit!

The angle and the shadows make that bridge look twice the size it really is. You are a very good photographer.

I love the crisscross of the shadows.

So different to yesterday. The shadows have created quite a complex pattern. Excellent result again.

Thanks for visiting me.
This is a wonderful photo! I like the lines and the shadows in it and that you show it in black and white.

Lol! Could you post a photo of the "running away population?" ;-)

I love bridges and this is a cool photo of what must be a cool bridge!

Interesting photo and history! It made Louis think of some of the lesser-known bridges across la Seine à Paris!

Nice photo, our bridges cross over small streams and really aren't considered bridges at all.

Great bridge photo. I would hazard a guess that 20K in 1892 would have to be a couple of million in today's money, maybe even more.

Hey that company is here! My hubby worked there as an apprentice many years ago!

So, am I seriously colour-blind, or have they had their paint-brushes out? It was lovely red lead paint a few weeks ago.

Or maybe someone's been a little naughty with Photoshop? Still a nice pic though.

No, I'm just crazy, it's monochrome of course. It's the sky that does it, my brain still reads that as blue; weird.

It's still red. photoshop is really only useful as a cropping tool to me. If you notice I shoot both colour and black and white images. Had to be B&W this one to show off the criss cross shadows. Still think a black and white shot beats a colour shot for some subjects.

I think I've only seen one of these. Very interesting concept. But not fun to still want to get across, when it's time for car traffic to stop. ,-)