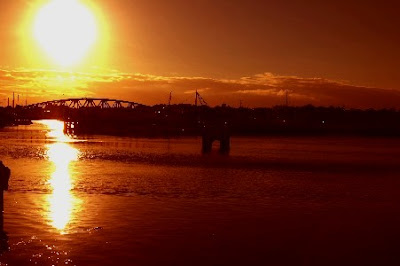 Later with the post tonight, because I heard it was going to be dry all day. This meant I got the chance to do some early evening shooting. It's Ramsey Harbour Swing Bridge in the distance, under one of the best sunsets we've had for a while. Definately feels like summer's on it's way.

If anyone has seen the film the Martins with Kathy Burke and Lee evans you may have noticed the bridge in the background of a key scene in the film. Just behind me out of shot is Ramsey's one only nightclub called Nightlife( and other things). This is where Patrick Swayze did his "dirty dancing" when he was filming "Keeping Mom"over here. Zac Efron was recenty over here filimg aswell, and yes he was mobbed by lots of young girls when he went into a coffee shop. He even had to have a police escort out the backdoor of a local coffee shop.

It's so good to see you are still working on both blogs.

Can't tell you how beautiful this is, it's just gorgeous.You have this sussed now don't you.

It is a beautiful photograph.
You are really showing off the Island to the world. Well done.

You show the world what they are missing.I love your photos.

wow, look how big that sun is?
great shot!