ABC - N IS FOR NIARBYL 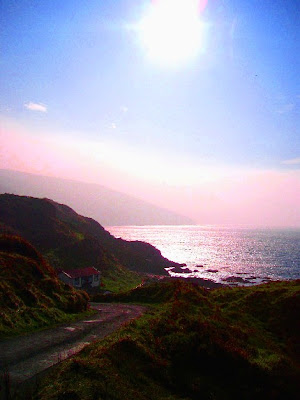 Niarbyl bay is situated along the West Coast of the Island. You may think it looks slightly familiar, especially the little cottage mid left of the image. If you've seen a film called "Waking Ned Devine"you've indeed seen this pretty little bay and cottage previously. Both were featured in the film. A lot of the films success was attributed to it's beautiful location, The Isle of Man. Niarbyl though has to take the biggest bow for the part it played as the stunning backdrop for key scenes.

Now owned by Manx National Heritage ,Niarbyl is noted as an important geological area. Visitors can find out more about the geology and history at the NIARBYL CAFE AND VISITOR CENTRE
which is part of the STORY OF MANN

So N today is for Niarbyl. If you'd like to play along see MRS NESBITT'S PLACE
Posted by Jane Hards Photography at Wednesday, April 23, 2008

Magnific photo, the pink of the sun in the water is a beautiful effect

I can well understand the success of both film an the Isle of Man.

On my visiting short-list.

your landscape is beautiful, especially with this light. bravo to the theme of Wednesday

Wonderful photograph! Hope the weather is as good as this when we come over....not long to go now!

A fantastic place with great colours on this photo.

What a beautiful N post. I want to be there and see it with my own eyes!!

You capture your island so well in your blog, Babooshka, it's always a pleasure to stop by. Thank you.

Forgot to mention, loved the film, "Waking Ned Devine!" Of course, what is there not to like about a film like that.

Don't know the film and didn't know the name, just looked the location up on my 1995 road atlas and found it near Dalby.

A beautiful place and a great shot!
Good N post.

Gerald you are right, near Dalby It is, another place for me to capture sometime.

Love your photo. What a beautiful place.

What a beautiful photo! I love those colors in the sky.

The colours are fabulous. Such scenery. What a place. Super photo.

What a beautiful spot!

I chose N is for nummies. What's that you say? Click here to find out. – Margy

Very nice photo and a very nice place too. Wonderful colors and I really love it:) Well done.

Niarbyl sounds kind of foreign in a strange way, but it's really beautiful. Reminds me of some of the beaches along the Welsh coast which are really pretty (on a good day lol)
Glad to hear I persuaded you to listen to Ida, she's pretty great really.
P.S. I've never heard of "Waking Ned Devine" - what's it about, I love films as you probably already know!
Ciao with love

I watched Waking Ned Devine couple years ago and awed with its landscape. Thank you for remind me this beautiful place. And you captured beautiful picture.

I didn't see the movie but your photo is awesome!
My ABC's are up~
Neva ABC 1
Neva abc2

WOW! It truly IS a lovely spot.

What a fantastic pic today. How lovely.

I'm getting round to everyone a little slower than usual. So, in the meantime,yet again, many thanks, for all your kind comments.

I haven't seen the movie, but I will put it on my list to rent because I would love to see more of this location.

Thank you for your comment! Open air markets are my kind of thing, also. I'm sorry I missed the one this last Sunday.

This is a beautiful photo. I need to see the movie, now!

What a beautiful, watercolour-like image!

I'd love to live on an island… Your picture is amazing.