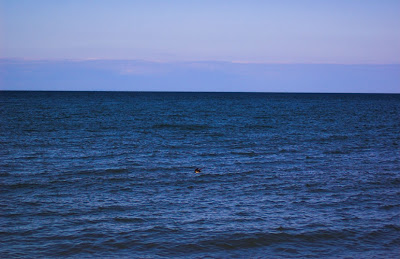 I usually post a black and white after Fiday Skywatch but for a change went with colour but something a little different. Often you hear Photogrpahers/Artists use a phrase called "rule of thirds." We are talking photography rule of thirds, not scuba diving, just to add to the confusion which is something very different indeed.


The rule of thirds is a compositional rule of thumb (mainly used) in photography and a range of other visual arts such as painting and design. What is it though? The rule states that an image can be divided into nine equal parts by two equally-spaced horizontal lines and two equally-spaced vertical lines. Think of the grid you would draw for the game of noughts and crosses. The four points formed by the intersections of these lines can be used to align features in the photograph. Proponents of this technique claim that aligning a photograph with these points creates more tension, energy and interest in the photo than simply centering the feature would. I didn't say I agree, I just said that is the supposed rule.


Rule of thirds in photography is considered by many to make images more aesthetically pleasing and professional-looking. The rule of thirds can be applied by lining up subjects with the guiding lines, placing the horizon on the top or bottom line instead of the center, or allowing linear features in the photograph to flow from section to section.


Personally to me rule of thirds should be used as a guideline and not the norm. I chose the most basic image I had to demonstrate the thirds rule, and the horizon is the most quoted for it's use.
Take a look at my photography and you will note the times I subscribe to the rule, mainly sunsets, otherwise no I don't. Why? I would take photographs that would bore me and if I'm bored buyers are bored. Get your technique right but think for yourselves, be creative. This image, for demonstration purposes only, was taken on the beach Ramsey, looking across to England, which is the hazy land mass you see.
Posted by Jane Hards Photography at Saturday, November 15, 2008

LB, attempt a comment again. Blogger whatsup! I get it. I get your arty photos better though. You da (wo)man.

Nice lesson. I tend to use it when photographing sunsets, otherwise I tend to take the photo and think about how it looks in the frame and wether I like it. I think these rules are a good guide but you've got to do what works for you.

I hope Gary got his art work in on time and that Saturday is less stressful! :)

Love your sky watch photo and love the photo above (this post) I sometimes think in the rule of thirds cant recall where I first heard it, but it works.
hugs Laura

Cheers B for the lesson. how do you get those bikes?

115 comments on the post below! It is a drop dead gorgeous photo! The tips are wasted on me, no camera skills. Happy to view your excellence.

Would you post a Laxey one again. Many Thanks, Lisa.

I hear ya sistah. I try but often Iphoto cropping has to compensate for my mistakes. HEy , whatever it takes, right?
V
PS Loverly

Thanks but it won't help. I chop the heads off everyone. So many cool photos.

I think I understand this. AronaeveryDay has good examples as does BitingMidge.

I look at the photo and my eyes love it or not...

Your photo is nice...

I am just so impressed by the number of your followers. It's an amazing amount.

We see so many potentially excellent pictures ruined by neglect of this ancient rule.
It works but there are times when it is best set aside. It is knowing when that makes the photographer.

You're right, the rule makes sense and is helpful, but shouldn't always be rigidly applied. This particular photo has very strong, horizontal lines, but does it "make" the photo? Anyone's guess.

Good example of the rule, but I fear it's wasted on your readers as are many of your tips. You can not teach some people.

Hey, do I see a photography book in progress here? If not you should consider it. Although there are lots of books out there, and more every day, I think there is still a need for an example laden book aimed at helping casual snappers make casual snaps more interesing and visually appealing.

I just recently started reading your blog, I have had a curiosity in photography for some time now. But it's never been my biggest curiosity. I've been having some troubles deciding what to go to school for. My heart lies in music, but criminal justice is more logical. And then I get the urge to take a picture of a wonderous tree that towers over a long road and makes me pull over to the side and just gauk at it... because I simply don't have my camera on me. It's making me want to have an excuse to always take pictures. I can understand I can do it for a hobby. But I'm a huge fan of art and really want to do something that awes people.

So I guess my question is... do you think it would be a good choice? Possibly something that would suffice both my heart and logic? I go back and forth with music and being a cop, maybe something completely different would be best? I ask for you help because you know quite a bit about photography, and I know nothing. :)

I think this about the worst photo I've seen here - which goes to show (as i'm sure you'd agree) the rule is great but strict adherence to the rule does not of itself produce a great photograph - I thought the "swallow" was a small boat bobbing on the water.

I suspect you rarely actually think about the rule when taking shots but employ them instinctively and only analyse them afterwards.

Gerald, You got it in one. This is my point. This is the most bland boring uninteresting photo I have or ever will post on an aesthetic level. On a technical level it is the best. Which proves only use the rule of thirds when it applies, not religiously. I tried to find the most bland shot to demonstrate the rule, and why you shouldn't always stick to rules. Glad you got it.

I have heard the "rule of thirds" mentioned but not being a photographer by trade or schooling I didn't really understand completely what it meant. I had an inkling and for the most part was correct. Your post has explained this rule very well and thanks for the education. Also, thanks for the excellent photos on your blog! I enjoy visiting here often!

I've grown so accustomed to the rule of thirds composition since that is what is most often applied -- that when someone breaks the rule or uses asymmetrical composition, I find it tickles my brain more because it is not expected. Funny how we get used to things. I noticed a lot of photographers are placing subjects square in the center of the frame now -- in advertising, a lot - breaking from the off-center placement that seemed to be the rule for so long.

Great post as always, Babooshka. I would love to pick your brain for other photography lessons.

I observe the rule of thirds effectively for "some" shots. My camera has grid lines that can be turned on; I find it really useful as a guide, even if only to get horizons straight.

I love it. Clean and clear. The bird makes it even better.

I miss the ocean

Thank you for this reminder of rules. I think we all can agree rules are meant to be broken at times.

My dad taught me this one when I was young, and sometimes I still forget when trying to frame a photo "just right." I'm trying to get better at that, but having never taken photography classes or really claimed to be any sort of expert in the area, I forget. Thanks for the reminder!