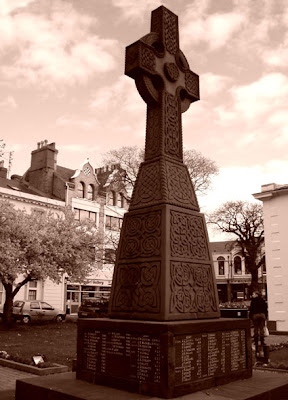 My World - Ramsey War Memorial
This is the Ramsey War Memorial Cross that stands next to the Police Station and opposite the Post Office. Nestled in a tranquil square surrounded by Cherry Blossom trees, small bordered lawns and benches to sit a while and pay tribute. The cross bears the names of the fallen service men from the Isle Of Man of the World Wars. Note the design of the cross and the intricate detailing. This is down to our Celtic and Manx heritage which creates many varied styles on a Celtic theme.

I chose to show for my world today, the War Memorial, as it is Armistice Day. Poppies will be laid around the foot of the Memorial and a service will be held. As the island is still quite private, and I did not wish to intrude upon the service, I have chosen a spring photo, with the Cherry Blossom in bloom and highlighted with a sepia tone which seemed best suited to the image. Later this week I will photograph the Memorial with the poppies if they are still there, hopefully.

Armistice Day is the anniversary of the symbolic end of World War I on 11 November 1918. It commemorates the armistice signed between the Allies and Germany at Compiègne, France, for the cessation of hostilities on the Western Front, which took effect at eleven o'clock in the morning - the "eleventh hour of the eleventh day of the eleventh month." While this official date to mark the end of the war reflects the ceasefire on the Western Front, hostilities continued in other regions, especially across the former Russian Empire and in parts of the old Ottoman Empire. In the United States, Armistice Day was renamed to Veterans Day in 1954.

Ramsey, Isle of Man maybe small but the people of the island played their part and gave their lives too in the World Wars and in subsequent and ongoing wars and the War Memorial will always be the focal point in Ramsey On Armistice Day.

For more my entries click MY WORLD and thank the skywatch gang once again for another inspired idea.
Posted by Jane Hards Photography at Tuesday, November 11, 2008

Have a good night...

Wonderful idea for Our World Tuesday... It gave me shivers... A wonderful tribute and a wonderful Cross, one of the nicest I've ever seen!

beautiful photo!
have a nice week!!

What a beautiful cross full of intricate details I see.


This is a very fitting post for what we call over here veteran's day.

It's good to commemorate the dead and that's why I wrote my post of today. My father was a sailor during WW II which was a difficult time. He saw many ships being torpedoed.
Don't feel like an intruder, please. I just wrote what I felt. Most of my posts are more informative and I like to show photos. I am happy with so many blogging friends.

Beautiful monument and very appropriate to post this time of year. Thanks for sharing!

Beautiful and very fitting tribute!
I love the intricate pattern of the Celtic design.

Babboshaka: Certainly a sobering look at the world we live in when they didn't learn from the first world war.

That is an awesome shot, and a fitting tribute to those who served. Great job!

Great photo, and tribute to the fallen and veterans in general. Thanks for sharing & have a great week.

The "sturdy" (?) cross is a fitting remembrace and tribute to the those who perished in the war.

I would not have remembered that today is the Armistice Day. It's been quite a while since I had my history lesson. THanks for sharing, Babooshka.

Excellent post! Thank you for sharing. Awesome tribute and photo!

The "sturdy" (?) cross is a fitting remembrace and tribute to the those who perished in the war.

I would not have remembered that today is the Armistice Day if it were not for your post. It's been quite a while since I had my history lesson. THanks for sharing, Babooshka.

What a coincidence that I went to the memorial yesterday to take a shot of all the poppies and wreaths that were laid there on Sunday during the service and I took it from the exact same spot and posted it on my site. I left mine the original colour but I like yours very much in sepia tone........
......Being part of the Ramsey Lifeboat Crew we always attend the Remembrance Day Service and this was my fifth time and my step-daughters first. It was cold, windy and at times wet but it was pleasing to see a very large crowd to come and pay their respects and remember those who gave their lives so we can live as we do. We will remember them........Thank you for a wonderful thoughtful post.

Lovely post, lovely photo. I knew so little about your Isle before joining SkyWatch and MyWorld, and I am so pleased to be learning more.

B. This is a stunning image. The sepia is perfect. Thanks for the information regarding this day in your slice of the world.
V

I love the detail in this picture. You've framed the shot well, and given us some incredible historical background to accompany it. Very fitting post.

This is such a wonderful tribute to those people who lost their lives during the war. Interesting post!~

Posted mine, HERE. Have a great day! And thanks for the virtual travel;)

I'm embarrassed to say I was not familiar with that history. Now I know. I was at a Battle of the Bulge memorial earlier this summer in Belgium: the Henri Chapelle cemetery there. But that was WWII.

Nailed it again, sentiment and photo.

The cross is an amazing monument. Your picture captured it beautifully.
Thanks for sharing!

nice photo, the sepia is perfect. Your posts really bring your pics to life as well. good job!

God bless you for your remeberings

Hi Bab, this is a nice post for veterans day (I too am a vet).
I think I have a picture of that unless the rain started hard the day we were there.
Happy RtU! Today I am at
http://jimmiehov.blogspot.com/
which is my regular blog
..

Always interesting to see war memorials and how different societies remember their veterans and fallen soldiers. Here in the US south and east the majority are dedicated originally to the soldiers of the US Civil War in the 1860s and most feature a single solder standing with a rifle at his side, or maybe and officer on horseback, with a quote or saying etched onto the base and maybe the names of units. The memorials for later wars seem to be more simple in nature - a wall covered in names with maybe a flame burning in memorial.

Lovely tribute to the soldiers.

That's a beautiful memorial and a great post for Armistice Day.

Gorgeous cross - intricate stone work like that is just amazing & I love the geometric variety of Celtic designs. Very effective photo for LEST WE FORGET, esp. with the light blossoms on the trees. Wonderful.

The statue stands out from the background with such a strong presence.

Very time appropriate post. I like that you did it in black and white with the sepia tone to it. I expected to see an old car in the background. :-) Very nice!

a reminder of what hatred can do

Great tribute and the sepia was the best choice for this picture - well done!

Wonderful tribute and wonderful photo. I like the sepia tones. It gives it an ancient and somber mood.

The war to end all wars! It seems since then they have become more frequent still and much nastier.
Man's inhumanity to man is beyond my comprehension.
I like your treatment of the photo,the monochromatic grey of mourning.

great sepia shot
i love the carvings on this memorial, brilliant capture

The photo is awesome, the sepia colours fit it very well. I didn't know about the poppies as a symbol (it's not used in Germany), I first learned about it on Doctor Who of all things.

This is wonderful in sepia. Maybe in your next post of this cross you can educate us on the origins of the celtic cross. It is rather beautiful.

Wonderful shot and post! We honor all our Vets today, the living and the dead. God bless them all.

BEAUTIFUL! You have chosen the right colours!

I love the patterns on the cross and you gave it just the right tone to it making it scary but serious at the same time :)

A very nice tribute. It was cold and wet but we paid our respects. Good to see you put Ramsey on the world map with really pretty photographs. Are you a reporter?

A very nice tribute. It was cold and wet but we paid our respects. Good to see you put Ramsey on the world map with really pretty photographs. Are you a reporter?

It is very good to remember those who fought to preserve our freedoms.

That Celtic cross is a fine memorial.

I watched the celebration in London with the Queen and male family members.

That is beautiful shot.

Wonderful tribute and a interesting post from your world. Very nice photo too!

Great capture and informative post!
Thanks for sharing, Babooshka.

A perfect tribute to those who did not return and gave their lived for us!!

What a beautiful cross that is. Interesting details you provided, and so appropriate for today. Thank you.

A wonderful and well deserved tribute! Thank you to all from the Isle of Man who served! It's a beautiful cross and I love the celtic designs....always fascinating to look at.

a stunning image and the commentary is perfect

Thanks for a magical image and fine words - not unlike my own intention for my humble post of the day.
Yours: Simple, Short, Perfect.
Aloha from Waikiki-

We are on the same page today, friend. This is a very beautiful cross, an apt tribute to the sacrifice of others. God bless.

This is a very nice War Memorial post and I love what you did w/ your photo! It looks beautiful

I love this photo. So much detail and such a beautiful cross.

That is a cool photo.

It is Vetran's day in our country.

I had to make the photo larger so that I could see the Celtic designs a little better. I have always loved that style. (I even have a bunch of needlework patterns based on designs from the Book of Kells.)

It's an elegant monument.

Detailed, both the photo and input. War is always a sad memory for many and too bad, for those who died only a statue remains for them without them able to see it.

this is a great tribute- so informative & respectful.

Your sepia tone interpretation is nice for this memorial.

This is a beautiful cross. I love Celtic styled crosses, and that's what this one looks like. Interesting colour you chose for this image...any particular symbolism behind it?