A ROCK AND A HARD PLACE 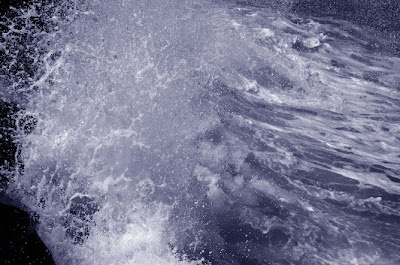 The sea is normally calmer than this around Ramsey Promenade, but today it was a on the choppy side. I took a few just for stock/wallpaper and thought I'd use one for a fellow blogger. It's been a tough week for a few bloggers out there for one reason and another, but one especially has had it just that bit harder than most. Being caught between a rock and a hard place is just about how her emotions are at the moment, and like the sea today awash with the blues. No names, no pact drill, just to say it's rough at the moment, but the the tide will turn around and the way to blue, will be bryter later(intentional spelling, re Nick Drake.)

Going off at a complete tangent about older posts. When I put a piece together I do my resaearch. One of my earliest posts featured a piece of artwork that I could have been graffiti could have been artwork. I posted the pic and asked the question which did the reader think it was. I drew a blank on the image, which has subsequently been painted over and put the post to bed. Thanks to MANNANANS CLOAK , I now know about the piece in question. It was indeed artwork. Here's the messgae I received.


"Anyway the picture in question was taken in Douglas of a wall painting which now you say has sadly been painted over. Great piccie by the way as they always, are but I know the artist, Well not so much know the artist as my wife knows her. G, my wife is 99.9% certain that it was painted by her friend Sheena Graham-George who used to be a resident of the island. In fact she lived in Ramsey off North Shore Road but left to live in the Orkneys a few years back. G got to know Sheena as when we first came to live in this fantastic place she didn't work and instead went to art classes where Sheena was the teacher. Anyway thought you'd like to know.....Cheers"

So thank you MANNANANS CLOAK for taking the time and trouble to let me know about this. It had bugged me that no one could even allude to who had created the work. I will try and follow this lead up aswell as I do have another image from the same place. At least it's now been documented by myself and hopefully others out there.

Have you ever had a post that someone has contacted you about to fill in the blanks for you?
Posted by Jane Hards Photography at Saturday, June 14, 2008

Today I will reach 5000 viewers. There is a hit counter, top right of the blog. If you are that 5000th viewer can you let me know, so I can link you next post. Cheers.

Mmmm, I could have been famous if I had waited a few minutes!

I have had input on some posts, although I couldn't tell which ones at the moment.

love the waves in this picture!
thanks for coming to My Photoblog

Your photo and text today truly indeed sum up the week for several! To use a different metaphor than yours, the wheel always turns.

It was interesting to read about how the blank was filled in for you. Readers did that for "Louis" at his "ABC Wednesday - Q" post. It's nice how we bloggers, thousands of miles apart, many of us never to meet each other in person, have formed a community, or even family.

"Louis" thanks you for your kind comments about his s H a K y S h O t. For this next "ABC Wednesday", stop by for "Visions from Hell!"

I don´t have Bryter Layter, but Pink Moon is one excellent album.

What an outstanding and powerful post of this wave for sure.

Nice pictures, thanks for visiting my blog, I will be back. I am featuring pics from my recent trip to Scotland and England for the next while.

Yes from time to time I do get blanks filled on - I won't quote any examples right now as I'm busy catching up on visiting blogs.

A bicycle wheel has just lolloped across the road into my hedge. I heard it and looked up to see two youths walking down the road - one seems to have a tyre in his hand.

I'm NOT going to rush out to investigate though.

"Louis" back again; number 5019. "Louis" just checked his San Francisco Bay Daily Photo. He has had 4,607 visitors. "Louis" thanks all of you who visit Babooshka snd also frequently stop by to say 'hi' to "Louis"!

I just got up this morning on the west coast of N America, checked the blog and missed by a long way at 5028

I love the crashing waves of a rough sea. They are so dramatic.

Glad I've been of help. Sheena did do other paintings of which I'm certain but those were gone over quite a while ago with the building of apartments on the prom, at Douglas....Crashing waves....I just love them. Well I would wouldn't I being a lifeboat man but your image is great. I would never have thought just to focus on the water itself....Brilliant keep up the good work and many thanks for your posting on my site much appreciated....

TY for the thought.
You hit it spot on.
But nothing you have recently posted has upset me, I'm just glad of your support.

Enjoy the remainder of the w/e!
Love
Blue

I like the water hitting the rock. I get emails from people that lived in Terrell or grew up here about buildings I have posted pictures of.

great so wild and dangerous

yes, it's so cool when someone takes the trouble to fill in the gaps. We have had that a few times on Port Elizabeth Daily Photo. Nice pic.