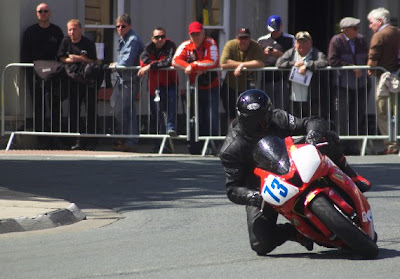 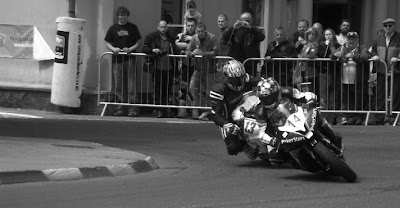 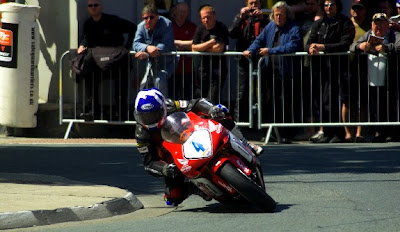 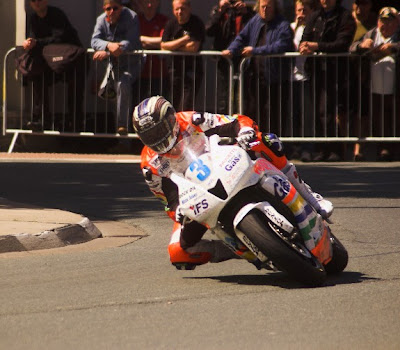 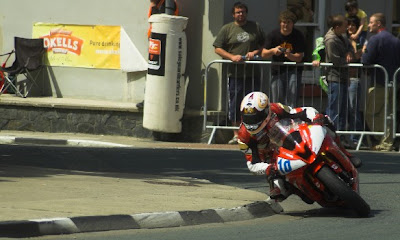 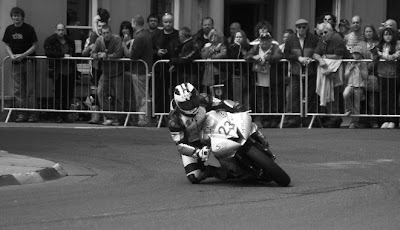 ABC Wednesday had to be T for TT. Same as post yesterday, a bunch of images , no particular. order. As I've before, said posts all hit and run this week, got to be out and about.

This is the Monday Race, The Supersport 1. Quick who's who in the pics. 73 is local Guy Peter Hounsell who finsihed 42. Next is Chris palmer 14 and Adrian Archibald 13. They finished in this order in 11 and 12TH place respectively. Next Keith Amor, No. 4 who finished third. Following that is John McGuinness No 3 who finshed second. Steve plater is the next image, rider 1o and the eventual winner( Bruce Anstey was disqualified.) Final pic is Michael Dunlop 23 who finished
a respectable 1oth.

No racing today, but it was Ramsey Day. These pics may have to wait until next week as there is more racing tomorrow, the sidecars Pierre( I couldn't do the sat race). Ramsey Day is a fun day of stalls, sprint racing, stunts and kiddies entertainment. A bit of light relief and a day off for the riders. Not the photographers though.

Oh yes, have to say thanks to the magazine photographer who tried to get me into the media enclosure to have better access. He argued the point that I was actually the only one with Ramsey Daily Photo on the shirt and a local. Typical Isle of Man mentality, the answer was no. Laxey Lass, I agree with you about the courier, but it's international magazines that have approached me, never the island, and yes it infuriates me.

I'll get a T.shirt pic sorted at some point. Time for bed.

Like to join ABC Wednesday? Please got to this link, MRS NESBITT'S PLACE
Mrs Nesbitt is the host for ABC Wednesday, where you can find details for joining, her own ABC shot to comment on and a list of fellow bloggers who are playing today, who would also appreciate your comments.

More great pics. That #13 looks huge on his bike.

yikes! their knees look like they could be ruined forever!
Mine is up here and here.

I like your shots very much Babooshka. From the figures you have posted these bikes are not slouches.

"Louis" has been enjoying the "TT" photos!

At SF Bay Daily, "Louis" continued the theme of his "S" post with the "T" post. HERE is how he did it.

Thanks Babooshka. Lovely photos again, and I look forward to the sidecar ones. Someone mentioned that fence in a previous comment, but I wonder how effective the padding around the lamppost can be...
Please look after yourself - it is a very dangerous sport indeed.

Those same names - different order.
It is noticeable that TT racers do less well on short circuits - but drop them into the Island and watch out.
Great stuff.

an interesting series of posts for motorbike raising

Wow!
What a suprise, the TT - LOL!
Having teasingly said that terrific action shots - I can almost hear the raor of the bikes.

Just given me my fix for the day. Sidecars tomorrow? Ooo, yes please!!!

You know what they say about prophets in their own land - sames goes for photographers.

Great action photos! T is for too close to tipping over!

And here we have the great and famous Isle of Man Grand Prix ...

How can they lean over so far without falling?!!

Terrific TT photographs. How do they not come off and how do you photograph them so expertly?

Did you meet Mrs Nesbitt??Great photos from TT races.

Come and visit my Tree House.

It must be very difficult to ride like that and to lean over so deep. It's amazing. Good photos! Thanks for your visit.

No surprise at your topic! Have you run into Mrs. Nesbitt and John who are enjoying the races for their anniversary trip? And by the way, whatever does TT stand for?

Love your post today!! Great photos and information. What kind of credentials have to be shown to get into the media enclosure? After all, you are Ramsey Daily Photo!!

Thanks for your kind welcome to ABC Wed. What fabulous action photos....I can almost hear the bikes! My fave is the 1st picture, the dude in all-black leathers....very intimidating!

A break for some tomorrow, but no rest for the weary, Boo....it's obvious you are doing a bang-up job out there on the beat by the great pix we're getting to see. Yep, this T (or TT) day is definitely made for you there at the big event. Thanks for your racy posts! :)