ABC WEDNESDAY - U IS FOR THE UBIQUITOUS, UNIVERSAL, UNDISPUTED UP, UP AND AWAY TT SHOT. 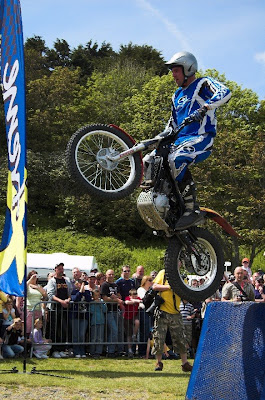 Hellllllllloooo! Well what's going on here then? After yesterdays down in the dumps post I decided to have a laptop, camera, phone free day and look what happened accoording to the comments box. Tigger found his mojo and went looing for Pooh, bar stewards were barred from grinding, fans were excavated in Cairo, Sally strayed from the darkside of bantering, Southampton joined the party and Manannan was found in Ramsey. Bascially trying to say thanks for all the positve comments. Back on track.

The shot is from Ramsey Day. It's the biker I posted on skywatch with another stunt from his bag of tricks. This time he was front facing and if you take a closer look you can see the official photographers didn't get this one. Sometimes being on the oustside looking in has it's advantages.

Normal service then has been resumed, and I will be blogstopping in the morning. Will be pointing you in the direction of another website from, get this Ramsey. Had a peek after they stopped by and drew my attention to the site. It looks fabulous and it's so nice to have the company of another Isle of Man blogger. Really great to see another's Ramsey bits and pieces which I want to do in depth so look out for thursdays post.

Barker news. The cartoon strip is going great guns. We are on a mission here to generate feedback so here it is. If anyone out there goes to this link BARKER GALLERY BBC
and drops a positive word on the comments page, the contact bit, it would be much appreciated.
As for the football caricatures they were for the European Championship Berlin Underground/Metro, but there are legal issues with personal copyyright image so may not be able to be used, but can be sold as private prints. Far more complex than photography licensing.

Like to join ABC Wednesday? Please got to this link, MRS NESBITT'S PLACE
Mrs Nesbitt is the host for ABC Wednesday, where you can find details for joining, her own ABC shot to comment on and a list of fellow bloggers who are playing today, who would also appreciate your comments.
Posted by Jane Hards Photography at Wednesday, June 11, 2008

"Louis" is very happy to read that Babooshka is in better spirits today! "Louis" is, too! He just got off the phone with Mme. la Vache, who arrived safely in Tokyo and was at her mother's home.

Oh, and by the way, great photo - as we always know we'll get from Babooshka! ;-)

He is a real dare devil. Great action.

Great photo today Babooshka, caught the chap just right unlike myself and my wife who couldn't be bothered to wait for him to come on so carried on walking and by the time he was performing his tricks we were walking back home along the promenade. Still we had a great day, a brilliant TT and fantastic weather.......Been going through some of your old stuff and love the photos as well as the comments and thanks to you I've also today discovered Birmingham Daily photo which is such a coincidence as we lived there up until seven years ago when we had the chance to come and live on this brilliant island. Anyway you'll be hearing more from me in the future. Excellent work, keep it up......

You got the most "U" adjectives to describe your photo! Glad you are doing better today!

I think I missed your difficulties yesterday as I was out late for graduation and didn't get around much. This shot is great. Don't you love catching anything in mid-air?

bravo to the champion (and photographer). I was no sense of balance (I fall, if I loose the handlebars of my bike), I am always impressed by these flying fools.

Is bantering the darkside?! Ooer.
Anyway, great photo. I'd show my son, but it would give him ideas and him on a motorbike isn't something I'm looking forward to!

I would guess we are not the only two who will use ubiquitous as a modifier today. Yep, you nailed him good, Babooshka. Thanks for all the great action shots!

I missed the shot. I got half a blurred wheel. Best one I've seen of the day by anyone. Wifey and I been coming to the TT for 30 yrs. Good blog.

I'm sure I read somewhere a discussion about the mis-use of the word ubiquitous but as I type this I remember it wasn't ubiquitous but eponymous - o what the heck - I'm doing bikes for V next week - got to get them in somewhere!

I too, missed your post yesterday - don't know where the day went. Glad you are feeling better. I could also do with a bit of 'Up-ness'.

Brilliant photo! Absolutely great!
I'm another who missed yesterday's post, though I've read it now, and I'm glad you've Tiggered well. And you've found a local reader too! That just doesn't happen here. There have been one or two indications of readers within Ireland, but no-one ever comments. The photo you posted is excellent - very moody.

Thanks for your visit and your illustration of U.

WHOA! What a tremendous photo shot!
Thanks for coming by mine today!

Great shot! I can't imagine even tryng this.

Must be losing my marbles...thought I had left a comment! LOL!

We will vist Ramsey Day next year!

WOW! He is good!
Great choice:)

Utterly amazing that somebody could jump up like that! Great shot!

Glad you're up and running. This is an amazingly 'unusual' photo too.

What a great shot! And a wonderful U!

Recently visited Barker's site (Barker Bites Back, found it on your Purple Haze blogroll) and found the caricatures of Euro 08 players amuzing. Glad to hear you're in a better mood right now.
It may interest you to know that while trying to write this comment I made many spelling mistakes. Luckily I've erased them lol! I am such a hypocrit lol.
Ciao

U got "the" photo.
Great shot.

Excellent - your action shots are consistently brilliant. Do you ever have pictures where you've only got their back wheel or someone just walking into the picture, or all the other things that happen to us mere mortals all the time? lol!

Nice capture, you always do a great job :)

Missed your post from yesterday but I think we all go through that....glad you are back on track! I like your shot today....I am still figuring out how to catch those shots...is it the TV mode or the Av mode....need to remember when the shot presents itself!!!!
Mine is here.

Hi again...been slowly going through this great site this afternoon and I'd like to comment about a picyure taken in March Would have commented on that date but I'm not sure how your site works about getting messages bumped to the top if you get my meaning. Anyway the picture in question was taken in Douglas of a wall painting which now you say has sadly been painted over. Great piccie by the way as they always, are but I know the artist, Well not so much know the artist as my wife knows her. G, my wife is 99.9% certain that it was painted by her friend Sheena Graham-George who used to be a resident of the island. In fact she lived in Ramsey off North Shore Road but left to live in the Orkneys a few years back. G got to know Sheena as when we first came to live in this fantastic place she didn't work and instead went to art classes where Sheena was the teacher. Anyway thought you'd like to know.....Cheers......

(thanks for the visit to mine!)

Nice action shot that 'u' took! I'll be on vacation for two weeks starting tomorrow, so won't be able to visit. (I've used scheduled posting on my blog; hope it works.)

My U is a calibration instument for mobile phones. It checks and adjusts the receiver and transmitter on the phone.

Thank you for your nice comments. I put a smile on my face :)

...and a D for daredevil too!! What an amazing picture to capture the biker in mid-air. Thanks for visiting, and glad you are feeling happier today!

You really captured the action in your shot. I invite you to come see my U is for Use and Re-Use. -- Margy