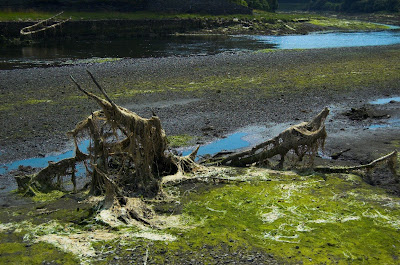 How to combine ABC "W" with the vikings theme? Had to be words that have been assimilated into the Manx language, place names and surnames. It appears the one thing that that the vikings didn't vanquish was the Manx language, but there are a few examples. Norse words seem to be a very murky area to research. So much contradiction of what is a pure Manx/ Celtic/ Norse word or phrase. I have however found more than I was lead to believe exsited in present day form, so here they are.

A SELECTION OF PLACE NAMES

A SELECTION OF NORSE MANX SURNAMES


Only a handful of words as such are now incorporated into conversational Manx.

Manx language, viz, cleg, from kleggi; a horse-fly; blaber, from blaber, a bilberry; ling, from lyng, "heather;" gil, from gil, "a deep narrow glen;" ghaw, from gja, "a chasm," rift, and kirk, from kirk-ja (this being derived from Greek, kupixkos, "belonging to the Lord") a church.

I hope at some stage to delve deeper with the Norse side of the language and see what else can uncover. It is again very subjective as the Manx language is in the main of Irish/Celtic origin.

The photo is Sulby River which runs into the Harbour and along the nature reserve. Just to be confusing the river is Norse, the reserve name isn't!

Like to join ABC Wednesday? Please got to this link, MRS NESBITT'S PLACE
Mrs Nesbitt is the host for ABC Wednesday, where you can find details for joining, her own ABC shot to comment on and a list of fellow bloggers who are playing today, who would also appreciate your comments.
Posted by Jane Hards Photography at Wednesday, June 25, 2008

Babooshka, "Louis" said you should reach around, pat yourself on the back and say "Attagirl!" What "Louis" REALLY enjoys is learning about word origins. ("Louis" was an English Literature major, so that's where a bit of that came from.)

In a related vein, take the word 'lavender'. Do you have any lavender-scented linen spray? Any lavender-scent cleaning products of any description? If so, you are participating in a tradition at least 1,000 years old, if not older. Lavender has been used as a cleaning agent for so long that it's Latin root is the same that gives us 'lavatory' in English, lavabo in French: wash basin.

I have a soft spot for low tides...
Great shot.
I am sorry I have not been able to read all your texts about the Viking I don't have enough time for the moment, but I definitely will ,as soon as I can, because being from Brittany , France I find all that History very interesting.
Have a good day.

thanx a lot for visiting my blog,
greetings from Truxillo - Peru

and W is for WISDOM for sharing this about WORD origins.

and W is for WISDOM for sharing this about WORD origins.

Great photo with great explanation! I learned something new today! Thanks!

My "W" picture is now posted in this blog:

Hope you could drop by.

Really interesting information and I liked it for your W choice.

a very clever post. and interesting too. wonderful shot

When I came over I was wondering what W would go with your viking theme this week - wise choice words!

A subtle take on the theme. I like the picture.

Once again you did it - very interesting. Research into names is very difficult, and you can rarely find two researchers who agree upon the interpretation of anything in this field.

However, I can definitely state that the klegg also enjoys human blood!!!!

As always, an education.

Bab, I read a book years ago, Clans and Families of Scotland and Ireland. They traced names back to viking origins and some were Pictish, strange sounding names. How they were converted to what we have now makes me wonder.
I love this topic tho. I always enjoy your blog.
If you haven't read the book, I think it is by Cairney, it is small, very small and green.

Bab, I read a book years ago, Clans and Families of Scotland and Ireland. They traced names back to viking origins and some were Pictish, strange sounding names. How they were converted to what we have now makes me wonder.
I love this topic tho. I always enjoy your blog.
If you haven't read the book, I think it is by Cairney, it is small, very small and green.

Excellent! Your Viking lesson today was wonderful! I love learning the roots and origins of words! The photo is great too!

Thanks Babooshka for all the trouble to look up all the Viking names! "By" means town or city ïn the Scandinavian languages. It still does. I read all your Viking stories! Are you going to have them published? In that case I'd like to buy a copy.

Words and names are fascinating. The derivation is often obscure, but I love investigating. Another interesting post.

I enjoy very much the viking notes.

Thanks for your visit to my blog Brookville Daily Photo this morning. I hope you enjoyed my post today showing the baby rabbit eating the hibiscus flower.

I am now taking a diminishing dose of steroids for my Rheumatoid Arthritis pain and it works. I am pain free. I believe the chemotherapy drug is spelled "Methotrexate" that is used to treat a lot of things from cancer to arthritis and it has side effects that are troubling. So I need to talk to my doctor about it before I take it. Just missing a dose can be a real nightmare.

Anyway, I wanted you to know I stopped-in to repay your visit and comment with mine.

I enjoyed reading your blog post for today about names that begin with or use W and I thought your photograph was excellent.

I don't know if you like to read or not but if you do this place is amazing.

I just got my first shipment of used books from Strand's bookstore in New York City, yesterday. They have 18 miles of used books. Think about that. Anyway, they got here and I am totally happy with those I chose to read. I had to start out by just choosing a category, like photography, and go from there. I don't know how in the world they can keep track of so many books.

Look up Strand bookstore or copy and paste the URL here: http://www.strandbooks.com/app/www/p/home/

Babooshka, This is a great series! Love it!

What a great take on W. Words - and learning their origin. Never knew the Vikings had that much influence over the languages of Great Britian - or at least your Manx language.

And thank you for your visit!

I have been photo-blogging since May of 2007. I have learned so much on the blogisphere through blogs such as yours. Thanks, this learning is fun. I've said this before, and I'll say it often.

Amazing what these Norse Vikings have accomplished and the culture they spread around that we still see today.

Wow this is really fascinating stuff. Word origins are very interesting. have a wonderful week.

Educational AND creative.. what a wonderful combination. Another blog to bookmark!

Thanks so much for your kind words on my blog this morning.

Excellent post.. a great 'W' for sure.. Great reading as well.

Informative and has been pointed out, so full of wisdom!

Great photo and interesting text.
I lived on the East coast of England for a while and got used to the evidence of the Vikings in place names and everyday language. I don't know why but it had never occurred to me that they'd reached the Isle of Man..

Well, that was educational.
Thanks for sharing the info.
Great W post.

Wonderful and worth while .. (working to word it all in Ws)

Very interesting. Love the photo too.

Glad you enjoyed my holiday snaps :)

Truly great blogging hen. You need to do the Scots connection for me.

Really enjoyed this post with all the info and of course a fab piccy too.

Beautiful blog really did enjoy this submission by you.

Thank you for the lovely comment on my blog.

A fascinating insight into the history of the island. Brilliant stuff and well worked into the W theme and vikings. I recognise a lot of the words (but different spellings) being a cumbrian/borders lass -
Ghyll in cumbria (same meaning).
Cleg - we called them clegs as kids.
Kirk - right across the North I think, maybe elsewhere.

I recognise others too across the country which are probably viking/norse names rendered differently in different parts of the country. Like Tynwald - I have heard of that before as an assembly, and Daleby / Darrelby or similar.

Really interesting stuff. Thanks for visiting mine.

Sara at Come Away With Me said...

This is a very interesting post; I enjoyed the information and the photos.

Wonderful and interesting W-post! Have fun:)

Interesting and educational post for today. Thanks for that. And thanks for dropping by.

Very interesting, as have been all of the other posts this past week or so with all the Viking inspired photos and stories. I've always found it fascinating.