ISLE OF MAN COAT OF ARMS 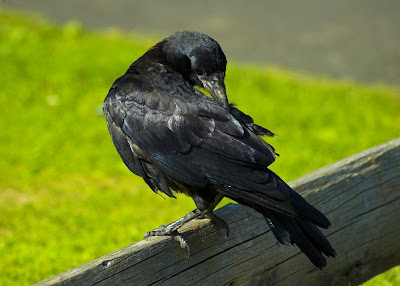 As is Critters Sunday and my Viking week, I thought I would try and combine the two themes. Unfortunately I have no Isle of Man raven pics, but I do have this coy crow that people always mistake for a Raven. So the pic covers the Critters part. Next the Viking/Norse theme.

This leads me to the obvious conclusion of showing you the Isle of Man coat of arms. Rhumsaa(Ramsey) as I said in yesterdays post takes it's name from the Norse for "wild Garlic river."This is the popular theory and the one that you will find in most literature and offered by the Isle Of Man itself. The lesser theory is it actually means " Raven's Isle." It is a smaller school of thought, but when you consider the coat of arms contains a Raven, the Ramsey swimming team is called the Ravens, and Ramsey Grammar School's in house magazine has a Raven theme you could be drawn towards the " Raven's Isle" theory. Ravens or wild garlic river, either way, it's a Norse derivative that no one can deny.

Below is the Manx Coat Of Arms. Note the raven on the right which represents the Norse Settlers and their influence on the island.

Two ravens sit on Odin's shoulders, and bring to his ears all that they hear and see. Their names are Hugin and Munin. At dawn he sends them out to fly over the whole world, and they come back at breakfast time. Thus he gets information about many things, and hence he is called Rafnagud (raven-god). As is here said:

Hugin and Munin
Fly every day
Over the great earth.
I fear for Hugin
That he may not return,
Yet more am I anxious for Munin

The Isle of Man is steeped in myth and legend, hand me down fables and facts. It is a curious mix and a trial to sift the real from the imagined. The Raven though it seems, does play it's part in the making of the Island, thanks to our Viking Ancestors of which there is no doubt.

I thought it was a crow! But what's the difference between a crow and a raven?

Hmmm...I didn't know Isle of Man residents are of Viking ancestors. I remember as a kid, my Geography teacher went to Denmark and told us all about her trip. Since then I've been fascinated with the Vikings.

Very interesting history and information. Traditions and legends are difficult to pin down. Looks like you've put a significant effort into your research. Great post!

I look forward to more. This is very good history.

Nice shot, B - and an interesting post. Because of using inadequate hardware, I have no pictures of birds that frequented our island. A distant snowy owl and that's it. We had many raven and, of course, those lovely chough.

I wouldn't know the difference either between this bird and a raven. We have a lot of black crows here but now I wonder if there are not ravens ?? I probably slept during biology courses.

I like that, and I like the way you've fitted it into your theme. I'm finding your history fascinating.

Laxey is Norse aswell. This is great.
The cow looks kinda cute.

I would have thought Raven too! Excellent shot!

My entry is here

Thanks so much for stopping by! Have a great week ahead!

Don't forget the Celts! Enjoying these new posting. The Viking left their mark here too. Is there more of Scots or Irish influence? Hope it's Scots.

Babooshaka: The crow also acts like a regal bird at time. I love Poe's portrayal of the Raven,"Quoth the Raven, nevermore".
Very nice post today.

I do visit and I do comment and I was here. I did look at your picture(s) and I did read what you wrote about them. I could say how great you are and how beautiful your work is but alas I would soon run out of things to say on the next blog I visited, so I just left this to prove I stopped and said a few words on Sunday. Just posted his cousin on my writing blog.

My Rheumatoid Arthritis hurts so I am using the same message for all.

Great reading! You have been doing your homework! I don't care if the photo is a raven or a crow, and wouldn't know the difference unless they were side by side, but it is a really nice shot!

I think the Viking Ship I sent you was also called the Raven, but I have to check!

enjoyed the 'arms' details as well, thanks for sharing :)

Wonderful and interesting to read all about the Vikings, Babooshka! Is it true that on your island there are traces of the Celts and that a Celtic language is spoken on the Isle of Man? At least that's what I was told.

Thanks for your visit!

Great shot - I love Ravens, they are such interesting birds. Thanks for the lesson too!

Very informative post, I was ignorant of these facts. Thanks for sharing.

I am loving the history lesson, this is something I would probably not look up myself. Its very interesting.

We've got these big raven looking things around here called Crackels I think. They are get black, with pointy beaks. I think they are a type of crow.

This is a very nice pic. You have really preserved the details in the black shiny feathers on this little fellow. I always seem to have the details disappear into the shadows!

You could have told me it was a raven & I would have believed you. :)

Thank you for the info on some of your Viking ancestry. Very fascinating!

Here is my entry for this week.

The gloss and the colors on the Crackel stand out. I only get flat black matt. Viking got around and left a legacy a lot of places.

Great shot of the Raven and very informative information

My immediate reaction: quote the raven ..

Then: Ah so very Stephen King

Great photo - I have enjoyed reading all about the vikings.

I"m glad you said it wasn't a raven because I didn't know the difference. Great shot, and lots of interesting info and history in your post today.

Thanks for stopping by and visiting me!

Very nice shot of the crow. I always want to think of them as a raven even though they are not. Don't see many ravens in my neck of the woods, but have seen plenty of crows.

That's a really awesome photo, and an overall great post.

This really is turning into a great series of posts.. I look forward to more instalments... I.O.M. should be proud of these posts.. well done.

Always interesting to learn of others local and culture. Thank you for this lesson, always fun to learn about the behind the scenes of the image.

Such an interesting post and great photo! Thanks for sharing the history and lore too.