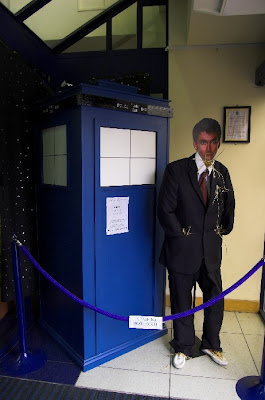 If you are from the UK you will recognise this shot, if not this could mean absolutley nothing to you. I've put the whole wiki link in, with other links for you to check out in full about the programme. Bascially, Dr who is a British TV Sci Fi Institutiion. To celebrate the start of the new series Ramsey library had this cardboard cut- out situated in the entrance. It really was wierd to be confronted with this as I went in. Thought it worthy of a pic and they kindly agreed that it was ok to snap away. For CHELTENHAM, MARLEY this is for you, and a up yours to the officious little jobsworth who won't let you snap sweeties in the mall. The daleks will get you one day!

If David Tennant is looking for an assistant then I'd love to go, so long as he drops the mockney accent for his natural Scots burr. Gary said this is fine so long as he can go accompanied by his former assistant Sarah Jane. Unfortunately if Sean Connery wants to come out of retirement to play the Dr, then no way can I be his assistant. Gary you just don't play fair.

From Wikipedia, the free encyclopedia

Jump to: navigation, search
This article is about the television series. For other uses, see Doctor Who (disambiguation).

Doctor Who is a British science fiction television programme produced by the BBC. The programme depicts the adventures of a mysterious alien time-traveller known as "the Doctor" who travels in his space and time-ship, the TARDIS, which appears from the exterior to be a blue police box. With his companions, he explores time and space, solving problems and righting wrongs.

The programme is listed in Guinness World Records as the longest-running science fiction television show in the world[1] and is also a significant part of British popular culture.[2][3][4] It has been recognised for its imaginative stories, creative low-budget special effects during its original run, and pioneering use of electronic music (originally produced by the BBC Radiophonic Workshop). In Britain and elsewhere, the show has become a cult television favourite and has influenced generations of British television professionals, many of whom grew up watching the series. It has received recognition from critics and the public as one of the finest British television programmes, including the BAFTA Award for Best Drama Series in 2006.

The programme originally ran from 1963 to 1989. A television film was made in 1996 as a backdoor pilot for a new series (which never entered production), and the programme was successfully relaunched in 2005, produced in-house by BBC Wales. Some development money for the new series is contributed by the Canadian Broadcasting Corporation (CBC), which is credited as a co-producer. Doctor Who has also spawned spin-offs in multiple media, including the current television programmes Torchwood and The Sarah Jane Adventures, and the 1981 pilot episode 'K-9 and company'.

The show's lead character is currently portrayed by David Tennant. A Christmas special co-starring Kylie Minogue aired in December 2007, and the fourth series started on 5 April 2008.[5] For that series, Catherine Tate reprised her role of Donna Noble, from the 2006 Christmas special, as the Doctor's latest companion.[6] Midway through the series, Freema Agyeman has also returned to her role of Martha Jones, following a multi-episode guest appearance in the Doctor Who spin-off series, Torchwood. John Barrowman will continue his role as Captain Jack Harkness,[7] and Billie Piper will return as Rose Tyler for three episodes.[8] Elisabeth Sladen is also set to return as Sarah Jane Smith.[9]

Lol! I hope that mean security guard is good and scared now!Thanks for the link!

I'm a big Doctor Who fan, so this post is even better for me! I won't tell you about my rather sad Doctor Who action figure collection (all still boxed! I know. Sad!) I think the library Tardis looks a bit ropey though. I enjoyed all the wiki facts too.

I'm off on my holiday so I'll catch up with you in a week and a bit. Unless of course the Doctor makes you an offer you can't resist! Take care :)

Babooshka - re your comment chez Louis: MANY people think "Louis" lives on another planet. Somehow "Louis" thinks they have something different in mind from you, however....

LOVE Dr. Who, both the old series and this new one! I was dissapointed when Christopher Eccleston left but loved Tennant in the part quickly.

I missed what happened to Rose, did she just go back home?

We've discovered Dr. Who and watched the first disc of the first season recently. Good stuff.

I am a big fan. Thanks for this.

I never see dr Who

this happening in France, I know it has a lot of success, but as a friend Bergson I've never watched.

I taught a David Tennant when he was 10. He lived out the back of our house together with his parents and brothers. He asked if he could camp in our garden...we agreed. I took them breakfast....oh and did the torch under my chin scare too! LOL! Strangely enough I am just doing the stationery order for his brother's wedding in August! What goes around comes around eh?
We have loved Dr. Who, but Catherine Tate did nothing for us and we missed this series.

Looks like we have both gone for very BRITISH odd shots! Love David Tennant. I watched the new series avidly the first two (or was it 2?) Anyway, gave up when Catherine Tate became the permanent assistant.

Loved the 1st "new" Dr. Who too -forget his name right now. But in the old days, it was Tom Baker for me. Jon Pertwee frightened me as a child (as did daleks) but as an adult, I recognise his versatility as an actor. He was a good Worzel Gummidge.

As a long standing Dr Who fan I loved this.

Yes, I too would be David Tenants assistant any day.
Did you see him in BBC's Casanova - wow - just had to buy the DVD.

Happy me. I don´t know Dr.Who, but If Ursula Andrews still is coming out of the oceas, I am ready to play 007

If Connery played DR Who you wouldn't get a chance to be his assistant - I'd mow down anyone who got in my way! OK, I'm old, but I can be at least as decorative as Catherine Tate if I put my mind to it.

Since my twins use to see Dr. Who on cable TV I knew what was going on around here!
Great informatuve post.

I haven't posted yet, but here I am anyway.
Wasn't this weekend's good. Superb acting. Did you notice the Troughton connection?

Found your blog beacause it said Dr Who. This is so cool. I am a Dr who addict. Tom Baker cannot be topped. David Tennant is not bad. This has made my dreary monday morning sparkle. Thanks for the links and the strangest Dr who promo. ever.

I haven't gotten into the new Dr. Who but I loved the old one... I just haven't had time to give it the attention it deserves. Going to check your links, now :-)

Good old DR WHO. Don't really rate the new stuff, but David T. is the best looking one. Thanks hen for saying his Scots Burr. This Scots lass agrees.

Great shot babooshka! I've learned so I also like the photo! the lifesize cutout looks interestinG!

God Bless and may we have a great week^^

Its airing here in the US or at least here in NYC but we've not watched ...

Meeting Dr Who and the Tardis in Ramsey Town Hall / Library is indeed odd. Not a great fan myself but like the quirkiness of the picture.

Babooska, thanks for you comment at One single Impression... Can you believe I forgot Odd Shots?? Oh dear, let me go see what I can find!

I don't know anything about Dr Who besides what you wrote which is a lot. I meant to say he is NEW to me today! That cardboard looks very real to me! I bet when they are finished with it, they could auction it off and bring in a pretty penny for the library!

Torchwood is better. Nice work putting this together.

Marley. have an good one and I'll sort out that secuirty guard.

Blue. It's the mockney, It's just wrong

Sharon. Rose was rescued and transpoerted to a parallel universe by the Dr, but can't return to earth. Or can she?

Aileni. What has happened to your link? Yes spotted the son of the former Dr. Nice touch. Agree Excellent writing.

Dagonstar. Never, say never too old. Look at Sean. I would however play dirty a use some manx fairy magic for the assistant job.

I like the Dr. - seen some on public broadcast stations, and some on the Internet. Looked for a real police box when in London, but alas, couldn't find one. My current dream is to own a Mini Cooper with the license tag TARDIS.( but for now I'll just have to keep my non-TARDIS truck)

I remember that Dr. Who used to be on the television here too. I thought the good Dr. had a big curly hairdo though, and a longish stiped scarf? Maybe another incarnation of the show? I have to go back and read the Wiki of your post.

I've seen a little Dr. Who on Public Television, but not enough to really get into the series. Almost anything made by the BBC can find it's way onto U. S. Public Broadcasting.

Your photo of the cutout in the library qualifies as a great Odd Shot regardless.

The polar opposite of Chuck Pefley's Vespa.

Your cardboard man here reminds "Louis" of these cardboard men at his old blog site.

I heard of him but never watched lol. his pose seem to be ready to spring you and pin you down the ground....