MEN NOT AT WORK! 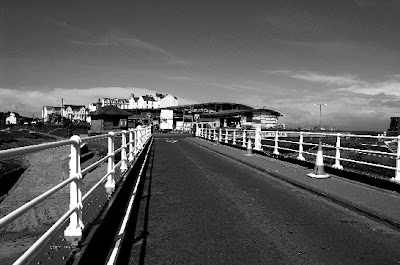 In the 5 years I've lived in Ramsey, this is the first time the bridge has had a new lick of paint. Don't panic Stephen, it's the same rich red and white colour scheme, just a glossy new coat for the old lady. Where then are the painters? The cones have appeared to cordon the rails off to the right, but no men at work to be found. Perhaps they have sloped off to the Laxey Blues Festival that has just got underway or been kidnapped by aliens? Perhaps they just saw the mad woman photographer and took flight. Who knows? One thing I do know though is the cones are on the wrong side! The freshly painted left side should have been cordoned off. Perhaps this was their little joke. Lots of left white gloss painted hands in Ramsey this week. Very manx.

As I mentioned above, the Laxey Blues Festival is this weekend. Local and international bands take over the town and simply play music from around noon until the early hours. Me and my camera will be there. I will try an capture an image, but I may just forget and enjoy the music.
Posted by Jane Hards Photography at Saturday, May 03, 2008

It would help if I could type properly!

I meant lovely, not loveley!

Hi, Babooshka! I like this photo and its irony of the cones...or devlishness! Been out of town a couple of days, but just to say I like your photo of the oyster catchers, too!

Laxey Blues Festival is the best.
This doesn't look like Ramsey.
You've made it look bigger.
Very good photograph.

What is the building at the end of the bridge? Is it new?

I like this black and white photo! I love the view down the bridge! Great perspective!

nothing like a wet oaint sign to tempt the curious and even when there is no sign ... enjoy the music and if you don't take pjotos never mind - scuse typos my fingers are haywire todsy.

Sounds like typical work men. No where to be seen but the cones are out!

At least it gets painted. Nice shadows and contrast through the rails.

Very nice photos on your blog! :) I hope you have a great time at the blues festival...wish I could join you. My husband and I enjoy music, esp. jazz and blues now. I'm happy to join the Sky Watch crew. Also, posted another duck shot for you though it is not close up. :)

It looks like a sequence of the master Stephen King movie....Just perfect. I love SK.
Great!

They may be camera shy but I suspect you'll find them at the pub.
Btw very nice photo.

Love the idea of white hands!

Great point of view of this bride.
The B&W gives it a nice atmospher

This is a marvelous look down the bridge to the houses on the hill beyond. I like the black and white too. Those cones look better.

I think I see you pattern of images.
It is very different from yesterday. The wide angle, did you crop or not? The rails really lead you in. Very cinematic. Keep it up.