HOW SAFE WOULD YOUR WASHING BE? 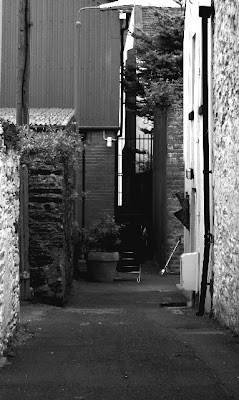 I often write about Ramsey and the Isle of Man in general being a different way of life, a step back in time. I've looked for images that are universal, that reflect this nostalgic image without being overtly sentimental. This is the kind of scene I wanted to depict.

Behind the harbour docks are a series of alleys with rows of terraced houses. No cars or bikes cluttering the roads, nothing to indicate anyone lives along them. Not usually anyway, but this week I was fortunate to spot signs of life. It may not have any locals, but it's definitely their washing hanging out to dry.

You may need to enlarge the image to see it properly, but just behind the plant pot is washing hanging out to dry. I would say it's hanging on something called, from my part of the world, a "clothes horse." It's also refered to as a "maiden " in certain parts of the UK. What would you call it in your part of the world? To me it's something I have never witnessed in my lifetime until I moved to the island, but recall from old '60's British black and white films, which I love. Washing hanging out to dry, in a public area that wil not be stolen. Now how much of a step back in time is that?

Do you ever come across washing left to dry in a public area, a back alley say? Do you do this yourself? Is this image a sign of past times? Like to hear your thoughts again on this one.
Posted by Jane Hards Photography at Thursday, May 29, 2008

I do see laundry hanging out to dry, but usually at rural trailer parks, never in the city. When I was a kid people hung their laundry out on clothes lines strung from the back of the house to a tree or fence. But that was when my life was lived in black and white, if you know what I mean! LOL

Great photo ... I love the black and white effect!

love the picture. in india it is the done thing in the rural/semi urban areas. in the cities however the laundry is set out to dry from the balconies of apartments.

Hi! Most people here in the city own their own apartments, so no laundry drying in the public yard below. However, this photo reminds me of many photos I've seen where I lived as a little girl in Pennsylvania. I was too little to remember the surroundings myself, but I have one of me and a little dog standing in a place almost like this. Nostalgia!

I have always had a clothes line but it is a private one (mine) not in a public place. I wonder if people mark their clothes not because it would get stolem but because someone might accidentally take it down and then an owner could be found. Very old time photo. MB

Well I certainly saw lots of this in Europe, but typically not in the US ... at least not in the larger cities. Clotheslines are fairly common in backyards, or used to be ... I think most people use electric dryers these days.

it remains to Evry, an old wash house, but it's been a long time that it is no longer active.
I really well in your photos b&w.

Lovely post and sentiment. I don't see washing hanging in public as such - but of course it's hung from windows here in France. The Isle of Man sounds such a lovely place.

i just say that this is an interesting post.

I have sometimes seen it in communal backyards but usually only in places where there is someone keeping an eye on it.

No one pegs out washing in Cardiff, it would get nicked. You live in a nice place.

Nice to see this again. I like to see clothes on the lines drying and recently wrote about it.

wow babooshka! This is a really interesting post! Here in the Philippines, about 80%(rough guess) do their laundry by hanging them. At our hous, Our roof top is roofless and we usually do most of the batherings there on our third floor. But we really use it for laundry.

We wash them by machine, some fabrics by hand, then we toss it to the dryer for about a minute then we hang them on the clothes line.

My yaya(nanny) ones told me that when she went home to her province Palawan(Such a beautiful Place), her clothes were stolen from the clothes line. They were shocked the next day as they went to the market place and saw their outfits on the second hand sales! Isn't it wierd! Well, some people have weird businesses or as I may say, crimes!

Have a great rest of the day Babooshka! And thanks for wishing my site well. I also hope that many people will drop by on it! You'll always be one of the best bloggers I've known in my entire life for your greatness and kindness

When "Louis" lived in France, he noted that in many French homes, clothes were hung on drying racks inside, but he doesn't recall seeing clothes hanging outside. Aux États-Unis, "Louis" hasn't seen clothes drying outside in years. "Louis" was having flashbacks on his mother's clothesline, the bag of clips, the clean smell of sun-dried laundry. Like Chuck Pefley noted, most people here seem to use electric dryers these days. Les Français shun the electric dryers, though many homes have them, bcause of the cost of electricity.

In the "save the planet" materials I've been reading lately, we're encouraged to shun our electric dryers and hang clothes out to dry. This is more possible in southern California than perhaps where Chuck P. lives, or even Louis la Vache. (Both damper climates.) Around here in Pasadena one will occasionally see a clothesline or a clothing rack (which is what I'd call the contraption in your terrific photo). We're beginning to see them more, as folks take up the cause.

I see this in Gardens only.. and even then it is not safe..

You reminded me of a poem or tongue twister..

My nana still pegs the washing out over the fence in Laxey. We don't do
it in Bath. They are snobs here. Hanging out washing is common to them.Is that Mona Street? Is it full of horrible tourists yet?

Clothes horse and maiden are code for washing line? I think I'm gonna try to fasten some more words to that and see what happens.

When I was in Rabat, the family who put me up used to hang my clothes on a line strung across the front of their 8th story apartment. They got dry and they got gray with the soot of ten thousand little, coughing-engine cars.

Not in my lifetime either. Very classy photograph.

Wonderful, evocative pic. I actually live in a community where hanging clothes out to dry is prohibited! Elsewhere in town however you would likely see clothes hanging in a private yard. I don't think I have ever seen clothes hanging to dry in a communal space such as this.

Also, if clothes were on a maiden we would say they were hung on a rack, but this would only happen as an expedient way to dry clothes if there was not a line to hang them on.

I do hang my clothes out to dry, but in my backyard, not in public. I think more people should do it - it's much better for the environment!

What a great picture. My mom used to hang our wash out in the backyard, and I still use drying racks occasionally in my apartment - just hang them by the open windows, so I guess all the downtown visitors can see my stuff.

i love these scenes, they ar the kind of scenes i want to capture in my own town. yes, i have come across washing, and it is a spectacle in hania - women are very traditional clothesline hangers here. whites are always separate from coloureds, size is important, as is order. (unlike my own washing line - where it all gets mixed up)

Perfect street scene, or alleyway as is the case. Excellent in black and white.

I missed this the other day! Great image! I still hang my wash - mostly just my sheets and towels, since I love how fresh they smell after being on the clothesline!

Unattended (and even attended) items of value in a public place don't stay their long. Everything must be kept well secured here!

it is still very common to hang washing out to dry here, I suppose a combination of big spaces, fine weather and an erratic power supply! But it has to be in a well secured courtyard, or it would not last till you got back inside and closed the door!

This is simply perfect. I love the whole photo and the story and the whimsy.

Around here, ranch wives put laundry out and you can drive along the dirt roads and see the washing bobbing on the line in the far distance, making you wonder why people might be dancing in a filed until you get close enough to realize...

We would call that a clothes horse. In this country leaving your washing out in a public place would be shear foolishness - unless you sat there and watched it dry.