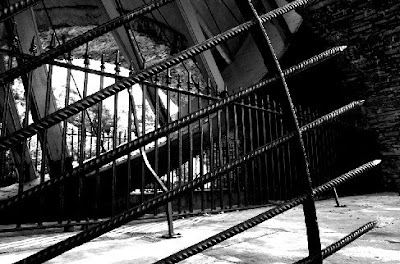 Laxey Wheel, The Lady Isabella(named after the Lieutenant's Governer's wife ot the time) was designed by John Casement in 1854 and used to pump water away from the mines. It still remains the largest working watermill in the world. Now, it's one of the main tourist attractions on the island. The brave, for a small fee can go to the top and survey the land around. I just chose part of the wheel today because I was more interested in the spokes. It struck me that these would probably not be constructed this way now on the grounds of health and safety.

The "Triskelion", the 3 legs of man symbol displayed on the side (not in view but in an earlier post) is the national image of the island and is actually the wrong way round. They forgot to reverse the image when it was transfered and so remains the opposite way round. Incidently you may have seen the 3 legs symbol on another islands flag, that of Sicily. Now you're not so sure if I'm joking when I refer to the "Manx Mafia"

Laxey, is from the Norse word Laxa and means "Salmon River." A normally sedate town the quiet is disrupted(in a good way) once a year for the Laxey Blues festival. Virtually the whole town is turned into a mini Glastonbury, without the mud, and good time is had into the early hours by all as seen by earlier posts this week.
Posted by Jane Hards Photography at Saturday, May 10, 2008

It was you, wasn't it, who wanted me to do a Birmingham Daily Photo? Well, I set up the blog about a week ago, but I'm yet to find suitable photos that are different from the ones I'll show/have shown on Shutterspy.

I love the opposing lines in this picture.. HOT shot!

I have never noticed those spokes until I saw this photo. That's why I'm not a photographer. I like the layers of lines and curves. Fantastic in black and white.

Thanks for another Laxey image.

Interesting post and a great photo too! You're right, they would never be allowed to build something like this these days!

Wow! What stupendous photography on your blog! And the information you give is fascinating - I'll be sure to check back often.

Those tines must have been dangerous when they got up to speed. Everything to do with mining seems to have had hazards.

Interesting history that goes with a curios photo. You sure the triskelion is not of the nazi? Kidding, Oh I am not even sure if its fine to joke about that...=D Happy weekend!

Ahem! The comment above,what can one say? It does look like an awfully dangerous structure,almost sadisitic.
Black and white ideal for this subject matter.

This wheel looks very intricate, but then again, I'm not mechanically inclined. I like the way the lines intersect in your photo.
Thanks for your comment on my blog; I'm still learning how to shoot in low light. I definitely do not want to use flash in an intimate setting like a jazz club, as it disturbs both patrons and musicians.

Loved the information in your post today! The picture was very, very interesting too. I am glad you chose to focus on the spokes!

Outstanding photo! "Louis" really likes the geometry of it!

Lady Isabella, I remember visiting her.
I do like the black & white image - very effective.

Great picture, I really like this view.
I also found the writing very interesting...
Tom