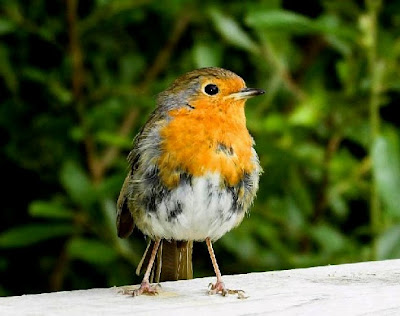 Unlike a lot of my bird photos this is one I haven't had to save, it's just one that was very obliging and posed nicely for me. No he hasn't had a trip to the taxidermist, he really was that still.

I was going to just use Robin for the the title, but then I realised a lot of you wouldn't recognize ths bird. Having seen an American Robin on several of your posts, you can see the two birds differ greatly. The British Robin is easily identifiable by the red flash, therefore, not surprisingly they are also alternatively called Robin Redbrest. A common winter garden visitor with a beautiful birdsong, a British Robin.

Golly, the colors are stunning and it is amazing how perfectly still it remained. You must be very proud!

A great catch, B...never easy! I spent much of yesterday trying to get good shots of an Eastern Bluebird.

What a beautiful bird! A great shot!

How did you get so close? Precious.

He is fantastic! Sooooooooooo much character in such a small guy!

Mmm, I haven't seen a robin in ages. They usually come to the garden a lot in the winter.
Great pic
Ciao x

What a great catch. He is a pretty little bird, and thinks for the clarification!

Really beautiful!! It looks a lot different than the robin here.

He is neatly framed,i mean in your lens. :)

That's a really nice picture. So how long did he sit there for you?

How good of him to sit so still to have his picture made! Very nice shot of a cute little bird!

A beautiful photo! I can't believe he held so still! I never would have guessed the color would be so different from an American Robin.

This bird is gorgeous, and a real ham to have posed for you! I hadn't realized there were two kinds of robins.

What a beautiful bird! Great photo!

Babooshka: The English robin is very different. It almost looks like it has an orange breast as compared to our robins. Great picture.

Looks different than ours. Nice shot

That is an absolutely beautiful bird! How very kind of it to stand so still and post for you so you could take this great photo!

Nice picture of a pretty bird, His legs dont look strong enough to hold him up.

Perfect photo. He sure does look different than the robins here. His coloring is beautiful.

Cute little critter! He is cooperating so nicely.

O my how clear this is - such perfect focus - I'm jealous now. I'm trying not to photograph my birdie visitors because by the time I reach for the camera I've missed the enjoyment.

PS - there's a typo in your title.

I have 1 very much like that one, captured mine at Heligan Gardens in Cornwall. Mine stood still too.


Thanks for your kind comments on my Camera Critters.

So totally differnt that is for sure in comparison to our Robin here in USA.

Very pretty with the spashing of yellow on it's breast.

I am enjoying your blog, lots of nice and wonderful photographs.

Lovely photo. You sure its not stuffed?!

what a perfect shot

thanks for the info about him

Mme. la Vache loves birds, so this photo put a smile on her face! Thank you!

What a cute little guy! I didn't realize British robins and American robins were different. Thanks for the information.

What a wonderful capture, darling bird

I've recently learned that our robins are not the same. You learn a lot blog-hopping. It is very educational.

That is a stunning shot! Well done!

We don't have robins here - so I'm intrigued to see your explanation of the colour of the flash.

I really enjoyed your photo (and the post) on the Men Not At Work ....

Wow! What a great shot!

Thanks for stopping by mine :)

il est tout mignon, on a envie de le prendre dans ses mains. superbe portrait
it is cute, we want to take it in his hands. beautiful portrait

Hi there, was just passing by. Don't you think that pictures of animals are probably the hardest to take? I'm not a pro, but I absolutely love fiddling with my camera.

Lovely shot, Boo. I first realized how different our robins were from yours when watching that part in the movie, Winged Migration. Happy to know yours is quite the songbird too.

First of all, I would like to say that this is a stunning photo! Very nice Composition!

second, I would like to extenc my utmost gratitude to your appreciative compliment to my Blkog! I am truly thankful for your kindness!

By the way, I'm Steven Que from the Philippines (Cavite) and It was really nice knowing you and your very Beautiful Island Isle of Man, UK^^

A nice little piece of Britain for me :) I dont think you get any Robins down here in Cape Town.

Great pose, you sure he's not stuffed? :)

Are you sure that isn't a taxidermized (is there even such a word) robin? It looks like he has a huge stick up his a**.

Your Robin looks somewhat smaller than the American Robin, about Sparrow size. But it is a beautiful bird.

It's a very ruffled looking robin! Looks like it's been doused with water! :-D