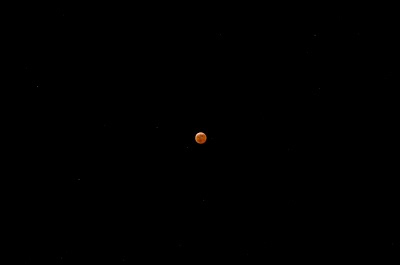 As we have had an inadvertent red theme going on this week, what with poisonous mushrooms and berries, I'll continue with one from the archives again. Taken on the day we moved in. Yeah the unpacking could wait. Set the tripod up, grab the remote and capture the phases of the moon. Much more fun than unpacking.

Red occurs, when bits of light, photons from an astronomical object pass through the Earth's atmosphere, scattering off of particles. To confuse you particles scatter blue light more than they do red light. Blue photons have shorter wavelengths get scattered, and red photons having longer longer wavelengths pass through. Sky objects look redder from Earth than in space, because red wavelengths from the objects, penetrate the atmosphere more so than the blue ones. Also the closer to the earth's horizon, the more noticeable this redness in both the moon and the sun is. Cool eh! Also, apologies to anyone hoping to find "red moon" comic book, book, or computer game here. Wrong blog!


For other skies around the world click here after 8pm.
Posted by Jane Hards Photography at Thursday, October 28, 2010

Great capture of the red moon and an interesting post.

How interesting! Love the moon's red color caused by particles between the Earth and the moon. Thank you for sharing and I hope you have a great weekend.

I tried taking pictures of the colorful moon this past week, but didn't have a tripod and couldn't get a good one. But, it was beautiful, as your photo shows. Thanks for the explanation of why it was so colorful. I didn't know that. Also, thanks for the visit to my blog.

refer the red rowan berries 8n your previous post, to be honest.
Red moons always scare me as being warlike.

I was just about to redo my mistyped comment. So sorry. I actually do a preview and still overlook the errors :-)
You managed to decypher it anyway.

I haven't been seeing red moons lately, but the sunsets have been very nice!

Gorgeous red moon, stunning capture as always and thank you for the information! Really interesting post, Babooshka, also as always! Have a wonderful weekend!

The moon is lovely dressed in red. And, hey! The unpacking can indeed wait. (Glad you knew where your camera was.)

Thanks for your comment :-)
I understand that you may have a picture of the red moon, then everything else wait

That's a quizzical expression on the face of that blushing moon.

It looks like a dot on Facebook. Now I see it is the moon and stars. Class.

how pretty, I like that you were able to capture several stars as well.

The moon I have seen so far this week is not red, perhaps because I am looking at it from NY City. I believe it will be a half moon on Saturday and a full moon on November 6. I am wondering what you will
see from your Isle of Man vantage point - if you have
settled in by now!

What a beautiful moon. Your explanations are very interesting and instructive. I see in your blog that you are passionate about red, like me.

I think you over simplified the explanation.

Interesting. Red is my favorite color. I had to Google where you are.

Nice shot of that tiny looking red moon.
I've only seen a red moon during an eclipse of the moon.
Enjoy your weekend!

What can I say. WOW. Hardly expresses it really. Is this really the moon? Is it venus or mars. I don't really care I just want to know how you took it.

Proof that, sometimes, far away is better than close by!
Great capture! :-)

Mo, yes, really is the moon. Used a tripod and remote control. Clear skies though help.

Nice post Babooshka, my camera also rescues me from a lot of unexciting activities.