Even cowgirls get the bbq blues 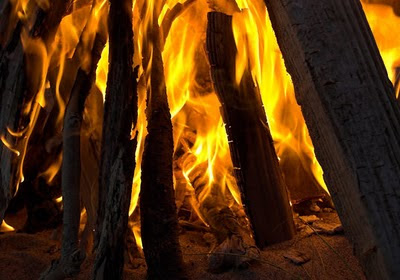 No trees where harmed in the making of this bonfire the beach is full of dirty logs!

Actually that's a lie, the blues come whence bbq season terminates. I never tire of a bbq.... which is odd for a vegetarian( meat eaters you are OK I'm not your lentil eating meat is murder veggie) but bbq's have alcohol, food and good company. Also, it's cheaper than the pub, if you don't mind a little gritty sand on your veggie burger.... sand, yes sand. Did I not say we don't have our bbq's in the back yard?

Small island, lots of coastline, lots of beaches. The "Summer of Fun" as it was known became nothing more than, "who's house are we going round this week to party." Now not everyone wants you wrecking their house so it's hit the beach in a cowboy hat, convert a washing machine drum( don't get your mom's kids find one at at junkyard) into the perfect wood holder and to paraphrase Pink "lets
get this bbq started." Jack Daniels or cans of whatever cider is on offer, plenty of cigarettes, lighters, pray to the bbq Gods for no rain or howling gale, too much food and everyone forgets to buy plastic cutlery. No worries. Maybe toasting a custard doughnut was going too far, but toasted crab stick seemed to withhold the heat and be toasty with a soft centre and not rock hard, so the carnivores tell me. Also tomatoes slide off a metal knife poked in a fire, and lighter fuel and wind are not to be mixed.

I lament the passing of July and August, Bbq bonanza months and the hanging up of the cowboys hats for another year...... Halloween here I come.
Posted by Jane Hards Photography at Wednesday, October 13, 2010

Beautiful image - it looks as though someone is about to be burned at the stake. That would make a change to a hog roast!

Hope you collect your rubbish off the beach. Will be photograph the fireworks bonfire night?

She's ba-aack and in a cowgirl sorta way.
Summer is over we all say with a tear running down our collective faces. MB

Thanks for playing ABC Wed.

Barb- Part of the ABC Team.

Me Jabblog probably. RM yeah I hope to this year. Keep missing it and yes all rubbish taken away. SCS... YES... I have returned back in the saddle with my usual nonsense. Real world too much aggro.. and people have no sense of humour.

She's baaaack, back in the saddle again! Yeah, I'm no Steven Tyler.

BBQ on an open fire with copious amounts of adult beverages make for an awesome evening. Best of all bbq'd anything. Get a pie iron, Wonder bread, pizza sauce, sliced olives and mozzarella cheese and you have a tasty treat to go with all that Jack Daniels.

Amen she is back.

Glad to see you back on form.

Sounds like the perfect BBQ to me. Not sure I could keep up all summer. But then, maybe that's what winter is for. NOT!

Oh we have BBQ waether down here for many more weeks. Somehow I never pictured you as a bonfire, marshmallow roasting kind of girl B! ;)
V

Mannanan visiting you soon and you must do the rugby one week I'm up there. Gaelyn Winter had Halloween and my b'day so not all bad. V. can't have marshmallows veggie, gelatine.... but if you look closely at my real self profile pics there is a girl in a defeathered pirate hat holding a knife with a tomato on over a bbq fire.... I even make my own bbq sauces... it was my house too the bbq. Good times.

I am so pissed off, because I pleaded with my husband all summer to take me camping. He was always too busy. So, I have not sat by a campfire with a beer in my hand, stared up at the stars, or sh*t in the woods this entire summer! Yes, I'll be bitter about this ALL winter!

Simonetta, I am surrounded by meateaters I have no problem with them at all. Misty, I howlwed at your so English "I am so pissed off" from a farm girl in the middle of Yankieland. I want an FB like button for that.

I miss the beach blow-outs and I don't even live near a beach.

Did anyone bring marshmallows to roast on the fire?
Welcome back to the CDP blog community after your long break!

Yes Leif marshmallows came along to be toasted and thanks for the welcome back. Appreciated muchly Mo, The English coastline has always had funfairs, arcades and a dark subservsive side going back years, Blackpoool being the No Hotspot. Still some lovely little places to find. The island here for example may have a funfair visit, but it soon leaves.

"Toasting a custard doughnut"? I think I can safely say I've heard it all now.

Then again, I live in the land of deep fried Oreos.

In South Africa the bbg (we call it a braai) is an institution and it happens all year round, come rain or shine. Some of my favourites are vegetable kebabs and potatoes or a mixture of mushrooms and onions cooked in tin foil on the coals.

This is far too late but finally I'm catching up with your blog and saying 'welcome back!' This is a stunner and of course it is cos it was my birthday! Friday the 13th I was born and to a superstitious mother who never forgave me!...

I have the cowboy blues. Can we talk about it?