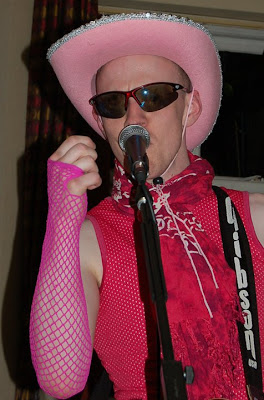 Isn't he pretty in pink

..... taking a break from being the Queen B of the Isle of Man... you have no idea how unruly some of my subjects are.. and trying to be a normal minnion. BORING! So, instead of next month, when my original return to blogging with a bang was planned, I have woken from my coma( the snoozy real world) and reactivated the blog. This will displease many people who thought I had run off to the hills( no just lost drunk with a bag of chips in the woods, yes really) and please an awful lot apparently who seem to be addicted to what I have to bang on about and what goes on in Ramsey. Why? I mean we are talking people in the hub bub of New York think I live in the real Hell's Kitchen. No, it's just the way I convey it to the masses with a little picture which I constantly have to explain. Er, like why has that man got pink fishnet tights as gloves for starters. Have you never read my blog. Hello, I live on an island, named in honour of a man, like their are no woman here and our flag, has 3 legs as it's symbol.... pink gloved men relatively normal pass time.

Oh, if I must explain! I'm not making this up, you are looking at a member of a band called, Sloth Loves Chunk. The pink outfit is donned for the rendition of Electric Six's Gaybar.... complete with dance routine to a packed pub most places on the island, but as this is all about Ramsey, that would be er, the Britannia pub then. In fact I know it was as I spent the night snapping away, on free Jack Daniels, and enjoying the set... especially Wolfmother "Woman" and Foo Fighters "Monkey Wrench". That's just like a big hint there to keep those in the set lads and nothing whatsover to do with the blog. Now if you're on Facebook and on the island you can follow the band and turn up and support them. If you live off island you are probably still pondering why he has pink fishnet gloves on and could I not have used my first post back to show you a pretty sunset or a little snippet of history re Ramsey or the a local news event. What do you think this is a travelogue! I live here and you will see Ramsey as I do.

Sure you're happy with the once and future Queens return?
Posted by Jane Hards Photography at Tuesday, October 12, 2010

B, welcome back. So funny.

Thank you Pam and do check the band. Pretty awesome. Still funny, or bonkers.

I have the same pink fishnet stockings and i also wear them on my arms!

Too long away, made me lol. I was at this the Brit. They are good.

Jabblog cheers and Jim I can see you with same hat too in Texas. RM it was packed out that night, but what a set. Good to see I still make you laugh and I hope your new house finally got built.

I am happy to see you again. I missed your lively accounts of what had happened on your island!

Welcome back, O Queen of Colour!

Reader Will, it has been a while and maybe I do as Buck says Colour the island a little too much, not the photos the writing. Just for fun of course.

Welcome back. Right on, show us the real Ramsey. I may never get there other than thru your blurry eyes. Share what you will you witty womyn.

Funny as ever. Be back soon blogging too in the New Year. Missed you and your island photos.

Good to see you here again.

Bring on the REAL Ramsey, we can take it. Welcome back B, you've been missed. Nobody can cut up like you, or have a full blown rant at the drop of a hat! :)
V

I've missed the barbed wit and acid tongue of the mistress. Welcome back B. Hope he gave you your tights back by the way!

Well yes, I was sort of expecting a family-friendly travelogue. Pink Fishnet Arm Protection? On the Isle of Mann??? Egads. What will the Queen say???

Welcome back, Babooshka. I'm confident you'll find another sunset eventually ... they are relatively common place. Especially when compared to the rarity of today's post. LOL!!

I"m thinking I need me some hot pink fishnet.....something or other, Your Royal Highness! :)
V

Welcome back and love your entrance.

Ha Ha all. I'm onto round 2. Thanks for the welcome back and promise sunsets coming, and the writing will be as a off the cuff as ever.

Happy? Happy? I be thrilled beyond speech m'lady. You've no idea.

Pink fishnet gloves and all.