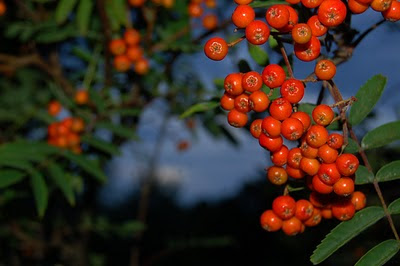 Abc this week is bought to you by the letter O

I know what you're thinking,( actually I don't. I don't presume to be a mind reader) shouldn't that be "b" for berry? Well it could be be next time around, but today we have a slight twist on the letter and we are concentrating on the berry part of the image.


Oghyr simply means berry in Manx. "What the hell is Manx" some of you out there are asking (again maybe not... I don't presume anything) "and what is she on about." For those not familiar with the blog, Manx is the old language spoken on the island on live by some folks. So fortunately when it comes to Abc I can taken blatant liberties and trawl through the Manx language to match any word to any image. Cool. Oghyr is not the only Manx word for berry, just the only one beginning with O. Others are - berrish, caor, semyr and soo. The photo taken along the bridle path, though I have never once seen a horse down there, escaped wallaby or Manx fairy.

if i was an escaped mallaby, its where i would be...smiles. nice capture...

Do you speak Manx too? Hats off again.

Fun post as always and I'm always glad for a smile! Whatever it starts with, it's a gorgeous color and looks delicious although it could poisonous as far as I know! But, hey, I'm looking at a great photo and it looks delicious! Guess the horses or their riders don't know what they're missing! Hope your week is going well!

Nope don't speak Manx. I do seem to be having a poisonous food week I've just noticed Slyvia.

It resembles what what we call Rognebær in Norwegian. Famous for being extremely sour, but supposed to make a nice wine.

I like how you are cleverly sneaking son Manx words into our vocabularies. Oghyr? Now, how to slip this into some polite conversation? :)

EG Wow, how about some Manx swear words?

Ahhhhh you're a clever gal, I say! And I'm really luvin that pic!

Gorgeous image! Love the contrast to the blurred background.

What a hOOt this is. Still laughing and thinking Manx must be the best language!

Brilliant photo, - I would need instructions on how to pronounce oghyr with some suavity if I was going to use it in conversation.

Nice oghyrs. Which I at first thought was like a troll kind of creature to go along with the Manx fairies. Wondering if these are as poisonous as the last red plant.

Fascinating post, and I do love the image of the berries. I always have to stop and take photos of berries if I see them - the colours make me do it!

What gorgeous oghyrs you have here.

Love the photo but am glad I don't have to learn Manx. Remember when I lived in Wales I thought I'd try Welsh...forget it. Three different words for 'yes' I seem to remember. I don't remember how many there were for NO! As I said earlier, good to see you back!

Funny post, Babooshka ! Great idea to use words from your native language; I can do that in Dutch for instance with IJ/Y or Z.
Thanks for your visit and comment. Is Manx a kind of Celtic language?

It's different,thanks a lot for teaching us a new "word",I'm always learning with blog friends! :)
Hugs
Léia

Fabulous to have the Manx language at your disposal! But, don't quiz me on any of it! ; )

Didn't know a thing about Manx until this post. Sent me running to Wikipedia to find out what language group it belongs to. It's incredible that Europe still has pockets of ancient languages that survive and in many cases thrive. Cool post.

Hey, I can't view your site properly within Opera, I actually hope you look into fixing this.

Anonymous, love to fix the problem re Opera, but that would be a Blogger Site issue. Maybe send them a message.

So, looks like I need to delve more into the language. Cheers all for stopping by and letting me get away with the madness.

You must be good at "Scrabble" with all those alternate Manx spellings of words!

Believe it or not, we have these or something similar. I'm off to shoot some for you B
V

A second language is always a fine thing, especially for memes like ABC! Lovely photo, by the way. Are those berries edible, I wonder? I'm guessing not.

Wow! It is so encouraging to read posts like yours - truly inspirational and so creative - a real ABC follower!
Thanks so much for contributing such a well thought out post......
arghhhhhhhh soon be 2011 and the countdown begins!
Denise
ABC Team