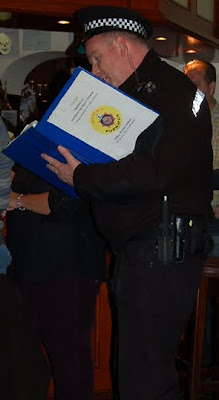 Honestly he is working


This week Abc is bought to you by the letter P


Now, to be serious for once, "Pub Watch" is an island wide project that keeps an eye on the drinkers who frequent the pubs, one of which is yes, me. So far, the wearing of cowboy, witch and pirate hats is not an offence ( not sure about the coppers hat I wore mind) and enjoying your Jack Daniels and causing minor havoc with broomsticks for Halloween seems to be considered reasonable drunken behaviour. If I had hit someone with the broomstick for example, considered an act of drunken violence, then I would have not only been arrested, charged with an offence, sentenced or fined, but ultimately banned from the pub. Not just the pub in question but all pubs... "island wide", all pubs on the island. That is in essence what Pub Watch is, well the lighthearted version of it. So the Police, (not the group) frequenting the joint are a regular sight and anti social behaviour won't be tolerated. Also, I do wish they would apply the same rules and regulations to people murdering Meatloaf's "Bat Out of Hell at Karaoke." Personally I really think there should be a town bylaw against it!


So, do you have any scheme like this your way. Also for more P's of the world see here
Posted by Jane Hards Photography at Tuesday, November 02, 2010

As is frequently the case, your post made me smile, then giggle and finally laugh out loud and all three were badly needed today! Thank you, Babooshka! I hope you're having a real hoot of week so far!!

I know him! LOL again.

Well, I am not allowed to use the bathroom at work after hours or I will get fined. Does that count?

This was positively hilarious. I've never heard of pub watch before. I think karaoke in general would be a perfect candidate for banning due to being a public nuisance, most of the time. Great take on the letter P.

Pub Watch? I would definitely watch my Ps and Qs when at the pub. :)

Pub Watch...how interesting. keeping everyone towing the line must be an interesting job...you made me laugh with your comments.

Years since last i've been to a pub. Thank you for the memories. Please have a safe road ahead for you and a good Wednesday as well.

Pub watch-who'da thought? Great idea, I think-a form of social control without really having to pass yet another law.
And, who would want to be on that list and banned from all pubs on the island? Certainly not I!

And do they serve donuts at the pub?

No, I think here you're allowed to make an arse of yourself till someone takes you home! :)
V

Well, I don't know that we have any such thing going on here in Portland. We do have, from what I hear, pub crawls which mean I suppose going from pub to pub or bar to bar, having a drink, sharing in some talk and laughter, from place to place. Then in December there's SantaCon which involves lots of people dressed like Santa mixed with a pub crawl--it happens in lots of other cities, too.

Never heard of pub watch before, what a great post for P!!
P is for poncho

That's an excellent idea ! They should do that at the Red Sea with the Russians or rather Russian speaking people! I have never seen people drinking so much from early morning to early morning !

No doughnuts Brattcat, but I know what you mean. V, made me lol. If I had a FB like button that comment would get it.

I would be in trouble in your pubs.

I'd love a Pub Crawl and not just a Pub Watch!
P is for private perception

Over on this side of the Atlantic, the police (local and state) get together in the streets near popular drinking spots and check drivers. Holiday drinking is a major cause of accidents here. Also, the bars and clubs (pubs) that have outbreaks of violence get their license suspended and sometimes are closed.

For a pub watch to work over here we would probably have to call in a battalion of special forces troops to visit the pubs. However, the unrulely bunch who wander through our area get sorted out by the neighbourhood watch.

Our streets were at one stage littered with broken bottles and the nights were filled with the sounds of raucous obscenities and fighting. If a friendly chat did not work, a burst of pepper spray always did the trick.