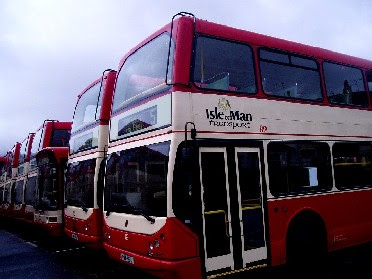 As it's sunday the buses will be off to a later start, which gave me the opportunity to photograph the the fleet before they set off. Yes that was all the buses that were leaving today, a small amount for a small island. You can see the first bus is going to Douglas via Peel which is great bus ride if you aren't in a hurry, and want to go the scenic route to Dougals. You can also see the wording is in English, but occasionally you will see locations written in Manx. Might even be both languages, with the island you never know.

Still like opinoins on yeterdays' photo, art or graffiti. So far art is ahead. Wonder what the person who painted it it the first place intended it as?
Posted by Jane Hards Photography at Sunday, March 30, 2008

That's a lot of buses! You must get plenty of tourists.

I'm looking forward to seeing more of the Island.

I wonder how long it would take you to view all the island by bus?